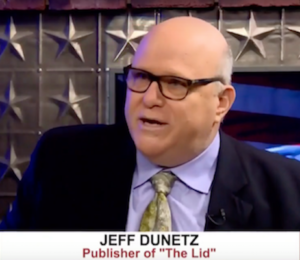 Today on the Lid Radio Show our guest is Lori Lowenthal Marcus the founder and president of Z STREET, an unabashedly Zionist organization. But more than that Z STREET was the first group to sue (and beat) the IRS regarding it’s targeting of conservative organization. The show starts at 2PM Eastern, You can listen at SHR Media and High Plains Talk Radio or via the player embedded below.

In August of 2010, almost three years before Lois Lerner announced at a law conference that the IRS had indeed targeted certain groups,Z STREET, filed a lawsuit contending they were being targeted by the IRS because they disagreed with the President’s policy on Israel. In fact, Z STREET filed their suit against the IRS after an agent allegedly told them his direction was to “give special scrutiny to organizations connected to Israel,” and that the files of some of those “organizations were sent to a special unit in Washington, D.C. to determine whether the activities of the organization contradicted the public policies of the administration.” In the end it was this law suit that established that it was unconstitutional for the IRS to practice viewpoint discrimination.

Lori is a graduate of Harvard Law School, she previously practiced First Amendment law and taught in Philadelphia-area graduate and law schools. She is also the U.S. correspondent for The Jewish Press online, and founder of the group “Jews Choose Trump.” Lori can be followed on twitter @LoriLMarcus and facebook

During the show  come into the chat room (at SHR Media or embedded below) to ask questions or comment.

The show player and the chat room are below:

Today’s Lid Radio show at 2PM EDT is going to GREAT, so make sure t

o listen via the player above or by clicking on the SHR Media or High Plains Talk Radio‘s network link Oh and along with the Lid Radio show everyWednesday (Repeated on Monday and Friday) on SHR Media and High Plains Talk Radio. I  can be followed  @yidwithlid on twitter, on my site  Lidblog.com , on Facebook, in the Jewish Star newspaper, and on MRCTV.org.

See you on the Lid Radio Show you at 2PM Eastern.