Time for Israel to Arrest the American Spys 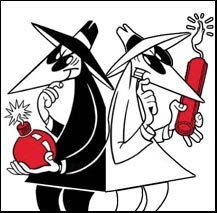 Israel is teaming with spies from all countries, even from the United States. It has one of the most advanced technology development infrastructures in the world. You gotta believe that our spies are crawling all around the place trying to earn each new development in defense technology. You can even bet that Israel knows who the spies are and who they are working with. But Israel never arrests any spies from the United States. But maybe that should change. Maybe its time for Israel to start arresting all the Spies that the United States has in the holy land. And If they do I don’t care if the press calls it “tit for tat” because it would be.
The US is targeting Israel for some reason, this whole Ben-Ami Kadish thing smells rancid. If this guy was such a hotshot spy, why would the US wait almost 30 years, till the suspect was 85 and living in a retirement community in New Jersey, to arrest him?Folks I guarantee that this has more to do with Condoleezza Rice wanting to put more pressure on Israel than putting an 85-year old ” alter cocker” in Jail. This move was made to embarrass Israel and weaken her support in congress and with the American people. Condy is not happy that Israel refuses to comply with everything she wants, and this is her way of punishing the Jewish State and keeping its feet to the fire. The other thing it does is quiet the American Jewish Community a bit as it will bring up dual loyalty questions.

For the FBI/CIA it has a bonus effect. With the end of Bush’s second term there will be additional pressure to grant a presidential pardon to Jonathan Pollard, something the two organizations have been fighting for years. The two groups will now link the Pollard with Kadish and work to ensure that Pollard continues to rot in Jail longer than anyone else convicted of his crime.

The Case of Ben-Ami Kadish, an alter “cocker living” in a New Jersey retirement home has very little to do with spying and much to do with going after Israel. Its a shame that Condi and her Arabist State Department have sunk so low. And they ONLY way they will stop is by arresting some of the US spies: