Time For The Democrats To Get Serious About the Terrorist Threat 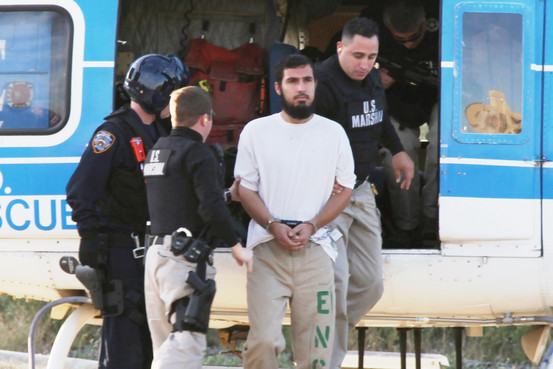 Last week our intelligence service broke up three major terrorist plots that had the potential of killing thousands of innocent Americans. One of the reasons these attacks were detected and broken up was the Patriot Act.

Two major provisions of the Patriot act are coming up for renewal:

These two important provisions will expire soon unless they are renewed by Congress. But the Democrats are in charge of Congress, and this progressive Democratic-run congress has yet to get serious about the terrorist threat:

Intelligence Averts Another Attack Why do Democrats in Congress want to change key laws that have helped to discover terrorist plots?
By MICHAEL B. MUKASEY

One would think that the arrests last week of Najibullah Zazi, charged with plotting to bomb New York City subways—and of two others charged with planning to blow up buildings in Dallas, Texas, and Springfield, Ill.—would generate support for the intelligence-gathering tools that protect this country from Muslim fanatics. In Mr. Zazi’s case, the government has already confirmed the value of these tools: It has filed a notice of its intent to use information gathered under the Foreign Intelligence Surveillance Act, which was specifically written to help combat terrorists and spies.

Nevertheless, there is a rear-guard action in Congress to make it more difficult to gather, use and protect intelligence—the only weapon that can prevent an attack rather than simply punish one after the fact. The USA Patriot Act, enacted in the aftermath of 9/11, is a case in point.

This law has a series of provisions that will expire unless Congress renews them. Up for renewal this year is a provision that permits investigators to maintain surveillance of sophisticated terrorists who change cell phones frequently to evade detection. This kind of surveillance is known as “roving wiretaps.” Also up for renewal are authorizations to seek court orders to examine business records in national security investigations, and to conduct national security investigations even when investigators cannot prove a particular target is connected to a particular terrorist organization or foreign power—known as “lone wolf” authority.

Roving wiretaps have been used for decades by law enforcement in routine narcotics cases. They reportedly were used to help thwart a plot earlier this year to blow up synagogues in Riverdale, N.Y. Business records, including bank and telephone records, can provide important leads early in a national security investigation, and they have been used to obtain evidence in numerous cases.

The value of lone wolf authority is best demonstrated by its absence in the summer of 2001. That’s when FBI agents might have obtained a warrant to search the computer of Zacharias Moussaoui, often referred to as the “20th hijacker,” before the 9/11 attacks—although there was no proof at the time of his arrest on an immigration violation that he was acting for a terrorist organization. But a later search of his computer revealed just that.

Rather than simply renew these vital provisions, which expire at the end of this year, some congressional Democrats want to impose requirements that would diminish their effectiveness, or add burdens to existing authorizations that would retard rather than advance our ability to gather intelligence.

One bill would require the government to prove that the business records it seeks by court order pertain to an agent of a foreign power before investigators have seen those records. The current standard requires only that the records in question do not involve a person in the United States, or that they do relate to an investigation undertaken to protect the country against international terrorism or spying.

The section of the Patriot Act that confers the authority on investigators to seek these records was amended in 2006 to add civil liberties protections when sensitive personal information about a person in the U.S. is gathered. It passed the Senate overwhelmingly with support that included then-Sens. Barack Obama and Joe Biden.

The same proposed legislation would make it harder to obtain a real-time record of incoming and outgoing calls—known as a pen register—in national security cases. It does so by requiring that the government prove that the information sought in this record relates to a foreign power. Currently, the government can obtain a court order by certifying that the information sought either is foreign-intelligence information or relates to an investigation to protect against foreign terrorism or spying.

While the changes may sound benign, they turn the concept of an investigation on its head, requiring the government to submit proof at the outset of an investigation while facts are still being sought. In any event, a pen register shows only who called whom and nothing about the content of the call, and thus raises none of the privacy concerns that are at stake when a full-fledged wiretap is at issue. Moreover, the underlying information in a pen register is not private because telephone companies routinely have it.

Other proposals target national security letters, known as NSLs, which are administrative subpoenas like those issued routinely by the FBI and agencies as diverse as the Agriculture Department and the IRS to get information they need in order to enforce the statutes they administer. One Democratic bill would impose a four-year sunset on the FBI’s authority to issue such letters where none exists now. Another, the “Judicious Use of Surveillance Tools In Counterterrorism Efforts Act of 2009,” would bar their use entirely to get information about local or long-distance calls, financial transactions, or information from credit reports.

But this is precisely the kind of information that would be useful to an investigator trying to find out who a terrorist is calling or how much money he is receiving from overseas. The FBI already has the authority to obtain this kind of information in cases involving crimes against children. The Drug Enforcement Administration has it in drug cases. There is no sense in giving investigators in national security cases less authority than investigators in criminal cases, and in criticizing them for failing to connect the dots while denying them the authority to discover the dots.

Mr. Zazi’s arrest is only the most recent case in which intelligence apparently has averted disaster. Cells have been broken up and individual defendants convicted in New York, Virginia, North Carolina, Oregon, Texas and Ohio.

But a disaster once averted is not permanently averted, as the writer Jonah Goldberg has noted. After the 1993 World Trade Center bombing killed six people and injured hundreds, Ramzi Youssef, the mastermind, was caught, convicted and put in the maximum security prison at Florence, Colo. Nonetheless, the World Trade Center towers are gone along with thousands of people. Those who indulge paranoid fantasies of government investigators snooping on the books they take out of the library, and who would roll back current authorities in the name of protecting civil liberties, should consider what legislation will be proposed and passed if the next Najibullah Zazi is not detected

Study: Most U.S. Voters Would Fail Citizenship Test (Proving The Need For A Civics Curriculum)
June 22nd, 2021 The Lid