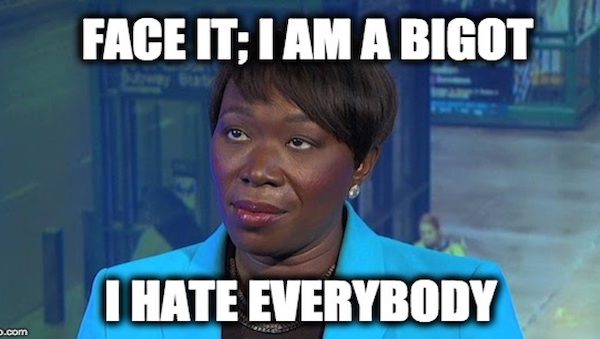 MSNBC’s Joy Reid has a history of bigotry and creating racial falsehoods about conservatives. Her latest falsehood was the suggestion that Senator Tim Scott (R-SC) was simply a GOP token, which came last week after Scott participated in a GOP press conference of Senators who opposed raising the federal minimum wage to $15 per hour. Tim Scott slams Joy Reid

Senator Scott snd former congressman Trey Gowdy blasted the bigoted MSNBC anchor Joy Reid after she said on her program, “You’ve got to love Tim Scott standing there to provide the patina of diversity over that round of words, that basket full of words.”

"You gotta love Tim Scott standing there to provide the patina of diversity" – @JoyAnnReid@SenatorTimScott is not a prop, Joy. pic.twitter.com/NtxCZcaIzZ

"Woke supremacy is as bad as white supremacy—we need to take that seriously… Matthew 5:44 ['But I tell you, love your enemies and pray for those who persecute you'] is still available to be read."

Scott further eviscerated Reid on social media, tweeting, “Unfortunately, I have become accustomed to hearing casual racism and insults from the ‘tolerant left.”

Unfortunately, I have become accustomed to hearing casual racism and insults from the “tolerant” Left. For a party and movement that claims to embrace diversity and tolerance, they sure seem to hate hearing my story or hearing my perspective. https://t.co/NyDtcIkp2e

Gowdy, the former Representative from South Carolina and a good friend of Scott, also took some shots at Reid for her vile comments saying, when [Reid] calls a United States Senator who’s a subject matter expert a prop, a token, or a superficial covering, that’s personal, and that’s wrong, and she should be held to account. He can stand wherever the hell he wants to stand,” he shot back, “because he’s earned the right to be there.”

Reid has a long history of spewing bigotry.

Reid has attacked people of Christian faith, claiming there were too many Catholics on the U.S. Supreme Court to rule on the Hobby Lobby case, and she’s compared “Christian beliefs to ‘Something out of a novel. In 2018   posts displaying her hatred of Gay people were discovered. She also photoshopped a picture of Sen. John McCain suggesting he was responsible for the Virginia Tech massacre and was revealed as a 9/11 “truther.”  ]Joy Reid is not a fan of Mexican immigrants, believes the anti-Semitic canard that Jews and Israel control American foreign policy, spewed the modern version of the anti-Semitic blood libel, and much more.

"Do any of you guys trust Uncle Clarence…" pic.twitter.com/a0TLxmFfPY

Last week she claimed, “people on the right would trade all the tax cuts for the ability to openly say the n-word like in “the good old days.”

I’ll say it again: people on the right would trade all the tax cuts for the ability to openly say the n-word like in “the good old days.” To them, not being able to be openly racist and discriminatory without consequence is oppression. Trump is the avatar for this “freedom.” https://t.co/RlqAFYe5Zr

Sorry Joy, but as a person on the right, neither I nor any conservative I’ve ever met have had a desire to openly use the n-word. However, to be honest, I’ve had the urging to use the p-word like in “Joy Reid is a bigoted putz.”

Suggesting that Tim Scott is a token is just the leftist Reid’s attempt of branding the GOP as racists.

Popular in his state, Scott has received over 60% of the vote in each of his two Senatorial elections.  Scott’s a valuable member of the GOP Senate caucus, not because of his skin’s pigment but because he is intelligent, has a solid background as a conservative, and comes up with creative ideas to solve problems. For example, the opportunity zones created in the 2017 tax cut bill he developed with President Trump. The zones increased private investment into minority neighborhoods helping to increase the standard of living.

If the woke/cancel culture really cared about people’s racist words and deeds, they would have gone after the bigoted Joy Reid a long time ago. Not that I would approve, the First Amendment guarantees haters like Joy Reid can spew venom all she wants, just as it allows fair-minded people such as Tim Scott, Trey Gowdy (and me) to point out the ignorance of her divisiveness.