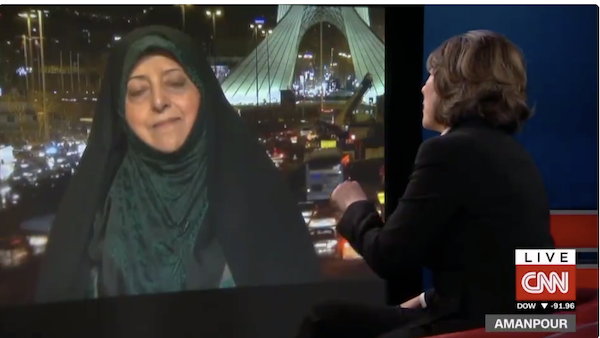 In one of her latest pieces of so-called “journalism.”Christiane Amanpour interviewed a terrorist who in 1979 threatened to kill American hostages,

Iran’s VP just happens to be one of the students that took the American Embassy and held hostages in 1979.

She also threatened to kill those hostages.

Iranian Vice President Massoumeh Ebtekar: “The American president made a serious miscalculation, they made a serious mistake by assassinating, by taking this terrorist action, against Commander Soleimani, and I’m sure that they regret what they have done.” pic.twitter.com/KTQgPNjGBP

Amanpour failed to mention her guest’s background. But looking at the CNN reporter’s history it makes sense that she didn’t. Amanpour, the Chief international correspondent of Cable News Network, grew up in Tehran, where her father was a shill for the Shah’s government. Since the Shah’s overthrow Christiane, a Roman Catholic, has been making up for her father’s support of the Shah by supporting Islamist Terrorism every chance she has. In the past she has mocked the fears of a nuclear-armed Iran, claiming the West has made that nation a “bogeyman.”

The interview with the terrorist may not be a new low for CNN (there are so many lows), but the bar is certainly not being raised.

Shame on you Amanpour, She took Americans hostages 40 years ago when she seized USA embassy in Iran. Even today she was asking ppl to chant “Death to America” Shame on You Amanpour , U are a disgrace to Iranian. This is Ebtekar 40 years ago. pic.twitter.com/oHTACLOMHM

CNN Gives Friendly Interview to Iranian Woman Who Said She Would Kill U.S. Hostages in 1979

On Tuesday night, CNN aired an interview between its international anchor Christiane Amanpour and Masoumeh Ebtekar, currently Iran’s vice president for women and family affairs. Amanpour did not once mention Ebtekar’s connection to the Iran Hostage Crisis in 1979, however. Ebtekar was one of the pro-Islamic Revolution students who seized the U.S. Embassy. She herself said she would personally shoot U.S. hostages in the head if American troops came to liberate the hostages.

In a brief segment cut from a 15-minute interview, Amanpour asked the Iranian leader whether the strike that killed Quds Force leader Qasem Soleimani had brought Iranians together.

Massoumeh Ebtekar left out that the Iranians may be united, but based on the past few days, they are united in their hatred of the ruling theocracy.

Here are some of the responses Amanpour received on Twitter, courtesy of Legal Insurrection…

This one is from our Ambassador to Germany.

Outrageous. @camanpour should explain how this happened. https://t.co/0yvHhOU7Lh

Amanpour's guest is @ebtekarm, the same woman that climbed up american embassy walls in 79 and took americans hostages and said she is willing to sh**t them. She didn't mention who this woman is to her audience.
Pl. Watch this 2min clipp@EliLake @BenWeinthal @RichardGrenell pic.twitter.com/0UeDJrSrYH

CNN aired Iranian propaganda accusing America of “terrorist action.” The guest was spokeswoman for the Islamic revolutionaries of '79. She once threatened to shoot American hostages.

In other words, @CNN let a terrorist on air to accuse us of terrorism.https://t.co/u8PHpRu43Q

The ironic thing is that many Average Americans seem to remember the horror that CNN is not acknowledging.

I was 10 years old when the Iran Hostage Crisis began and 11 when it ended.

For 444 days, we watched it on the evening news every single night and CNN seems to act like The Iran Hostage Crisis never happened.

CNN entered the picture in 1980, but many of the people that work there remember and know the truth.

They simply choose to ignore it.

CNN has gained quite a reputation for Fake News.

This is not news America. And Christiane Amanpour has reported a flurry of CNN fake news on her own

The Onion would be embarrassed with some of CNN’s stories.

What a slap in the face to interview one of the Iranian terrorists who seized our embassy and threatened to kill hostages in 1979.

CNN, especially Christiane Amanpour does not act as if it cares about America.

We must keep spreading the news about CNN’s lies so everyone will finally tune them out.