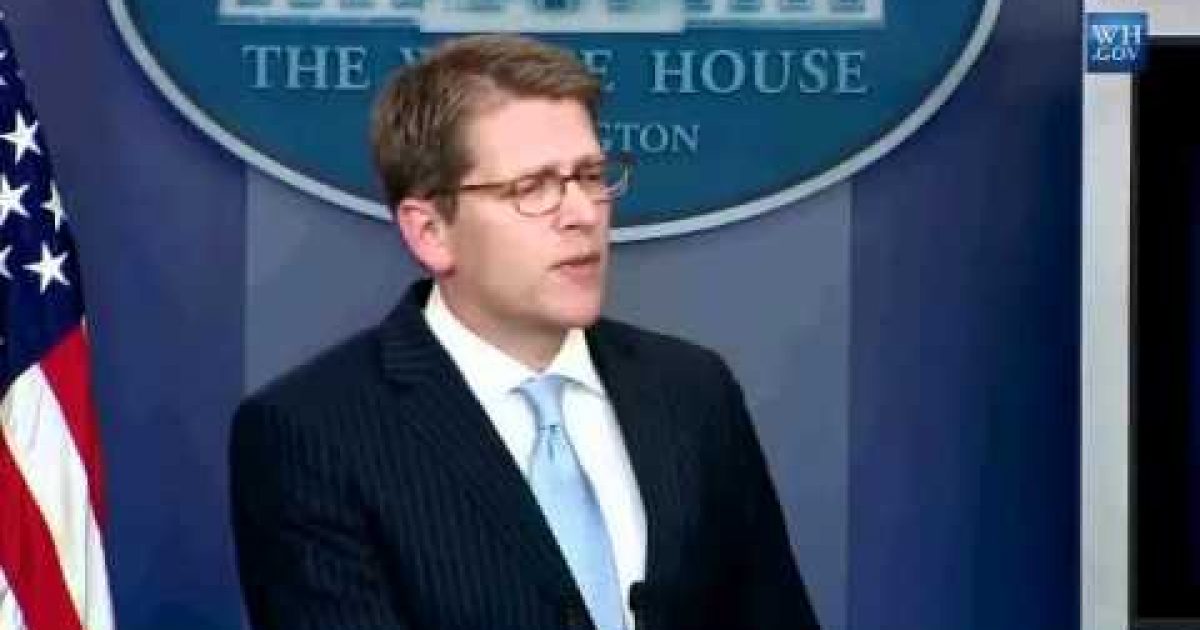 Note this was originally written by me for TruthRevolt as the top NINE lies by Jay Carney, I’ve added a number ten and present the entire
list below.

In April of 2002 White House press secretary Jay Carney offered some important insight into his job. Speaking at a scholarship lunch hosted by the White House Correspondents’ Association, he said he never lies in response to reporters’ questions, even when he knows more than he can say: “When I go stand up at the podium in front of the White House press corps, I never lie. I never say something that I know is untrue. Credibility is enormously important to a press secretary.”

Of course when Carney made that statement, he was lying about never lying. In fact this press secretary offered up many a falsehood during his tenure of protecting President Obama from his errors, omissions, and scandals. To celebrate Mr. Carney’s announced resignation, we offer his top 10 lies as press secretary:

1) Last month when it emerged that deputy national security adviser Ben Rhodes had written an email directing Susan Rice to emphasize the YouTube video story during her Sunday news show appearances, Carney told the press corps the Rhodes email “was explicitly not about Benghazi.”

2) In mid-May 2014, Carney announced that the American Legion had praised the Department of Veterans Affairs for the “resignation” of top VA health official Dr. Robert Petzel. Carney was only off by 100%. The actual American Legion statement was, “the move by VA is not a corrective action, but a continuation of business as usual. Dr. Petzel was already scheduled to retire this year, so his resignation now really won’t make that much of a difference.”

3) Carney told reporters at the White House press briefing on November 28, 2012: “Those [Benghazi] talking points originated from the intelligence community. They reflect the IC’s best assessments of what they thought had happened. The White House and the State Department have made clear that the single adjustment that was made to those talking points by either of those two institutions were changing the word ‘consulate’ to ‘diplomatic facility’ because ‘consulate’ was inaccurate.” But six months later, in May 2013, ABC News reported the edits included requests from the State Department that references to the Al Qaeda-affiliated group Ansar al-Sharia be deleted, as well references to CIA warnings about terrorist threats in Benghazi in the months preceding the attack.

4) In April 2012, Carney said the President had never argued the so-called Buffett Rule would solve the country’s deficit problems. Perhaps he didn’t remember when the Buffett Rule was first introduced in September 2011: President Obama claimed the tax would “stabilize our debt and deficits for the next decade.”

5) During the 2012 election, Hilary Rosen, Democratic Party consultant, said Ann Romney had “never actually worked a day in her life.” It turns out that Rosen hadvisited the Obama White House 35 times. Carney told reporters it might be adifferent Hilary Rosen, and that he personally knew three people named “Hilary Rosen.” Rosen herself said she was the only Hilary Rosen she had met before.

7) October 2013 saw millions losing their healthcare plans thanks to Obamacare. On October 31st, after weeks of the news reporting horror stories of people losing their insurance, Jay Carney was still hanging on: “The fact of the matter is, if you had insurance on the individual market prior to the passage of the Affordable Care Act, and you have that plan today, you can keep it, you’re grandfathered in forever. No matter how crummy the plan is.”

8) Jay Carney repeated over and over that the IRS scandal was limited to a few rogue employees in Cincinnati. He even fought with Joe Scarborough about it. That was false.

9) In January 2014, Carney told Major Garrett that the 7 million Obamacare enrollment goal was never a White House figure, it was a Congressional Budget Office estimate, and that other estimates varied. Even after Garrett interrupted him with, “Kathleen Sebelius said on Sept. 30 — this is a direct quote: ‘I think success looks like at least 7 million people having signed up by the end of March 2014,’”Carney continued to try and spin his way out of it.

10) In June 2013, White House press secretary Jay Carney was asked if the administration was considering a deal with the Taliban for Bowe Bergdahl.  His long answer ended with, ‘As we have long said, however, we would not make any decisions about transfer of any detainees without consulting with Congress and without doing so in accordance with U.S. law.’

Jay speaking for all bloggers everywhere, we are going to miss you. You always gave us something to write about.