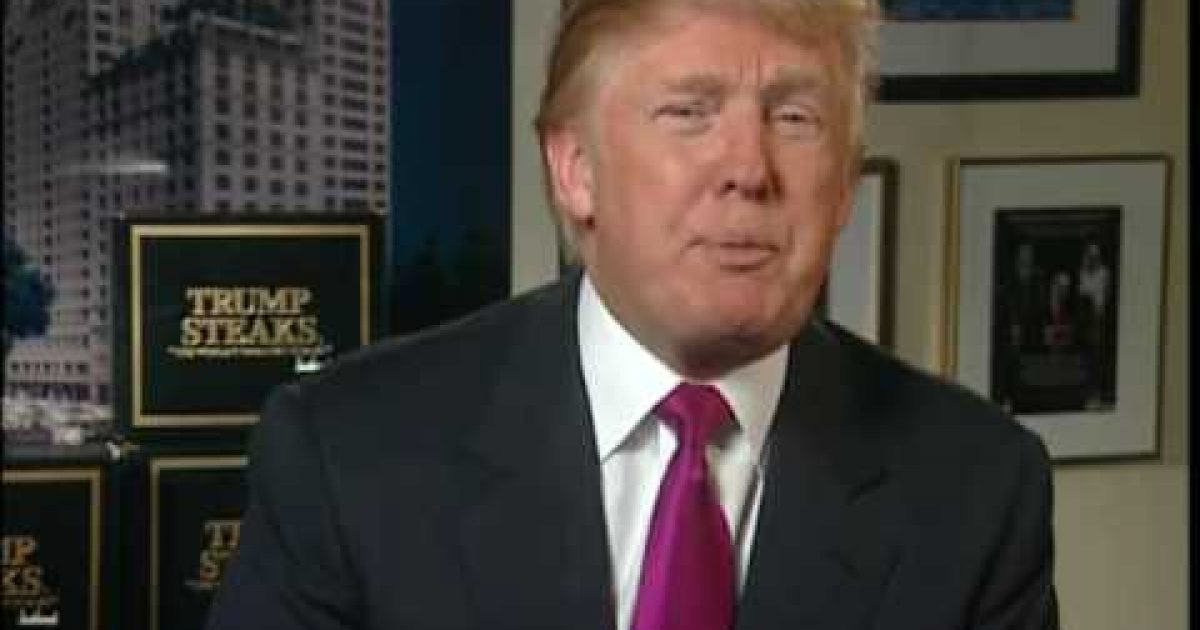 Part of the Donald Trump appeal is that he is a great businessman, and he certainly has taken his dad’s business and grown it to big heights. But Trump is less of a business manager, and more of a marketing genius–a PT Barnum. He knows what to say and do to promote. It’s why he is leading in the polls, and why he gets all the free airtime from the media.

His record as a COO/Manager, etc. is uneven. He has built businesses and he has destroyed them, as witnessed by his four bankruptcies. The Donald will correctly say he has never filed for bankruptcy. What he has done is driven a business into the ground causing the business to go belly up.

Donald Trump is a great “talker” and promoter, and to be perfectly honest that is part of what we need in America. Certainly in his effort to become president he has talked an excellent game and so far he has been lucky that there has been few attempts to back up his promoting skills.

America needs need much more than a promoter and bloviator, we need someone who can “manage,” and the record shows Trump is not the best at managing.

Trump keeps saying he is a winner/he doesn’t lose…That’s not true, including the four bankruptcies, here are twelve times where he has lost:

What happened: Trump launched his own mortgage company, and his son predicted that it would be the No. 1 home-loan lender in the US. And then … the housing market completely crashed in 2007. Trump’s mortgage company was shut down after a year and a half.
​
Shortly after the company’s launch Trump said on CNBC: “I think it’s a great time to start a mortgage company … who knows about financing better than I do?”

What happened: Trump launched his name-brand steaks specifically for Sharper Image (and naturally graced the cover of the Sharper Image catalogue) in 2007. They have since been discontinued.

What happened: Trump dipped his toes into the “super premium” vodka industry around 2006. It’s unclear when exactly Trump Vodka was shut down, but by 2011 the drink was no longer being produced “under the Trump trademark because the company failed to meet the threshold requirements,” Trump’s people said, according to Gothamist.

However, perhaps Trump should have considered expanding into the global “super premium” vodka market. Much to his annoyance, in 2011 Trump’s name-brand vodkas were being sold in Israel without authorization.

What Trump said about the vodka when it launched: “By the summer of ’06, I fully expect the most called for cocktail in America to be the T&T or the Trump and Tonic.”

What happened: Trump first released his own pseudo-Monopoly board game in 1989, but it didn’t sell well at all and was discontinued after a year. After the success of his TV show, he revived and updated the game in 2005.

You can still purchase the game today via several online retailers.

What Trump’s promo said: “Parker Brothers and Donald Trump are challenging consumers to determine whether they have the brains and the brawn to be the next Donald Trump with the launch of TRUMP the Game, the new high-stakes board game, where if you play your cards right, you can make hundreds of millions of dollars, just like The Donald.

What happened: Trump Ice has been available at Trump’s casinos for some time, and according to Trump “it was so good that people wanted to buy cases of it!” So the bottles were produced and distributed to the masses. They never hit it big.

You can still find bottles on eBay if you’re interested in tasting the “purest” bottled water. And although it was discontinued, the official Trump website says that you can find Trump Ice at “specialty food stores and grocery chains nationwide.”

What Trump said about the bottle design: “It is fiery, isn’t it? It’s fire and ice! The water puts out the fire.”

What happened: GoTrump.com was a search engine for bargains on luxury travel deals. It was powered by Travelocity.com, so it started off pretty well. However, the site was quickly ripped apart by critics, and it was shut down after a year.

What Trump said when he launched the site: “It doesn’t matter how rich you are. You don’t want to be a fool and you want to get the best deal. But people who aren’t rich want to associate with rich, and that’s why this thing has become so crazy.”

“When you get millions of people using your service, and you get X dollars per person, it adds up to a lot of money.”

What happened: The Trump magazine was a collaboration between the Trump brand and what is now called Niche Media. It launched with glitz and loads of PR but was shut down after two years. According to the press release, “the quarterly magazine saw early success, cashing in on the booming advertising market for yachts and other high-end commodities.”
2007 to 2009 was probably a difficult time for the “booming advertising market for yachts.”
Before the first issue came out, The New York Times asked whether Donald Trump would be on the first issue’s cover.

How Trump replied to that: “Only if they want to sell a lot of magazines.” Ultimately, his daughter Ivanka Trump graced the debut issue’s cover.

What happened: Donald Trump originally owned the The New Jersey Generals — a United States Football League team — but quickly sold them to focus on construction projects like the Trump Tower. Later he changed his mind, reacquiring the team in 1984.

The team folded one year later, in 1985, along with the entire USFL. People blamed Trump for the demise of not only the team, but the entire league. The league had been successful when it played in the spring, but Donald Trump insisted they moved the season to the fall and compete with the NFL. Allegedly, he was trying to pull the Generals into the NFL — and made poor investment decisions in the process, as the USFL was trounced by the NFL.
In May 2014, Trump expressed interest in buying the Buffalo Bills.

What Trump said: “Without me, the USFL would have been dead immediately. It was a league that was failing badly … I did something I rarely do with the USFL. I went into something that was not good, not established. And it was failing. I knew that but I also went in for cheap. I bought something for peanuts.” He also called the USFL a “second-rate operation.” Source: United States Football League

What happened: Trump bought Eastern Air Shuttle in 1988, which had been running for 27 years between Boston, NYC, and D.C., and updated it to make it look more glitzy and Trump-esque. But because it was a short-distance airline, customers weren’t looking for a luxury experience — just something that was convenient. The style-savvy investment was a bust.
On top of that, the pre-Gulf War fuel prices were extremely high. The airline never turned profit, and Trump defaulted on his loans.

What Trump said about the airlines in retrospect: “It worked out well for me … I ran an airline for a couple of years and made a couple of bucks. The airline business is a tough business, [but] I did great with it.”
Source: Time

What happened: Trump Entertainment Resorts filed for corporate bankruptcy four times. The first time was after the Trump Taj Mahal’s construction in 1991. The next time was in 2004, when it “filed for voluntary bankruptcy after accumulating $1.8 billion in debt.” Next came 2008-2009, when the company missed a $53.1 million bond interest payment. (The stock dropped to 23 cents per share from $4.)

And finally, in September 2014, the company filed for bankruptcy once again. (The company still exists despite its bankruptcy.)

What Trump said about the bankruptcies in court: “I don’t like the ‘B’ word.” Additionally, during an MSNBC interview, Michael Isikoff asked Trump what exactly he was paid for if he “had nothing to do with running the company.”

And Trump replied to that: “Excuse me … Because of my genius. OK?” Source: ABC News

What happened: There’s a history of buildings that paid to be called “Donald Trump developments” but ultimately never became anything. One of these is Trump Tower Tampa.
Donald Trump said he never had any plans to develop the building himself and that he only licensed his name to other developers.

Nothing ever came of Trump Tower Tampa, and the buyers lost a lot of money on the deal. The site was finally sold in 2011 for $5 million.

What Trump said in retrospect: “[The buyers] were better off losing their deposit.”
Source: The Wall Street Journal

What happened: In 2005, Trump opened Trump University, a for-profit but non-accredited school where he would bestow his industry expertise upon the masses — aka anyone who forked over $35,000. That same year, he licensed his name to an affiliate program called the Trump Institute.

In 2010, four students sued the “university” for “offering classes that amounted to extended ‘infomercials,’ ‘selling non-accredited products,’ and ‘taking advantage of these troubled economic times to prey on consumer’s fears.'”
The “university” then changed its name to “The Trump Entrepreneur Initiative.
And in 2013, the New York Attorney General Eric Schneiderman sued Trump and Trump University for allegedly defrauding students.

The business officially ended operations in 2011.

Trump compared his ideas to Einstein’s in the “Trump University Entrepreneurship 101” official book: “Albert Einstein believed that a ‘Theory of Everything’ in physics unified the four primal forces of nature: gravity, strong nuclear force, weak nuclear force, and electromagnetic force. Our unifying theory for sustainable success in business is so much simpler. […] The Customer Is Everything!”

What Trump said about Trump University: “I went to the Wharton School of Finance … I have a great feeling for education and for knowledge and learning … I love the idea of helping people, because I’ve had a lot of experience with real estate, to put it mildly.” Source: The New York Times

Folks, I am not saying Donald Trump is a loser, what I am saying is like any showman he sometimes wins and sometimes loses. And when he does lose–based on the above, he really couldn’t give a rats arse about the people he’s hurt. Just imagine what he would do when he screwed up something in the White House.

If you are considering Trump, please think about that.