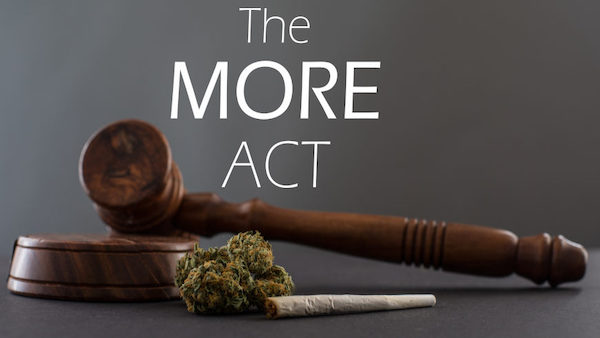 With our nation staring down an economic hardship, the likes of which we haven’t fathomed since the Great Depression, Congress is concentrating on something else.  the More Act

Marijuana legalization exists today in a majority of American states, in some form or another.  Some states, like Colorado and Washington, have made the plant completely legal for recreational use.  In other locals, THC is available via a doctor’s prescription. States like New York and cities like Atlanta, GA have decriminalized the drug, making possession for personal use a misdemeanor.

But these states are enjoying a sort of handshake agreement from the feds, as the plant remains illegal at the national level.

Congress could very well be on the path to changing that. Who knows, maybe it will start a new American industry that could create jobs and prosperity the likes of which we’ve never seen.

This week the U.S. House of Representatives is expected to vote on a bill that would remove marijuana from the Controlled Substances Act and require federal courts to expunge many prior marijuana offenses. It will be the first time the full House will vote on ending the federal prohibition of cannabis.

Morgan Fox with the National Cannabis Industry Association says House passage would “send a really strong message to not only the rest of Congress, but to a lot of other states that the time to end prohibition has come.”

The Marijuana Opportunity Reinvestment and Expungement Act (MORE Act), introduced by Rep. Jerry Nadler (D., N.Y.), would eliminate conflict between state and federal law and allow states to set their own marijuana policies.

Ah, Jerry Nadler. Now there’s someone who doesn’t need an incentive to get the munchies. I heard that he once, before he had the staple put in his stomach he had the munchies and went to McDonald’s, but he got stuck between the golden arches. The fired department finally got him to burst out by waving a twinkie in his direction.

“We don’t need to have one size fits all. We just need to get rid of prohibition and then let the states do what the states are doing. It’s essentially what the states have done already. They haven’t waited for the federal government, which is why we have a lot of these discrepancies and challenges,” said Rep. Earl Blumenauer (D., Ore.), who has long pushed for marijuana legalization.

Furthermore, the federal legalization of hemp for recreational use has made enforcement of marijuana laws far more difficult for police while also creating a cottage industry of shops and producers who are well-positioned to pivot to full-strength cannabis to speed in the economic boom that legalization promises.