The Lonely Position of Neutral 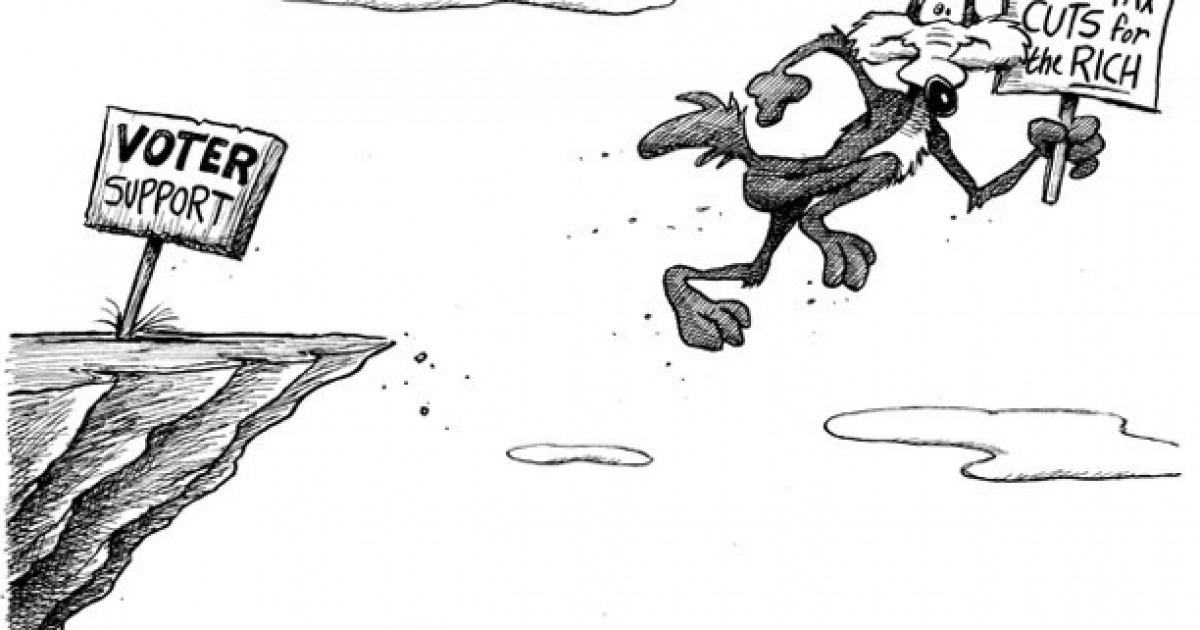 I hate raising taxes.  I find high tax rates immoral. However, we lost the election. An increase in revenue is inevitable. What’s perverse about this whole episode is that if we fall off the cliff – Democrats will get everything they want. They’ll get their tax increases, their revenue, and defense cuts. They would complete their decade-long project of ending the Bush Tax Cuts and gutting of the Pentagon. They have no incentive to meet us halfway, or negotiate in a meaningful way to make sure the markets don’t tank. They don’t need to. They won. In the meantime, Americans should prepare for the worst.

Since the tax hikes from falling off the cliff are far more severe, I’ve written in previously that Republicans will have to swallow the concept of raising taxes. However, there is latitude within this debate. Republicans should press Democrats to increase the tax rate on those making $500,000 a year, instead of $250,000. As George Will aptly noted on This Week a few months ago, a Chicago school principal with twenty years experience, who is married to a cop with twenty years experience, is almost rich in the eyes of the Obama administration. Cops and school principals aren’t your typical fat cats, hence this is an area where conservatives on the Hill could construct a narrative that this tax increase – within this particular income bracket – a) isn’t really hitting the rich and b) effects professions associated with the middle class.

There’s been some movement towards pushing the amount of taxable income above the $250,000 bracket, and addressing other areas relating to federal spending. As Lori Montgomery and Paul Kane at The Washington Post wrote on December 9, continued negotiations have produced the following:

Obama wants $1.6 trillion over the next decade, but many Democrats privately say they would settle for $1.2 trillion. Boehner has offered $800 billion, and Republicans are eager to keep the final tax figure under $1 trillion, noting that a measure to raise taxes on the rich passed by the Senate this summer would generate only $831 billion.

I like the fact that liberals are willing to increase the rates on those making $500,000, which we can fix if we retake Congress in the 2014 midterms. However, concerning the entitlement spending, I want deeper cuts that are also immediate. Nevertheless, the dynamic is the same – and it’s no love fest.

As Meredith Shiner and Daniel Newhauser of Roll Call wrote in the early morning hours on December 11:

…the primary differences between the two sides remain. Boehner’s office said the speaker is waiting for the White House to come back to Republicans with more spending cuts. And the White House says the president is waiting for the GOP to give more on revenue. Two years of fighting over how to rein in the federal debt is now coming down to two weeks of deal-making at best and he-said/she-said at worst.

“The Republican offer made last week remains the Republican offer, and we continue to wait for the president to identify the spending cuts he’s willing to make as part of the ‘balanced’ approach he promised the American people,” said Boehner spokesman Michael Steel, who confirmed conversations with the White House “are taking place” but declined to specify the nature of those talks.

White House Press Secretary Jay Carney told reporters aboard Air Force One that Obama has offered specifics on cuts — pointing to the president’s original deficit reduction plan that has repeatedly been dismissed by the GOP. Carney added that the Republicans are the ones stalling talks by not giving more detail on what they would be willing to do on revenue.

Frankly, both deals are bad. I’m not happy with either of them. I know that caving on our principles won’t make liberals like us better. Yet, as in the 2012 election, it’s all about messaging and making the argument. Barack Obama pervasively made the argument that Bush ruined the economy, and raising taxes will fix it. Mitt Romney and his communications team, which was always on defense, never made the argument against this claim. Conservatives don’t have the high ground in this fight.

Montgomery and Kane wrote that “a Washington Post-Pew Research Center poll last week found that a majority of Americans would blame the GOP if talks between Obama and Boehner fail to avert more than $500 billion in automatic tax hikes and spending cuts set to hit in January, potentially sparking a new recession.” Now, Pew and WaPo are left-leaning polls, but it doesn’t matter. It’s almost axiomatic that the GOP will be savaged by public opinion if we go over the cliff. While Democrats can take cover under a cloud of legitimacy and have the sober satisfaction that they’ll get what they want anyway, even if Republicans won’t budge on tax increases.

Our movement doesn’t need anymore setbacks right now. With the debt ceiling, that’s a different debate. But for now, we may have to hold our noses and increase taxes on people making $500,000 or more, which is the only (gulp) compromise Republicans should accept on revenue. They should also keep pressure on the White House for more immediate cuts to federal spending. Now, while some, like NYT’s Helene Cooper, say that Obama would own the recession if we fall off the cliff, I’m still dubious if that would happen. Some said that Obama’s extension of the Bush Tax Cuts in December of 2010 would be an albatross around his neck during his re-election campaign. It wasn’t. As I’ve said, I hate raising taxes, but the alternative not to, at this time, could be more damaging than the vote for them. It should give conservatives more incentive to win in 2014.

Right now, debt talks will probably remain in neutral as the car tumbles towards the jagged rocks below.