The IRS Lied: There ARE Backups of Lois Lerner Emails (but they’re too hard to get at) 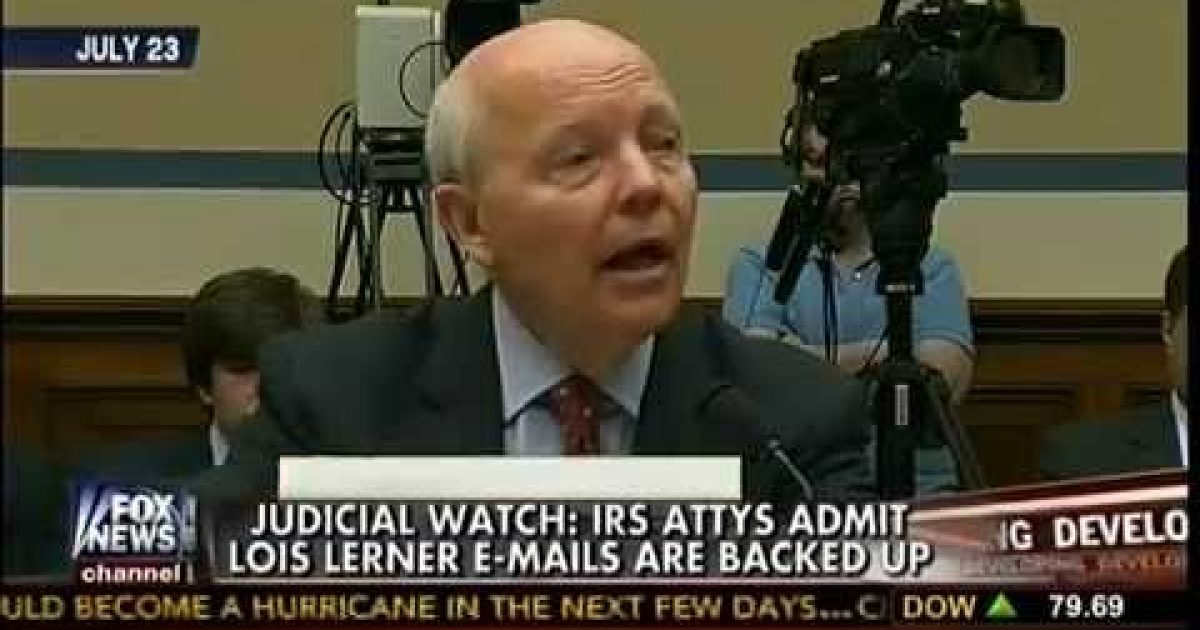 There is a big difference between can’t and it’s too hard, and the IRS failed to make that distinction. Speaking to Shannon Bream on Fox News this afternoon. Judicial Watch boss tom Fittton revealed that a Justice Department official admitted that former IRS official Lois Lerner’s apparently missing emails actually exist on a backup server, but the government doesn’t plan to retrieve them.

A Department of Justice attorney told a Judicial Watch attorney on Friday that it turns out the federal government backs up all computer records in case something terrible happens in Washington and there’s a catastrophe, so the government can continue operating,”

So why won’t they get the emails from the back up? “It would be too hard to go get lois lerner’s emails from that backup system,” Fitton said, paraphrasing the DOJ official.

Too hard?  Can somebody tell me why these people have jobs?  What if in the middle of an IRS audit you were asked to find some record to back up your deductions and you told the agent, “its to hard.” That would be worth a few years in the pokey.

So, everything we’ve been hearing about scratched hard drives, about missing emails of Lois Lerner, other IRS officials, other officials in the Obama administration, it’s all been a pack of malarkey. They could get these records, but they don’t want to.

Fitton said Judicial Watch will ask a federal judge to order the IRS to hand over the emails, which conservative opponents of Lerner want to see in order to determine if there is a link between President Obama’s team and the IRS’s targeting of Tea Party groups.

“If this backup system is working, Lois Lerner’s emails are there,” Fitton said.

Department of Justice attorneys for the Internal Revenue Service told Judicial Watch on Friday that Lois Lerner’s emails, indeed all government computer records, are backed up by the federal government in case of a government-wide catastrophe. The Obama administration attorneys said that this back-up system would be too onerous to search. The DOJ attorneys also acknowledged that the Treasury Inspector General for Tax Administration (TIGTA) is investigating this back-up system.

We obviously disagree that disclosing the emails as required would be onerous, and plan to raise this new development with Judge Sullivan.

This is a jaw-dropping revelation. The Obama administration had been lying to the American people about Lois Lerner’s missing emails. There are no “missing” Lois Lerner emails – nor missing emails of any of the other top IRS or other government officials whose emails seem to be disappearing at increasingly alarming rate. All the focus on missing hard drives has been a diversion. The Obama administration has known all along where the email records could be – but dishonestly withheld this information. You can bet we are going to ask the court for immediate assistance in cutting through this massive obstruction of justice.

Here is the second set of sworn declarations by IRS officials in response to Judge Emmet G. Sullivan’s investigation into the missing emails of Lois Lerner and other IRS officials. The declarations were provided after close of business on Friday, August 22.

The first meeting was held this afternoon by Magistrate Judge John M. Facciola, who was appointed by Judge Emmet G. Sullivan to manage and assist in discussions between Judicial Watch and the IRS about how to obtain any missing records which have been the subject of longstanding Judicial Watch Freedom of Information Act (FOIA) requests and lawsuit (Judicial Watch v. IRS (No. 1:13-cv-1559)).

Judge Sullivan has encouraged Judicial Watch to submit a request for limited discovery into the missing IRS records after September 10.

VIDEO: Sen. Ted Cruz Completely Unloads On AG Merrick Garland, Takes Him To The Woodshed On Why He Dodged Critical Question
Ken Blackwell

ALERT: Thanks To Biden ISIS Terrorists Will Be Ready To ATTACK America In 6 Months Or Less According To THIS Accurate Source
AFF