What Is The Insurrection Act And Can Trump Invoke It To Quell Riots? 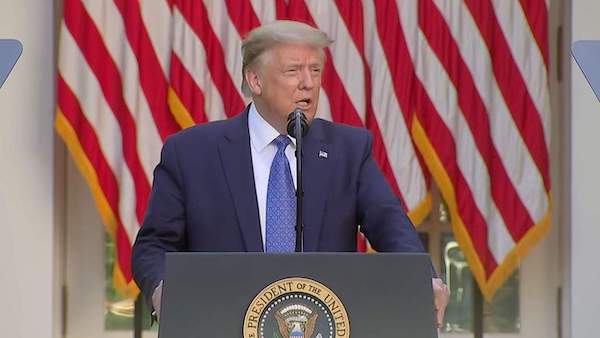 During his Monday night address from the White House Rose Garden, President Trump urged the use of overwhelming force, including the possible use of the military to quell the riots and looting in major U.S. Cities: the Insurrection Act

Today, I have strongly recommended to every governor to deploy the National Guard in sufficient numbers that we dominate the streets.  Mayors and governors must establish an overwhelming law enforcement presence until the violence has been quelled.

If a city or a state refuses to take the actions that are necessary to defend the life and property of their residents, then I will deploy the United States military and quickly solve the problem for them.,

If President Trump invokes the Insurrection Act to use the military to quell the riots in major cities across the country, it will be legal just as it was legal when used to quell riots by JFK, LBJ and Bush #41.

A crucial part of the Insurrection act says:

Whenever the President considers that unlawful obstructions, combinations, or assemblages, or rebellion against the authority of the United States, make it impracticable to enforce the laws of the United States in any State by the ordinary course of judicial proceedings, he may call into Federal service such of the militia of any State, and use such of the armed forces, as he considers necessary to enforce those laws or to suppress the rebellion.

The President, by using the militia or the armed forces, or both, or by any other means, shall take such measures as he considers necessary to suppress, in a State, any insurrection, domestic violence, unlawful combination, or conspiracy, if it—(1)so hinders the execution of the laws of that State, and of the United States within the State, that any part or class of its people is deprived of a right, privilege, immunity, or protection named in the Constitution and secured by law, and the constituted authorities of that State are unable, fail, or refuse to protect that right, privilege, or immunity, or to give that protection; or (2)opposes or obstructs the execution of the laws of the United States or impedes the course of justice under those laws.

After the Insurrection act was passed, President Jefferson used it to enforce the Embargo Act of 1808, which banned the export of any goods, whether by land or by sea.

Lincoln used the act as a justification for using troops during the Civil War. Some of the more modern uses include Eisenhower and JFK’s use of the national guard to enforce Brown v. Board of Education and desegregate schools, LBJ’s use of the act to quell riots in Detriot, Washington D.C., Baltimore and Chicago, along with Bush #41′s use to send troops to the Virgin Islands to stop the looting that followed Hurricane Hugo.and to quell the  L.A. riots after the acquittal of cops in the Rodney King beating.

If the riots continue, and the Insurrection Act is invoked, President Trump’s use of the military will be both legal and with precedent.