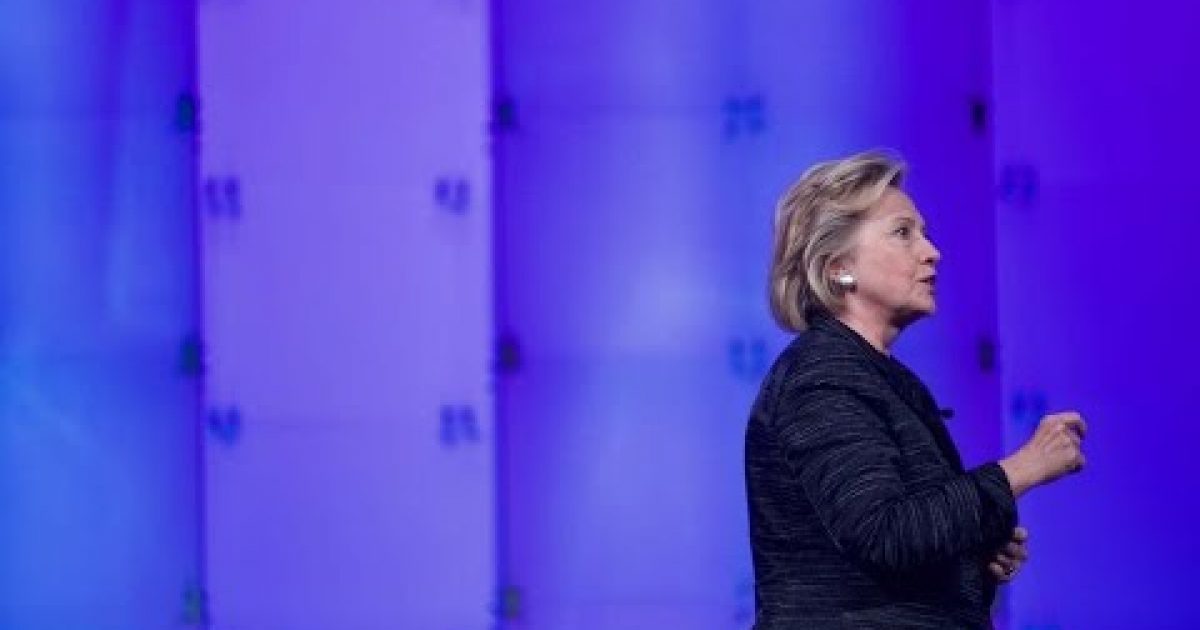 Hillary Clinton defended her use of a private email server for State Department correspondence on Tuesday, saying she used a system set up for her husband because it was convenient and “proved to be effective and secure,” that was her first lie.  Addressing concerns about her emails publicly for the first time on Tuesday, Clinton told a packed room of reporters at the United Nations that she regrets conducting State Department business from a personal email account, but she welcomes the imminent disclosure of the emails she wants to release.

Actually she lied through her teeth but that is the Clinton way.  Going through the text of her press conference about her emails again, I found ten statements which I believe are false. Since research only turned proof for only eight of them, the below only contains the first eight of her lies (Heck I don’t want to be accused of being a Clinton).

1) She didn’t want two devices: First, she claimed that she used private email and a private server for “convenience.” She just didn’t want to use two devices, which is an odd thing to say for someone who just weeks ago said she used two devices—both an iPhone and a Blackberry, in addition to an iPad and a mini iPad. On top of that, I cannot believe that one of her aids didn’t tell her you can have more than one email on your phone (I have four-my daughter had to show me how but it took almost 3 minutes).

2)There are email conversations with her husband on the server:  She said that the server was needed for her husband’s email. But President Clinton’s aides told the Wall Street Journal he hasn’t emailed since leaving office. The server was also set up just as she was starting her job as Secretary of State. Curious timing.

3) Her Email account  followed all the rules She violated a 2005 rule. In 2005, according to the Washington Post, the State Department updated “the Foreign Affairs manual to state that ‘sensitive but unclassified’ information should not be transmitted through personal e-mail accounts.” She violated a 2009 rule. In 2009, federal regulations were updated requiring employees using non-government email to “ensure that Federal records sent or received on such systems are preserved in the appropriate agency recordkeeping system.”She violated a 2011 rule. In 2011, a State Department cable bearing her signature warned employees to “avoid conducting official Department business from your personal e-mail accounts.”
And she violated her own employee rules that she made all other State Department personnel comply with. Even MSNBC fact checked this assertion, with liberal host Lawrence O’Donnell saying Clinton’s secret email server “was not in compliance with” State Department regulations.

4) Everyone did it. If everyone jumped of the Empire State Building…Secretary Colin Powell preceded the rules in question. Secretary Condoleezza Rice used a .gov email. Secretary John Kerry uses a .gov email. Although email practices varied among her predecessors, Clinton is the only secretary of state known to have conducted all official unclassified government business on a private email address. Years earlier, when emailing was not yet the wide spread practice it is now among high officials, Colin Powell used both a government and a private account. It’s a striking departure from the norm for top officials to rely exclusively on private email for official business.

5)  “And there were no security breaches.” Actually she could never know if her email was hacked or not.  According to Wired magazine, ” A nice thought, but one that Clinton didn’t back up today. The internet protocols we use to zap email about the globe were largely written during the early freewheeling days of the net, and they’re still vulnerable to a wide range of attacks. Emails can be spoofed; they can be read in transit; and servers can be hacked. “Email is one of the least secure services you can run,” says Jonathan Zdziarski, a forensic scientist with via Forensics. “[Clinton’s] people might be very good, but no one who really is at the top of their game is going to try to make the claim that they can catch 100 percent of the attacks.”

And Clinton’s job as Secretary of State would have made her “a target of some the most well-funded adversaries,” says Dan Guido, the CEO of security consultancy Trail of Bits. In the years since Clinton was sworn in as Secretary of State, we’ve learnt that those attackers are capable of some very sneaky and technologically accomplished attacks. Knocking over a home-brew email server doesn’t seem so far-fetched, given the break-ins we’ve seen at RSA, Sony, and the US government itself.

6) “And there were no security breaches.” Part 2 Ever hear of Gruccifer? Gruccifer did not attack Hillary’s computer (we think) he was caught hacking into Sidney Blumenthal’s email. According to the Smoking Gun, when “Guccifer” (who was later identified as Marcel Lazar Lehel) breached Blumenthal’s account, he discovered an assortment of correspondence sent to Hillary Clinton at the e-mail address hdr22@clintonemail.com. The “clintonemail.com” domain was registered in 2009, shortly after her nomination to become Secretary of State.

While Blumenthal, a longtime Hillary Clinton confidant, used her private e-mail to send personal messages (like a get well note after she fell at home and suffered a concussion in December 2012), he also forwarded the Cabinet member a series of “Confidential” memos about foreign policy matters.

The memos to Clinton carried titles like “Comprehensive Intel Report on Libya,” and included all-cap warnings that, “THE FOLLOWING INFORMATION COMES FROM EXTREMELY SENSITIVE SOURCES AND SHOULD BE HANDLED WITH CARE.”

If  Gruccifer could do it, the Russians, Chinese, and North Koreans could have done it also.

7) 90% or 50%? Hillary Clinton changed the percentage of emails sent from a private account that she claims were associated with her work at the State Department, from 90 percent down to 50 percent.  Clinton told reporters during a presser at the United Nations Tuesday that half of her 60,000 emails were work-related, while the other half were personal.  Those personal messages “were not in any way related to my work,” she said. “I had no reason to save them, but that was my decision because federal guidelines are clear and the State Department request was clear.”  A Clinton spokesman told ABC News last Thursday, however, that she turned over around 90 percent of the emails she wrote as secretary of state, and only withheld personal emails not covered by State Department policy. This kind of reminds me of the the great sage, Yogi Berra who once said of baseball, “Baseball is ninety percent mental and the other half is physical.”

8)Reporter: What about Ambassador Scott Gration being forced to resign for using personal emails? Hillary: David, I think you should go online and read the entire I.G. report. That is not an accurate representation of what happened. Ambassador Gration was pushed out for a lot of reasons, but one huge one was refusing to use government email (he would lock himself in the bathroom to use his personal email account for business. Indeed the bottom of page 43 of the Inspector General’s critical report begins:

Very soon after the Ambassador’s arrival in May 2011, he broadcast his lack of confidence in the information management staff. Because the information management office could not change the Department’s policy for handling Sensitive But Unclassified material, he assumed charge of the mission’s information management operations. He ordered a commercial Internet connection installed in his embassy office bathroom so he could work there on a laptop not connected to the Department email system. He drafted and distributed a mission policy authorizing himself and other mission personnel to use commercial email for daily communication of official government business. During the inspection, the Ambassador continued to use commercial email for official government business. The Department email system provides automatic security, record-keeping, and backup functions as required. The Ambassador’s requirements for use of commercial email in the office and his flouting of direct instructions to adhere to Department policy have placed the information management staff in a conundrum: balancing the desire to be responsive to their mission leader and the need to adhere to Department regulations and government information security standards.

Even more than her lying husband, Hillary Clinton has used lying as a political tool throughout her career, the Email press conference is simply the latest example.  And before she asks, yes Hillary it makes a huge difference.