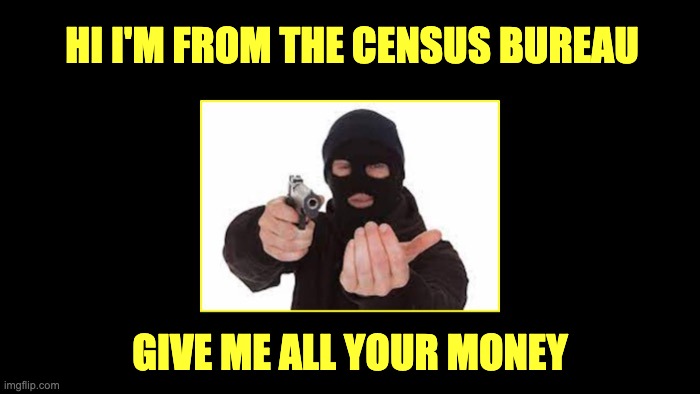 Gee, one would think they were hiring some of the worst people who crossed the border from Mexico, but they are from the US. According to Judicial Watch, “More than a decade after the problem was exposed, workers for the 2020 count were not properly vetted. Many with criminal records had direct interactions with the public.” In other words, the government is sending crooks to our homes. And in their most recent report, It’s still happening.

This problem was first revealed in 2009, before the 2010 census, and the most recent report claims it has gotten worse:

The Census Bureau has long failed to screen its workforce and therefore endangers the public. It’s not like there isn’t a vetting system in place. When one of the 248 regional offices recruit a candidate, the Census Investigative Services (CIS) at the agency’s headquarters in Suitland, Maryland is charged with conducting a pre-employment suitability review.

Our taxes are paying for the reviews, but they are not being done well or not being used. Either way, it’s a waste of taxpayer money–-a dangerous one.

After the 2009 internal report, a Congressional investigation was conducted:

Congressional investigators slammed the agency for failing to adequately conduct mandatory background checks for tens of thousands of workers, resulting in the hiring of hundreds of violent criminals. At the time, the probe found that more than 35,000 temporary census workers were employed without the proper criminal background check  which includes fingerprinting. That means that more than one-fifth of the canvassing workforce did not get properly processed or fully screened for employment eligibility, creating an obvious security risk

There is no truth to the rumor that the then-vice president Joe Biden blamed the  Census Bureau issue on Vladimir Putin, Donald Trump, or the Ultra MAGAs. A more recent report released the week of May 9, 2022, Says the Census Bureau hasn’t updated its hiring practices. Unlike the 2009 report, this covers a period that is years before the next census; therefore, the audit has fewer temporary census workers for the report.

Investigators found that at least 6,802 census workers were not properly adjudicated, “resulting in persons with significant issues working for the Bureau and, in some instances, contacting households during the 2020 Census NRFU [Nonresponse Followup] operation.” In cases when CIS adjudicators actually vetted employees, the watchdog found that they often failed to request the necessary documentation to assess the severity of the issues raised.

What makes this report even worse is that worker participation rates are lower (unemployed people who are no longer looking for work). Despite the low unemployment percentages, the worker participation rate was 62,2%. Much of the almost 38% leftovers have retired or left the job market for health reasons. But there is a large segment that has simply given up looking. This means a large block of non-criminals can be convinced to take a job to canvas households. Why isn’t the census bureau trying to recruit them?