The BLUE WAVE Is Now A drip 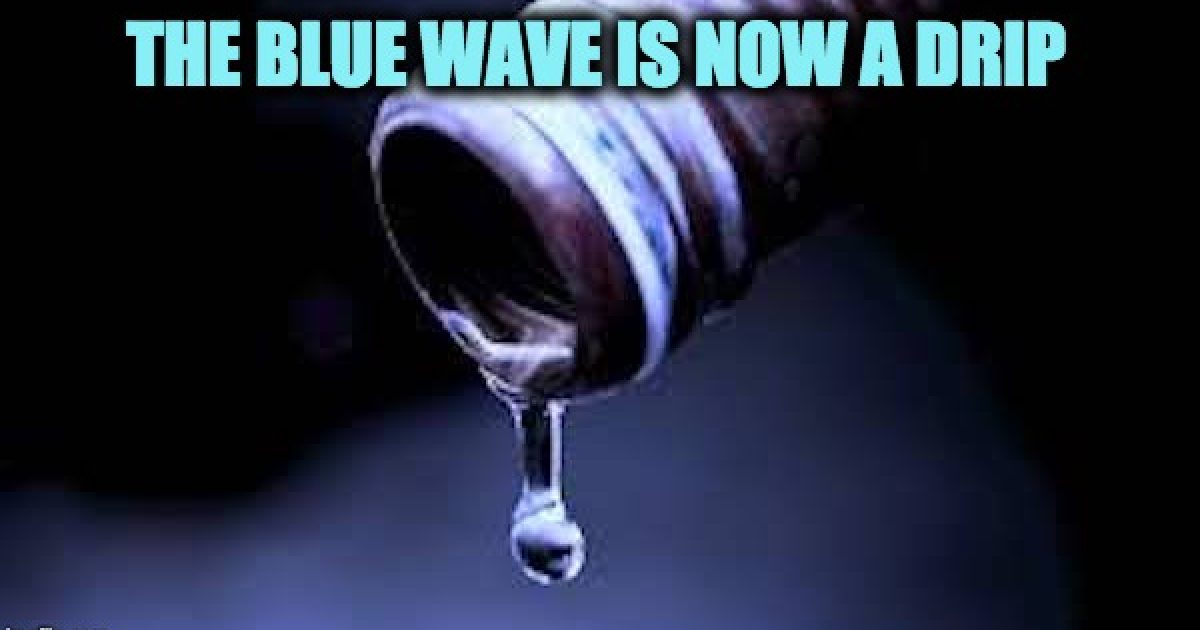 Remember that Democratic Party Blue Wave that Republicans were supposed to be so worried about? It might be time to stop worrying about that and start focusing on just how big the GOP can win in the midterms.

Just a few months ago the disparity between Democrats and Republicans in the polling seemed to suggest two things:

Both of these things added up to a Democrat Blue Wave come November 2018, and this late in the game, there was likely nothing that the GOP could do about it.

Or so the pundits and professional prognosticators thought.

Fast forward to the present, and suddenly things are looking altogether… murky, in the prediction department.

The latest average of the generic Congressional polls has the Democrats leading the GOP by a measly 4 points, down from a high of 13 points back in December of 2017 (just 6 short months ago).

Say good-bye to the D-advantage in the generic ballot. Our latest Reuters/Ipsos poll shows that registered voters as likely to support Republicans as Democrats. @ReutersPolitics https://t.co/0ZIVVs6Zqc pic.twitter.com/rLIHL7jPRl

The Democrats’ advantage in the generic ballot dipped from 16 points in February to six points in March to just three points now. The party’s advantage has waned among enthusiastic voters as Republican enthusiasm has grown (in March, 36% of Republican and Republican-leaning registered voters said they were very enthusiastic about voting; that’s up to 44% in the new poll).

That enthusiasm gap shows about 50% of Democrats “very enthusiastic” to vote, compared to about 44% of Republicans. Even more unsettling for Democrats, this question was asked of “registered voters,” not “likely voters,” which would be more reflective of the likeliest outcome. If the question is asked of “likely voters” the enthusiasm gap shrinks even further, as GOP voters are generally more reliable as consistent voters.

This entire situation has the Democrat Party more than a little bit terrified, naturally, and there are some signs that panic is beginning to set in.

RCP senior election analyst Sean Trende appeared on Fox and Friends Monday morning to explain that the midterms were up for grabs, and at this point, either party could come out on top.

Griff Jenkins: Listen, the president’s approval rating is up. We’ll just put it up quickly so you see it if you haven’t already. 42% approve, that is incredibly up from the 30% that most Democrats refer to in recent weeks. Tell me, why are we seeing this approval? And you have about three things you believe we should be looking at right now.

Sean Trende: There’s a couple of things going on. I think the good economic news is starting to break through. I think people are starting to question where the Mueller investigation is going. I think it had kept the president down for a while. And I think the tax cuts energized the Republican base and are playing a role in the president’s improving fortunes.

Griff Jenkins: Now, traditionally, about 23, 24 seats change hands in these midterm elections. Aside from the environment that we’re in, how do you factor in this environment now?

Sean Trende: Well, I think if you looked six months ago, you would say it was doomsday for the Republicans with the Republican down in the 30s, showing a double-digit lead for Democrats. But that’s just not the world we’re in today. The president is up into the low to mid 40s, and his job approval, the generic ballot has closed to a four-point lead for the Democrats, so I think we’ve gone from Democrats being heavy favorites to take the House to something of a dead heat and maybe a thumb on the scale for the Republicans…

Griff Jenkins: I don’t know if you saw yesterday a headline on ‘The New York Times’ saying that even California Democrats are feeling the heat out there. They’re worried about the prospects of Republicans actually having amazing results there. What do you make of that?

Sean Trende: No, I think it’s a real concern for the Democrats. They have this top two primary system where everyone runs in the same race, and the top two make it to the election. There’s a lot of Democrats running, they could divide the democratic vote, and you could end up with two Republicans in the general election shutting the Democrats out, which is sort of a nightmare scenario for Democrats.

While you might think that all of this is a reason for the GOP to be optimistic in 2018, let’s not get ahead of ourselves. The Democrats still hold the polling advantage, especially in districts that Hillary Clinton won in 2016. The media is again partnering with them in their ever-increasing efforts to undermine the GOP and the Trump presidency, and the left is continuously searching for new ways to demagogue conservative candidates.

While the political news is good for the GOP, now is the time for us to be increasing our efforts at turning out conservative voters and making sure our message of personal and economic freedom is getting out to the average, middle-of-the-road voter. Encourage your fellow conservatives to be more active in their work, and to be reminding their friends and families about the importance of staying involved and voting for suitable candidates. Let’s not allow the Democrats to slow down our string of economic, political, and foreign policy victories… get out there and make sure that Republicans hold on to the House and maybe even grow their lead in the Senate!