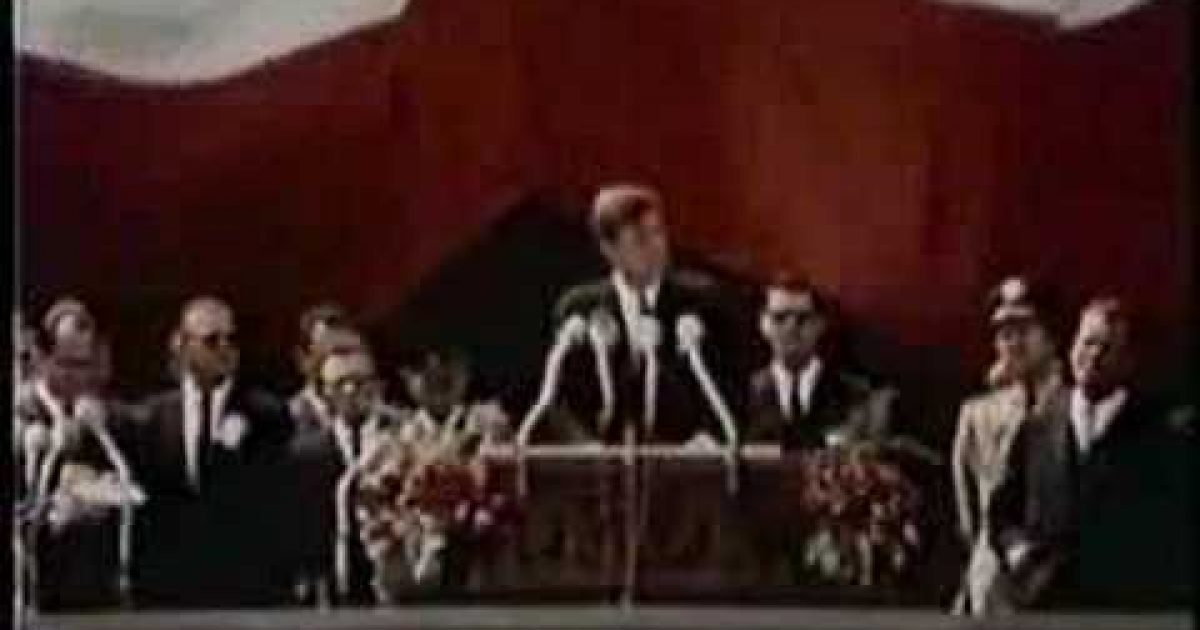 It started 53 year ago, a physical barrier constructed by communist East Germany starting on 13 August 1961 that completely cut off West Berlin from surrounding East Germany and from East Berlin. Its purpose was to blunt the influence of the free Western German people would have on the oppressed people of East Germany, indeed on the entire Soviet block.

The Berlin Wall became the symbol of the Cold War between freedom and tyranny, which was really only mostly cold, a war lead by the United States and won because almost every president from 1961 to the time the wall was destroyed in 1989 ran his foreign policy with a strong sense of morality. That doesn’t mean we never supported dictators and tyrants, it means we chose our friends on the basis of who will help us with our ultimate goal eliminating the real threat of communist dictatorships across the world.

The wall itself went through four major transformations during its 28-year history. The Berlin Wall started out as a barbed-wire fence with concrete posts, but just a few days after the first fence was placed, it was quickly replaced with a sturdier, more permanent structure made out of concrete blocks, topped with barbed wire.

By the time the Berlin Wall fell in 1989, there was a 300-foot No-Man’s-Land, an additional inner wall, soldiers patrolling with dogs, a raked ground that showed footprints, anti-vehicle trenches, electric fences, massive light systems, watchtowers, bunkers, and minefields.

In response to the erection of the Berlin Wall, President Kennedy appointed retired General Lucius D. Clay, who had been the Military Governor of the US Zone of Occupation in Germany. His appointment was an unambiguous sign that Kennedy would not compromise on the status of West Berlin. Clay and Vice President Lyndon B. Johnson arrived at Tempelhof Airport on the afternoon of Saturday, 19 August 1961.

Twenty-two months after the erection of the Berlin Wall, on 26 June 1963, U.S. President John F. Kennedy visited West Berlin. Speaking from a platform erected on the steps of Rathaus Schöneberg for an audience of 450,000 he declared in his “Ich bin ein Berliner” speech the support of the United States for West Germany and the people of West Berlin in particular:

Kennedy’s message was aimed as much at the Soviet Union as it was at West Germans and was a clear statement of U.S. policy in the wake of the construction of the Berlin Wall. The speech is considered one the most notable moment of the Cold War and a great morale boost for West Berliners, who lived in a closed city deep inside East Germany and who feared a possible East German occupation.

The United States did not answer the building of the Berlin Wall with troops, but we did answer it with strength. Every President beginning with Kennedy and ending with President George HW Bush (with the exception of Jimmy Carter) warned the communist block that the strength of the United States would protect freedom across the world.  The Cold War was the ultimate “humanitarian effort.”

Every move by the USSR, or in the name of the USSR was met by a public or private move by the west that demanded the communists “stop it now.” Twice we went to the brink of a nuclear war, during the Cuban missile crisis and the 1973 Yom Kippur War, to push back against aggression. This is not to say we needed to go to war to protect America, but we needed to show our strength to protect freedom.

After four years of Jimmy Carter, when the US policy went from strength to appeasement, President Ronald Reagan, along with Pope John Paul II, and British Prime Minister Margaret Thatcher set the policy that would bring down the Berlin Wall, along with it the Soviet Block. They did it with a combination of a message of freedom and morality, combined with a show of strength. The United States began a military build up which basically forced the Soviet Union into economic collapse, while the three leaders of the West; Reagan, Thatcher and the Pope, preached freedom and peace.

In June of 1987 another US President made a famous speech in front of the Berlin Wall. President Ronald Reagan stood in front of Berlin’s Brandenburg Gate and told Soviet President Mikhail Gorbachev to “tear down this wall.”


Less than two years later, the Solidarity Union in Poland began to bring down that country’s communist government with a little help from the U.S. who helped fund the union and who warned the Soviet Union not to intercede, and from the Catholic Church who gave the very observant Polish Catholic community the moral authority to continue.

The movement to end Soviet-style authoritarianism in Poland spread across the Eastern Europe wherever the communists governed.

On the 9th of November 1989, ten months after Reagan left office the wall started coming down. It wasn’t however Mr. Gorbachev tearing down the wall. It was the people of the divided city, East and West Berlin who tore down the wall.

Protest demonstrations broke out all over East Germany in September 1989. Initially, protesters were mostly people wanting to leave to the West, chanting “Wir wollen raus!” (“We want out!”). Then protestors began to chant “Wir bleiben hier”, (“We’re staying here!”). This was the start of what East Germans generally call the “Peaceful Revolution” of late 1989. The protest demonstrations grew considerably by early November. The movement neared its height on November 4th, when half a million people gathered at the Alexanderplatz demonstration, a rally for change in East Berlin’s large public square and transportation hub.

A wave of refugees leaving East Germany for the West began, going through Hungary via Czechoslovakia. It was tolerated by the East German government and in agreement with the communist Czechoslovak government. On November 9th as the protests continued, the East German Politburo voted to allow people to move directly through crossing points between East Germany and West Germany, including West Berlin.

Germans celebrated their reunion by dancing on, and tearing down the wall erected on August 13, 1961.

In the end it was the sense of morality by the United States that drove the anti-communist “humanitarian effort,” of the Cold War.  It drove the American weapons buildup, it drove the setting of red-lines which were enforced by our presidents, it drove a Catholic Pope from Poland a US President and British Prime Minister to empower the people of Eastern Europe, knowing that those world leaders had their backs,  to throw of the yoke of communism and to embrace freedom.

Today it is not communism threatening freedom across the world it is radical Islamism.  A movement that combines religion and politics and corrupts them both. Groups like Hamas and ISIS have a goal of establishing a world-wide caliphate just like the USSR had a dream of establishing their despotic system throughout the world.

Unlike the world leaders of the late 1980s,  President Obama has kept his head deeply in the sand. He has abdicated his moral responsibility as leader of the free world to fight for freedom. His goal is not to eradicate what threatens the west, but to avoid sending US troops overseas.  A noble goal but one that will end up creating more war, with more troops necessary overseas and here in the US, protecting a seemingly weak United States from a terrorist threat and from the threat of a Russian who wishes to recreate the “glory days” of the USSR.
This President and indeed much of the nation has forgotten what the Berlin Wall taught us; only through a show of  weapons strength, strong leaders who operate with a strong moral compass,  a strong sense of right and wrong will America and the rest of the world avoid troops on the ground.
Facebook Twitter Flipboard