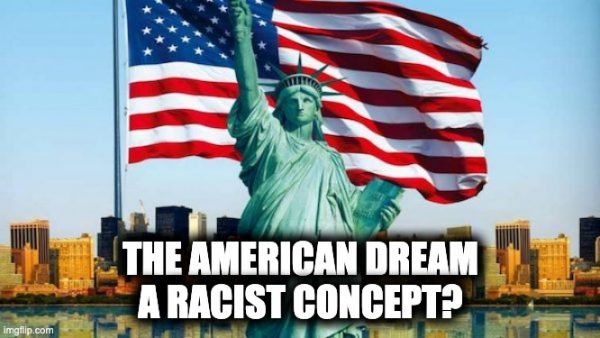 So when growing up when my Dad told me to work hard and keep my nose to the grindstone, and I will be okay, he was racist? Did say that because he thought I was African American? WELL… we Jews were slaves in Egypt, and Egypt IS in Africa. But that was a very long time ago. I am not like Sean King, self-identifying myself as black with two Caucasian parents.

“Model minority myth obscures the realities of racism…Model minority mythology reinforces other damaging ideologies that are predominant in our society, such as the American Dream, that success is attainable through effort and following the rules regardless of one’s identity or experiences,” the professor said.

“However,” Rabelo added, “we know that our society is not actually a meritocracy. White supremacy and inequality are cemented into the foundations of all our major institutions of policy.”

So is she saying the way to get ahead is to sit on my backside and do nothing?

Rabelo criticized the idea that all people can attain success “through effort and following the rules, regardless of one’s identities or experiences.”

Rabelo defined the “model minority mythology” as “a set of stereotypes and structures that casts typically Asian Americans but other groups as well as ‘ideal’ members of organizations in society based on their perceived work ethic, educational attainment and success.”

“And so the model minority myth is rooted in anti-blackness,” she said.

But I have never read a definition of the American Dream that focused on Asian Americans.

What Rabelo is referring to is an argument against the idea that America is systemically racist. Pundits will often point to the success of Asian Americans, who have the highest household income in the country. If a minority community is able to do so well, this line of thought asserts, success in America relies more on individual decisions than on race.

However, Rabelo claimed that this idea is “rooted in anti-blackness because it seeks to differentiate ‘model minorities’ from bad or undesirable minorities.”

Wow, that’s interesting—not because of what she is saying because that is liberal crapola.  But it is interesting because it makes me wonder what kind of drugs are they selling at San Francisco State University.