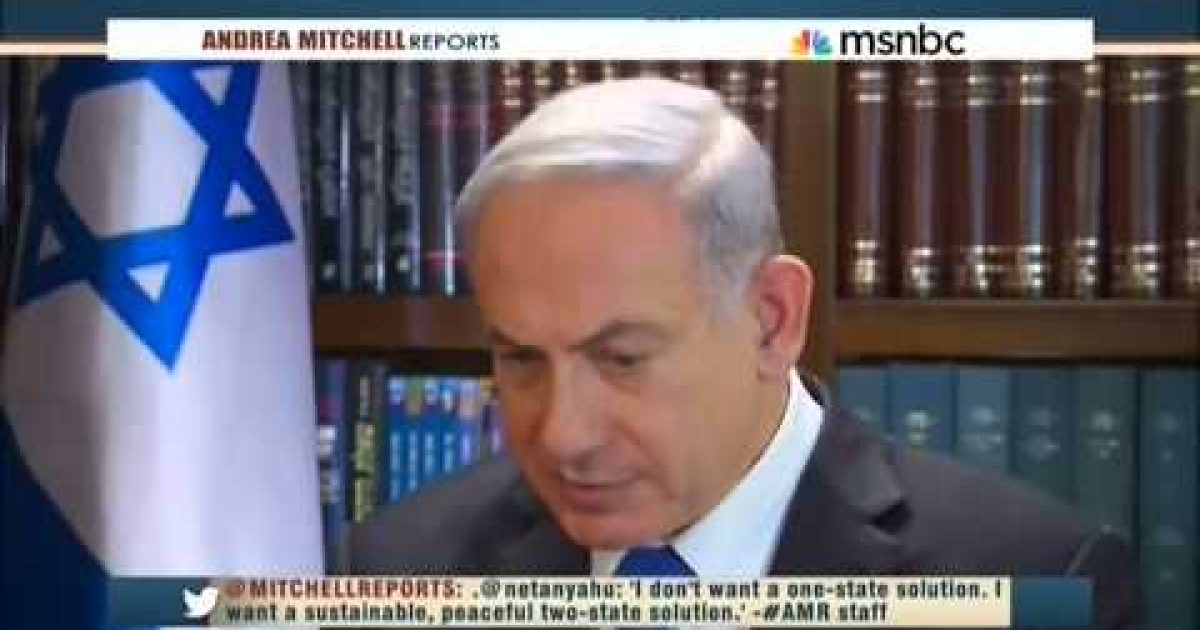 Regular readers of these pages may remember a post from yesterday where it was explained, “It is very convenient for the media to take half a statement and spin it
the way they want, but Bibi never said he didn’t believe in a two-state
solution, nor did he ever say he would block a two-state, what he said
was a Palestinian state would never be formed while he was premier
because it would become a base for radical Islam.”

After spending much of the past five days whining about Bibi’s hard turn right, Andrea Mitchell finally asked Netanyahu about what she thought he said.

Mitchell: Congratulations on your victory. But — there’s always a but, critics and analysts here and around the world are saying at what cost? Your hard turn right on the Palestinian issue, which you said about the Arab voters coming out in droves they say are costing you, costing you support around the world.

Netanyahu: Well, neither one is — the premises in your questions is wrong. I never changed my policy. I never retracted my speech at Bar Ilan University six years ago, calling for a demilitarized Palestinian State that recognizes the Jewish State. What has changed is the reality. Abu Mazen the Palestinian leader refuses to recognize the Jewish State and made a pact with Hamas, that calls for destruction of Jewish State, and every territory that is vacated today in the Middle East is taken up by Islamist forces. We want that to change so we can realize a vision of real sustained real peace. I don’t want a one state solution. I want a sustainable, peaceful two-state solution, but for that circumstances have to change.

Acting as if she didn’t hear or didn’t care what Netanyahu had just said  Mitchell asked:

Mitchell: But you were reelected on a mandate; certainly Israeli voters your supporters believe you were re-elected on a mandate against a two-state solution. That is the way the White House is interpreting–says the White House says this is divisive, so divisive that now the administration is saying they will not stop the U.N. from conferring statehood. They will not block or strongly considering not blocking a vote for statehood for Palestinians.

Netanyahu: First of all, that state would become a terrorist state. Iran says they will arm the West Bank the way they arm Gaza. We withdrew from Gaza, we just a few months ago, not ancient history but we just a few months got thousands of rockets Andrea on our heads. We don’t want it to happen again. I think the administration has said time and time again the only way to achieve peace is a negotiated solution, you can’t impose peace. In any case If you want to get peace, you’ve got to get the Palestinian leadership to abandon their pact with Hamas and engage in genuine negotiations with Israel for an achievable peace. We also have to make sure we don’t have ISIS coming into that territory; it’s only two-dozen miles from our borders, thousands of miles away from yours. So we need the recognition of Jewish state and real security in order to have a realistic two-state solution. I was talking about what is achievable and what is not achievable. To make it achievable, then you have to have real negotiations with people committed to peace. We are — it’s time we saw the pressure on the Palestinians to show that they are committed too.

It was very convenient for Mitchell, the rest of the mainstream media and the White House to take half of Netanyahu’s statement and spin it the way they want, but the truth is that Bibi never said he didn’t believe in a two-state solution, nor did he ever say he would block a two-state solution; what he said was a Palestinian state would never be formed while he was premier because it would become a base for radical Islam.  (You can read what Bibi actually said by clicking here).

Attorney Alludes that Smollett ‘Attackers’ are Homophobic
The Black Sphere

Conspiracy U: A Case Study | Schaftlein Report
Flag And Cross

The History of Wuflu and its Variants
The Black Sphere