But They Aren’t Going To Get The Last Laugh, It Seems. 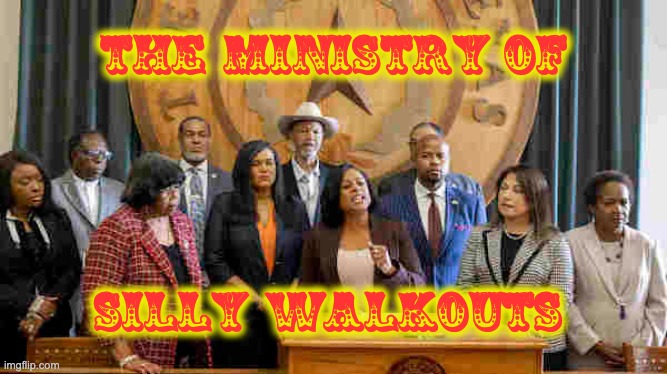 Around the nation, the MAGA wing of the Republican Party has been working diligently to tighten electoral security. Even in Texas, where Trump won in 2020, the state is trying to ensure that the possibility of voter fraud is eliminated. But instead of voting on a new bill, Texqw Democrats decided to create their own version of Monty Python’s Ministry of Silly Walks.

Of course, seeing as this push is emanating from the right side of the aisle, Democratic lawmakers have already begun to rail against it in states like Georgia and Florida, where Republican legislators have already made headway.

Now, in Texas, the left is pulling a rather childish stunt to postpone the inevitable.

As the clock got closer to the midnight deadline, Democratic lawmakers in Texas decided it was time for dramatic action to block passage of a massive overhaul of the state’s election laws. The measure had seemed all but certain to pass, but with a little more than an hour to go before the deadline Democrats staged a walkout, depriving their Republican colleagues of the 100-member quorum needed to pass the measure. It amounted to one of the biggest protests to date by Democrats against the efforts by Republicans across the country to restrict voting rights. And it was historic too. It marked only the fourth time in the history of Texas that lawmakers decided to break quorum to protest a bill. The last time the strategy was used was in 2003, when 50 Democrats fled to Oklahoma to protest redistricting.

It doesn’t appear as though the Democrats will succeed, however.

The Democrats’ victory is likely to be short-lived. Although the midnight deadline meant anything not passed by then would be dead for the year, Gov. Greg Abbott made clear he would bring up the measure again in a special session. “Election Integrity & Bail Reform were emergency items for this legislative session. They STILL must pass,” Abbott tweeted. “They will be added to the special session agenda.” Abbott didn’t specify when the special session would start, but it could be as early as Tuesday.