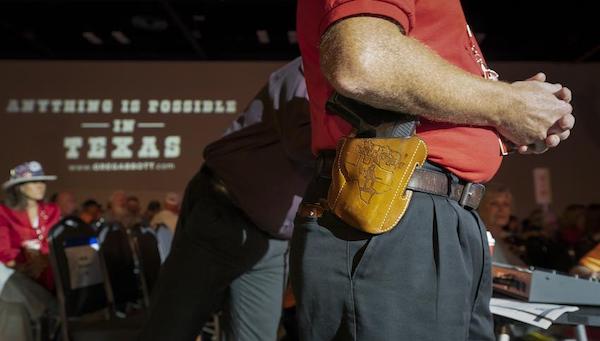 In Texas, when the permitless carry law took effect, several news outlets pushed the fear factor, reporting concerns of law enforcement, gun control activists, and even firearms instructors or gun dealers who raised some alarms about how allowing people to carry without a permit or any formal training could prove to be dangerous to law enforcement and the public.  Texas Constitutional carry

But are these concerns justified?

Texas became the 20th state to adopt what is generically called “constitutional carry,” which translates to carrying firearms without a license or permit.

Some media outlets in Texas seemed to strangely try to connect permitless carry to the mass shootings in El Paso and Midland, which is a stretch unless the reports suggest that allowing permitless carry is a response to those tragedies.

More to the point, a look at the FBI Uniform Crime Reports over the past few years just might suggest there is really no change in the danger factor, and if there have been changes in individual state statistics, it might be negligible.

In Iowa, which went permitless in 2015, the FBI report for 2017 lists 100 homicides, including 57 involving guns. In 2019, the FBI says there were 58 slayings reported, including 36 involving firearms.

Maine is another state that is permitless and has been since 2015. In 2017, the state reported 23 slayings, of which 12 involved guns. In 2019, according to the FBI report for that year, there were 20 murders, including 13 committed with firearms.

One can go down the list of the 20 states now allowing “constitutional carry,” and the pattern doesn’t seem to vary much.

So, why all the paranoia over permitless carry? Maybe it’s because anti-gunners and the bureaucrats and elected officials they support are concerned about losing just a bit more control over gun owners. If murders begin to skyrocket in constitutional carry states, there will be stories on the front pages of every major newspaper in those states, above the fold. It will be the lead item at the 5 o’clock news broadcast, dramatically reported by news anchors with an agenda.

Austonia.com noted a few things that opponents of the new law really haven’t been explaining.

On that last point, felons have been obtaining guns for decades without being tracked, so what’s the difference, rights activists challenge? Felons haven’t bothered with carry permits, background checks, or any registration or training requirements in any state, so what is happening in Texas is irrelevant.

Give the Lone Star State five years, keeping an eye on the annual FBI Crime Reports, to see whether permitless carry is a disaster or is really inconsequential. Meanwhile, say constitutional carry advocates, carry with confidence, don’t be a show-off or an attention grabber, and stay safe.