Ted Cruz ‘The Overwhelming Majority of Violent Criminals are Democrats’ 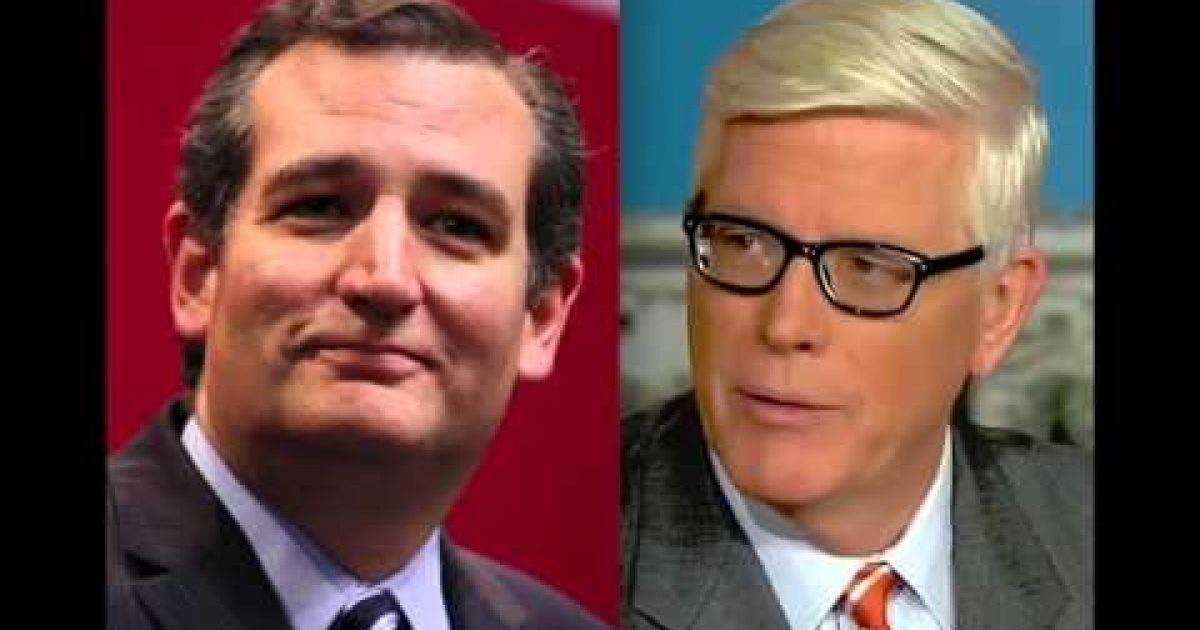 A guest on Monday evening’s Hugh Hewitt radio show, GOP presidential hopeful Senator Ted Cruz (R-Tx) threw down his gauntlet at the feet of the mainstream media.  He attacked the media Monday for “hoping desperately” that the Planned Parenthood shooting was carried out by a Republican, when in reality “the overwhelming majority of violent criminals are Democrats.”

Cruz said that last week’s tragedy in Colorado “has really displayed the ugly underbelly of the media.” Adding, “You know, every time you have some sort of violent crime or mass killing, you can almost see the media salivating, hoping, hoping, desperately that the murderer happens to be a Republican so they can use it to try to paint their political enemies.”

“Here’s the simple and undeniable fact, Cruz said, “The overwhelming majority of violent criminals are Democrats. The media doesn’t report that. What they report, and there’s a reason why the Democrats for years have been viewed as soft on crime because they go in and they appoint to the bench judges who release violent criminals, they go in and they do what Barack Obama tried to do, which is appoint a lawyer who voluntarily represented for free, a cop killer to a senior Justice Department position.”

The Senator opined that the Democrats want convicted felons to be able to vote is because they know most of them will support Democrats.

“There’s a reason why the Democrats for years have been viewed as soft on crime, the Democrats know convicted felons tend to vote Democrat. Every time there is a terrible crime, they are so excited, come on, please, one of these be a Republican so that we can try to paint the other side, it is one of the more egregious examples of media bias and it is something that we see over and over and over again.”

Below is the transcript for that segment as well as the audio of the exchange:

Hewitt: Now let’s go to the very, very serious stuff. Jennifer Markovsky, Ke’Arre Stewart and Garrett Swasey, the last, a police officer, lost their lives in Colorado when that gunman killed them last week. On the CBS News write-up yesterday, though, of this, there is this paragraph. “On Sunday, Planned Parenthood said Dear’s,” that’s the killer’s, “words, matched the ‘hateful rhetoric’ GOP presidential candidates and many conservative leaders have been using since now-discredited, secretly-taped videos discussing the procurement of fetal body parts for medical research came out.” Now first of all, that’s CBS editorializing. And I don’t think these videos have been discredited in the least, do you, Senator?

Cruz: Look, of course they haven’t, and that’s CBS behaving like the mainstream media always does, as liberal partisans. And indeed, it’s one of the most striking things that none of the major network news have been willing to even show the Planned Parenthood videos, which demonstrate senior Planned Parenthood officials being caught on tape apparently committing a pattern of ongoing felonies. But none of this is surprising. The media, just like Barack Obama and Hillary Clinton, are trying to politicize this tragic shooting. This man was a deranged, homicidal killer, and you and I are both un-apologetically prolife, and that means defending every human life, including the unborn, but also including the police officer and the civilians who lost their lives. And this murder was fundamentally wrong. And the efforts of the media to transform it into their pro-abortion propaganda is as transparent as it is despicable.

Cruz: They were certainly caught on film, that there is no doubt that they were selling baby parts. That is unambiguous. The videos show senior Planned Parenthood officials selling the parts of unborn children, and it is a federal criminal offense. It’s a felony to sell the body parts of unborn children for profit. The only legal defense Planned Parenthood could try to mount is that it wasn’t being sold for profit. Even that, on the face of it, is a difficult case to make, because one of the videos shows a Planned Parenthood official negotiating back and forth, and saying she didn’t want to undercut herself, she wanted to get the highest price she possibly could, which on its face sure sounds like it is selling them for profit. But you know, that answer, frankly, should not be resolved by you and me on a radio show. That answer should be resolved by a grand jury, and by the Department of Justice presenting the evidence to the grand jury to determine whether Planned Parenthood committed a pattern of felonies. And it is only because the Obama Justice Department is the most politicized and partisan Justice Department we’ve ever seen that nobody on Earth thinks there’s any chance they would ever investigate, much less prosecute, Planned Parenthood. I can tell you this, Hugh, if I’m elected president, on the first day in office, I will instruct the U.S. Department of Justice to open an investigation into Planned Parenthood, and to prosecute any and all criminal violations by that organization, because criminal justice should be blind to party or ideology. Instead, it should be driven by the facts and the law, and that doesn’t happen in the Obama Justice Department.

Hewitt: Senator Cruz, I begin with this, because there’s obviously a concerted effort, it’s an Orwellian effort, to delegitimize criticism of Planned Parenthood. And I brought up on Meet The Press yesterday the name Floyd Lee Corkins. That’s the man who went down to the Family Research Council with the intention of murdering many people because of the opposition of the Council to same sex marriage.

Hewitt: He’s been convicted to 25 years to life. He was a terrorist like this guy was a terrorist at the Planned Parenthood thing. But there was no attempt by conservatives to demonize advocates of same sex marriage. The reverse is not true right now, and I am worried about the 1st Amendment. In fact, if I can play for you Governor Hickenlooper in Colorado yesterday, governor of Colorado, I’m at Colorado Christian University today…

Hewitt: He was on State of the Union. Here’s what the governor of Colorado said.

John Hickenlooper on tape: Well, certainly it is a form of terrorism, and maybe in some way, it’s a function of the inflammatory rhetoric that we see on all, I mean, so many issues now, there are bloggers and you know, talk shows where they really focus on trying to get people to that point of boiling over, and just intense anger. And I think maybe it’s time to also look at how do we tone down some of that rhetoric. Obviously, no one’s going to try and reduce free speech in this country, but that rhetoric clearly is, if people are in some way emotionally unstable or psychologically unbalanced, that intensity of rhetoric sometimes seems to pull a trigger in their brain that they lose contact with what reality is.

Hewitt: Now if Governor Hickenlooper made the same statement after Corkins tried to kill the Family Research Council people, I do not remember it. But Senator, that’s clearly an attempt to intimidate speech.

Cruz: Look, of course it is, and it seems to me journalists ought to ask those same Democrats, whether it’s the Governor or whether it’s Barack Obama, or whether it’s Hillary Clinton, whether they believe the inflamed rhetoric of Black Lives Matter has contributed to the targeting and murder of police officers. And one of these seems to be clear. You want to talk about inflamed rhetoric, Black Lives Matter has been caught, their protesters on film, chanting pigs in a blanket, fry ‘em like bacon. Now that is hateful rhetoric, and I don’t see any reporters asking Hillary Clinton when she meets with Black Lives Matter whether she agrees with those sentiments that we should be murdering police officers. And I would contrast that with what you and I were talking about just a minute ago on Planned Parenthood. Neither of us expressed any sentiments remotely like that. We said the federal criminal laws in this country should be enforced against anybody who violates them, and there shouldn’t be a partisan exemption for friends of the Democratic Party like Planned Parenthood. That’s not overheated rhetoric. That is in fact simply following the law and respecting the rule of law.

Hewitt: And before I switch to the 2016 race, I have been doing prolife events for 25 years. I’ve probably done more than 100 of them. I have never met, not once, a single prolife activist who is in favor of violence of any sort. Have you, Senator Cruz?

Cruz: I have not, and I would note that this whole episode has really displayed the ugly underbelly of the media. You know, every time you have some sort of violent crime or mass killing, you can almost see the media salivating, hoping, hoping desperately that the murderer happens to be a Republican so they can use it to try to paint their political enemies. Now listen, here’s the simple and undeniable fact. The overwhelming majority of violent criminals are Democrats. The media doesn’t report that. What they report, and there’s a reason why the Democrats for years have been viewed as soft on crime, because they go in and they appoint to the bench judges who release violent criminals. They go in, and they do what Barack Obama tried to do, which is appoint a lawyer voluntarily represented for free, a cop killer, to a senior Justice Department position. They go in and fight to give the right to vote to convicted felons. Why? Because the Democrats know convicted felons tend to vote Democrat. And so the media never reports on any of that, doesn’t want to admit any of that, but you can see in every one of these, every time there’s a terrible crime, they’re so excited, come on, please, one of these be a Republican so we can try to pain the other side. It is one of the more egregious examples of media bias, and it’s something we see over and over and over again.