Ted Cruz Is Correct, The ‘97% of Scientists Agree With Climate Change’ Study is Bogus 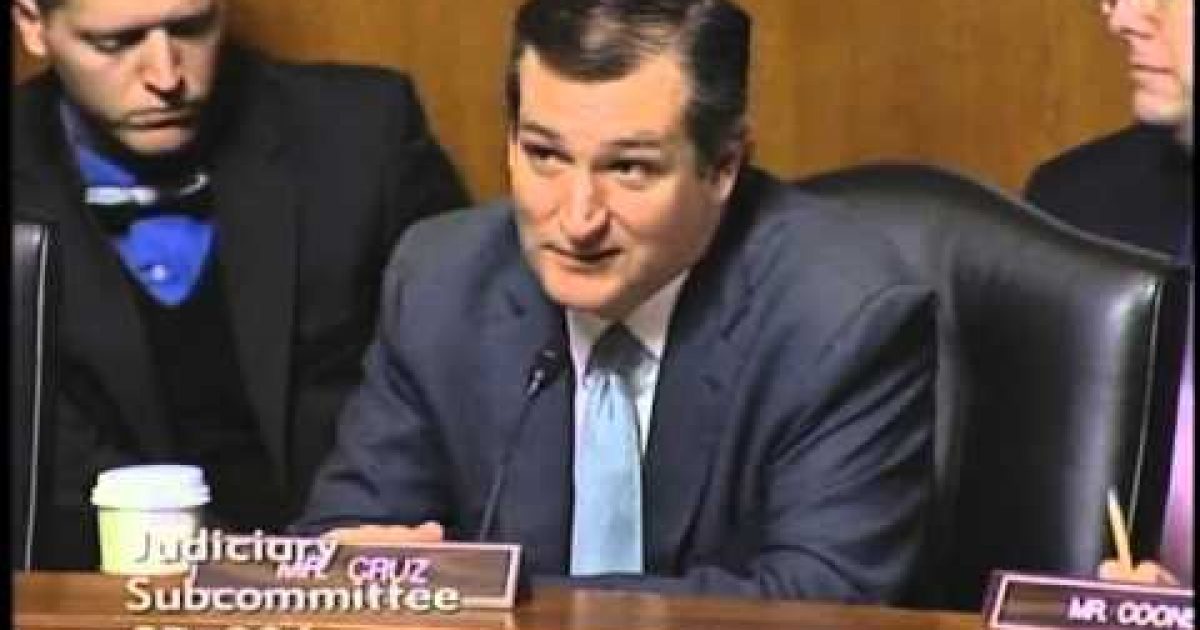 It was nothing short of brilliant Sen. Ted Cruz (R-Texas) spoke with Sierra Club president Aaron Mair during a Senate Judiciary subcommittee hearing yesterday in an exchange proving that the climate change enthusiasts simply don’t want to listen to the facts.

Cruz kept asking Mair about the satellite data which shows that warming stopped over 18 years ago, but all Aaron Mair would do is check with “his people” sitting behind him and repeat over and over that 97% of scientists agree that global warming is real. It was reminiscent of the movie Rain Man, “Ten minutes to Wapner, Ten minutes to Wapner.”

So Cruz tried shifting tactics and asked if the data proved he was wrong would he retract his testimony that climate change is real and like a robot, the President of The Sierra Club would lean back listen to his people and say he agrees with the 97%…yadda, yadda, yadda.  It was a classic exchange and the video is embedded below.

At one point in the exchange Sen. Cruz mentioned that the study, which concluded that 97% of scientists agreed with the climate change hypothesis, was bogus.  He was totally correct. The results of the study which declared the near unanimity was totally misrepresented by the study’s author and the media.

The study reporting the 97% consensus “Quantifying the consensus on anthropogenic global warming in the scientific literature”  by John Cook, and friends under the halo of the University of Queensland was published in 2013 and according to Watts Up With That when the source data for the study was published on line the University of Queensland got so worried, they threatened a  lawsuit over use of Cook’s ’97% consensus’ data for a scientific rebuttal.

The way the study was conducted was Cook and his buddies looked at peer reviewed studies and classified them a either agreeing or disagreeing with the hypothesis. The 97% figure was really 97% of the studies they reviewed. However investigative journalists at Popular Technology reported the 97% Study falsely classifies scientists’ papers, according to the scientists that published them

Cook and his colleagues, for example, classified a peer-reviewed paper by scientist Craig Idso as explicitly supporting the ‘consensus’ position on global warming “without minimizing” the asserted severity of global warming. When Popular Technology asked Idso whether this was an accurate characterization of his paper, Idso responded, “That is not an accurate representation of my paper. The papers examined how the rise in atmospheric CO2 could be inducing a phase advance in the spring portion of the atmosphere’s seasonal CO2 cycle. Other literature had previously claimed a measured advance was due to rising temperatures, but we showed that it was quite likely the rise in atmospheric CO2 itself was responsible for the lion’s share of the change. It would be incorrect to claim that our paper was an endorsement of CO2-induced global warming.”

A more extensive examination of the Cook study by the New American, reported that out of the nearly 12,000 scientific papers Cook’s team evaluated, only 65 endorsed Cook’s alarmist position. That is less than 0.97%.

The crucial point here is the qualifying clause, “of those who have an opinion.” In other words, even the highly questionable Cook study doesn’t actually claim, as President Obama does, that “Ninety-seven percent of scientists agree.” In fact, when examined closely, one finds that the study says only one-third of the authors of the published research papers they examined expressed an opinion that the Cook team interpreted as either an implicit or explicit endorsement of AGW. So now its 97 percent of one-third of selected scientists in a sampling of research papers. That’s a far cry from the 97 percent of all scientists claimed by President Obama and many of the media stories. And, as we will show below, even this admitted dramatically lower consensus claimed by the study is fraught with problems and falls apart further under examination.

From the data and methodology Cook has allowed the public to see, the 97% consensus figure is totally bogus, and the fact he preventing full disclosure of his data, via University of Queensland, by threatening legal action suggests there may be more nefarious things being withheld.

The bottom line is that Senator Cruz was correct and Sierra Club president Aaron Mair was full of baloney (or at least the people sitting behind him feeding him answers). And for their baloney they get the worst rating on our global warming liar scale…four ugly Christmas sweaters (because some scientists say we are going to have a mini ice age soon and they will need to keep warm).

And if you missed the great Ted Cruz/Aaron Mair exchange you can watch the video below: