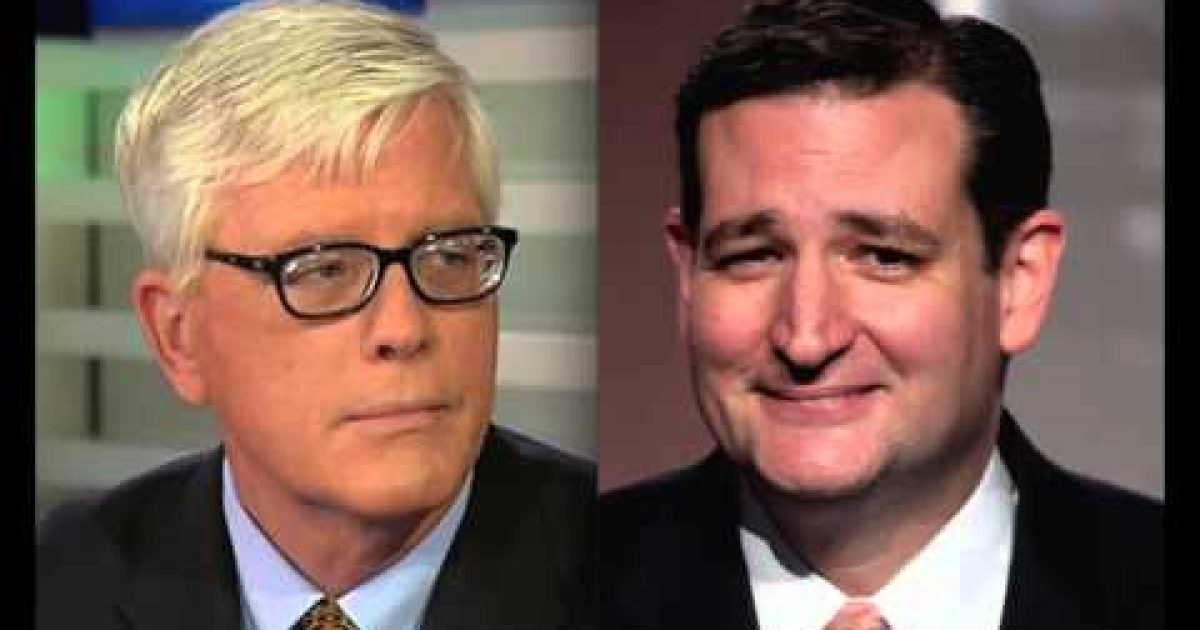 Texas senator and candidate for the GOP presidential nomination Ted Cruz was a guest on Wednesday evening’s Hugh Hewitt Show, one of the primary topics of their discussion was the the speech about the Iran deal President Obama made earlier in the day.

Host Hewitt began by playing part of the speech where the president crossed the line with a petty comment.

“It’s those hard-liners chanting “Death to America” who’ve been most
opposed to the deal! They’re making common cause with the Republican
caucus”

The senator’s reaction was a lot classier than the president deserved,

Well, you know, it is just sad that the levels to which
this president and the Democratic party today will stoop. That kind of
slander.

Cruz: Well, Hugh, we’re starting on Friday right after the debate so I’m headed to the airport now to head to Cleveland for tomorrow night and then right after we start the bus tour.

Hewitt: Where are you going on the bus tour?

Cruz: We are going essentially through the SCC primary, so we’re starting in South Carolina. We’re headed to Georgia, Alabama, Mississippi, Tennessee, Arkansas, and Oklahoma. And we got multiple stops in each state, and anyone who wants to come by can come to our website at tedcruz.org. You can get the details of when and where we’ll be over the next week throughout the South.

Hewitt: Now, Senator, we’re friends. I wanted to give you a couple of pointers. One, do not bring up the SCC in Ohio tomorrow, alright?

Hewitt: Now, I got some other Ohio primer for you here which I’m gonna share with your colleague, Lindsey Graham who’s in the other one. Ohio is the seventeenth state in the Union. You knew that. It’s the home of the Wright Brothers, John Glenn, and Neil Armstrong, so we’re responsible for basically the advance of the world through aviation. Did you know that Roger Ailes is from Warren, Ohio, Ted Cruz?

Cruz: I did not! That’s why I call into your show, Hugh, ‘cause I learn something everyday.

Hewitt: Well, Roger Ailes went to my high school and the other thing you need to know is Bill Hemmer–if you seen him–he went to Miami University, but here’s the key thing you need to know–don’t bring up the fact that the Browns haven’t won since 1964 and the Indians haven’t won since 1948 but if you really need to take out somebody–I don’t know if his name might be Donald or Jeb or Scott–but if you really need to take out someone, bring up their past association with the former owner of the Browns whose first name is Art, whose last name is never mentioned on this show and that will get them booed off of the stage.

Cruz: (laughs) I think that is excellent advice and I may just have to tuck that away in the quiver.

Hewitt: Now, let’s get serious, and this unfortunately very serious. The president said the most slanderous thing about fellow Americans today and he said it about you and your fellow Republicans. Let me play it for you. . .

Obama (on tape): It’s those hard-liners chanting “Death to America” who’ve been most opposed to the deal! They’re making common cause with the Republican caucus.

Hewitt: So Senator Cruz, you’ve been called a lot of names in the last five years, but I don’t think you’ve ever been compared to the Iranian Revolutionary Guard.

Cruz: Well, you know, it is just sad that the levels to which this president and the Democratic party today will stoop. That kind of slander. . . I tell you, I, literally just minutes ago, left a classified briefing with senior administration officials–[garbled]–the so-called Inspections Regime. I’m not at liberty describe the details because it’s classified, but it is public that before any site can be inspected, Iran gets twenty-four days notice which on its face makes a mockery of the promise of “anytime, anywhere” inspections and indeed, if you think about it, in a local law enforcement setting, imagine if the state of California passed a law that said law enforcement cannot execute a search warrant on a drug lord without giving the drug lord twenty-four days notice of the place to be searched. Now any such law would produce predictable results–100% of the time, the searches would produce no drugs. Now even the dumbest drug lord in the world with a twenty-four days notice could move the drugs, but it’s even worse, I will tell you, listening to the classified briefing of the deals of the Inspection Regime. These inspections are not materially different than if we simply picked up the phone and called the ayatollah and asked him, “Excuse me, sir, are you developing nuclear weapons? No? Sounds good to us.” The idea that we are trusting Iran to “inspect themselves” is. . . so laughable as be horrifying and I’ll tell you why it’s horrifying, Hugh. Because no one would sign this agreement without full well the certain consequences of this agreement are that Iran acquires nuclear weapons. That anyone that would want a theocratic ayatollah who chants “Death to America” while burning American flags is someone who is willing to profoundly endanger the national security and the lives of millions of Americans.

Hewitt: Well Senator Cruz, I’m beginning to believe that the president is desperate and that comment today comparing some of your colleagues–Tom Cotton, Joni Ernst, Dan Sullivan– [that] have been face-to-face with the Iranian Revolutionary Guard in war-torn Iraq. To slander every Republican, including combat veterans, by comparing to the “Death to America” crowd–doesn’t that signify desperation?

Cruz: Well, it does. Just a couple of weeks ago, I was part of a rally outside of the White House focused on the four American hostages who have been forgotten and abandoned in Iran. And the White House press secretary slandered the people protesting for the release of our hostages by calling them “war-mongers.” I mean, there’s a hatefulness to this, when people are standing out with yellow ribbons saying “Free Pastor Saeed Abedini”–a Christian pastor sentenced to eight years in prison for sharing his faith– “Free Amir Hekmati”–a United States marine wrongfully imprisoned– “Free Jason Rezaian”–a Washington Post reporter thrown into an Iranian prison for doing his job as a reporter– “Free Robert Levinson”. . . All of those are names. . . But I’ll tell you, Hugh, the desperation you talked about, it really became evident just over a week ago when the president was in Africa. And he singled me out by name and attacked me directly because I had observed that if this deal goes through, the United States government–the Obama administration–will become the world’s leading financier of radical Islamic terrorism. And President Obama said, “Well, that rhetoric is over-the-top, it’s over-the-line, it’s overheated. Now, interestingly enough, Hugh. . . he didn’t dispute the facts of what I was saying. The facts are number one, that Iran is today [a] sponsor of terrorism. The facts are number two, that if this deal goes through, over a hundred billion dollars will flow into Iran. And the facts are number three, the billions of those dollars will end up in the hands of Hamas, of Hezbollah, of the Houthis. . . And when billions of dollars under the direct control of the U.S. Government go to jihadists who use that money to murder Americans, Israelis, and Europeans, then the administration bears responsibility for what it’s done with that money. And in the entire course of his response, he claimed it was rhetoric, but he didn’t point to any other entity on earth that would be a larger financier of radical Islamic terrorism.

Hewitt: I actually do not know how the president–

Cruz: The truth is its rhetoric.

Hewitt: I don’t know how the president can say anyone is over-the-top after comparing you and your Republican colleagues to the “Death to America” chanting Iranian Revolutionary Guard. It’s. . . mind-boggling. Let me turn to the most repulsive thing in the week and the second subject tomorrow which I hope comes up besides the Iranian deal which is the Planned Parenthood trade in baby parts–

Hewitt: . . . It’s illegal. It’s infanticide. It is quite clearly the most grotesque thing the American people have had to deal with. I’m asking Donald Trump on Monday this show, Carly Fiorina on this show. I’ll ask Lindsey Graham next hour. Should the Republicans refuse to fund the government if Planned Parenthood funding is there, even if it means a shutdown, Ted Cruz?

Cruz: Yes we should use every procedural tool we have to stop the taxpayer-funding of Planned Parenthood. This should not be a difficult question. This is something I have been calling for for many, many days. Anyone who hasn’t watched these videos–these videos are horrifying. They show senior Planned Parenthood officials laughing and sipping chardonnay while they barter and sell the body parts of unborn children. I want to encourage–if you can stomach it–to watch these videos and even if you are pro-choice–even if you support abortion–ask yourself while watching these videos, “Are these my values?” Now one of the real consequences–Hugh, you’re a very experienced lawyer–these senior Planned Parenthood officials are apparently on film confessing to multiple felonies–it is a federal felony to sell the body parts of unborn children. It carries up to a ten-year jail-term. If we had even a shred of integrity in the U.S. Department of Justice, they would have already opened an investigation and would prosecute both the individuals who are caught on tape and Planned Parenthood as a national enterprise for being a national criminal enterprise. And how striking is it that the modern Democratic party [of] Hilary Clinton is so extreme that they are willing to threaten to shut down the government in order to try to force continued taxpayer funding–your taxes and mine–going to an ongoing criminal enterprise that is committing a pattern of multiple felonies?

Hewitt: Now–forty-five seconds left, Senator Cruz, though I want to be very clear. If it comes down to it in September, when the continuing resolution runs out, if the Democrats insist on it, are you for, and that means shaping a media message now, getting ready for it? Are you for shutting down the government until Planned Parenthood is defunded?