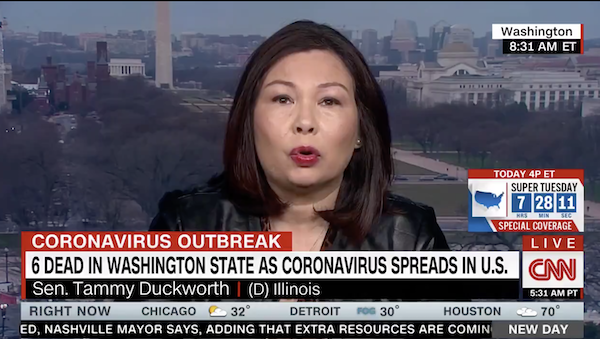 Un-dirty-word-believable! Does Senator Duckworth think this little of people of faith?!  Putting politics before the public,  Senator Tammy Duckworth(D-IL) decided to go after Vice President and his faith. Tammy Duckworth VP Pence

NBC’s Meet The Press host, Chuck Todd, has said that the left isn’t politicizing the coronavirus for political gain.

This Twitter thread by the GOP’s Rapid Response Director, Steve Guest names the Democrats that have been politicizing the Coronavirus. In his thread, Guest has listed Speaker Nancy Pelosi, Senator Chuck Schumer, along with several other politicians saying that President Trump has somehow failed in his response to the outbreak, as well as major news outlets like The New York Times, The Washington Post, and Politico that have all tried to tie the Coronavirus to President Trump.

It looks as though that’s become a strategy.

Senator Tammy Duckworth(D-IL) decided to take the attack in a whole new direction — she went after the Vice President and his faith.

In a clip from CNN on Tuesday morning, Sen. Duckworth was so unbelievably condescending when she spoke about Vice President Pence’s leadership on the Coronavirus task force. Presumably referring to a photo that was going around on social media of the Vice President and the rest of the Coronavirus team bowing their heads in prayer, Sen. Duckworth mocked his faith. She said, “

They certainly need someone at the head of their efforts who actually believes in science, not Vice President Pence — a guy who says he’ll just pray over these things.”

She then says that the Trump administration has shown “no leadership” on the issue.

Why can’t Washington Democrats show an ounce of bipartisanship on coronavirus?

Here is Sen. Tammy Duckworth deriding @Mike_Pence as “a guy who says he’ll just pray over these things.”

It’s false, insulting to people of faith, not to mention zero pushback from @CNN. pic.twitter.com/iQgt8ACXv1

She then says that the Trump administration has shown “no leadership” on the issue.