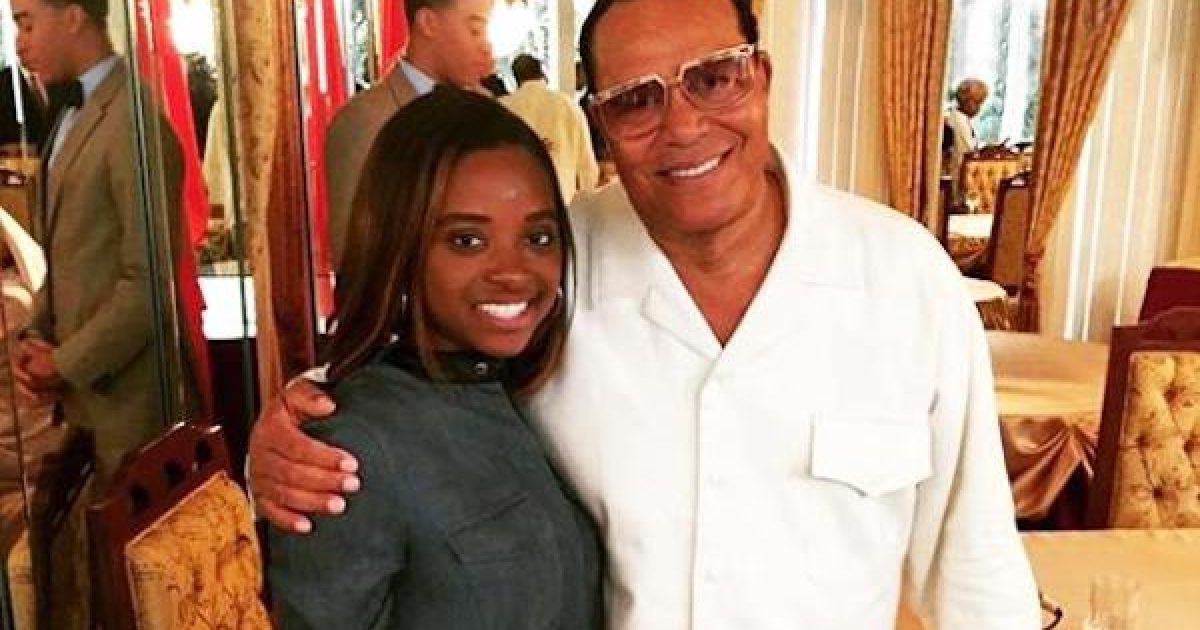 If the name sounds familiar, it may be because New York Senator Kirsten Gillibrand praised anti-Semite Tamika Mallory and her fellow Jew-hater Linda Sarsour in the 2017 Time Magazine Time 100 issue. Ms. Mallory is also one of the founders of the “Women’s March” and a friend of Louis Farrakhan.

Last month Tamika Mallory took a trip through Israel along with Judea and Samaria, seemingly with the purpose of learning new ways to be anti-Semitic and anti-Israel. She did not disappoint.

The Center for Constitutional Rights was the group that sponsored Mallory’s trip. They said in a statement on May 1st that the tour was designed to help participants “better understand the human rights situation in Israel and Palestine, including the history of systematic displacement and institutional racism, as well as the work of human rights defenders there.”

At the end of May, after she returned to the United States, Tamika Mallory spoke via video at an event hosted by her trip’s sponsor, the Center for Constitutional Rights. Her anti-Semitic friends Farrakhan and Sarsour must have been proud because Mallory opined that the very creation of Israel was a human rights crime.

“When you go to someone’s home, and you need a place to stay, you ask ‘Can I come into your home and can I stay here, and can we peacefully coexist?’ You don’t walk into someone else’s home, needing a place. It’s clear you needed a place to go – cool, we got that! I hear that! But you don’t show up to somebody’s home, needing a place to stay, and decide that you’re going to throw them out and hurt the people who are on that land. And to kill, steal, and do whatever it is you’re gonna do to take that land! That to me is unfair. It’s a human rights crime.”

While she might claim her statement wasn’t anti-Semitic, only anti-Israel, per the U.S. State Department definition Mallory was indeed spewing Jew-hatred.  As posted on the Department’s website in 2016.

“Manifestations might include the targeting of the state of Israel, conceived as a Jewish collectivity. However, criticism of Israel similar to that leveled against any other country cannot be regarded as anti-Semitic.” Among the examples, the State Department included as anti-Semitic was, “Denying the Jewish people their right to self-determination, e.g., by claiming that the existence of a State of Israel is a racist endeavor.”

In other words, what Tamika Mallory belched out at the end of May was indeed anti-Semitic.

Along with being anti-Semitic, Mallory’s words show she doesn’t know much about history. Jews have owned land in what is now called Israel since Abraham bought a burial cave for his beloved wife Sarah in Hebron almost 4,000 years ago.   And there have been Jews (they were called Israelites back then) living in the holy land since about 40 years after the exodus from Egypt when Joshua Ben Nun led the Jews across the Jordan River about 3,200 years ago. Note: for those who haven’t been to Israel, in modern times the Jordan is more like a creek).

When the modern state of Israel was born in 1948, the Jews weren’t injected into the land by outsiders. Jews who lived in the diaspora joined their brethren who never left when the Romans changed the name of their country from Judea to Syria-Palaestina in 135 C.E. as punishment for the Bar Kokhba revolt.

Powerful briefing… Anyone visiting Jerusalem should connect with @GrassrootsJlem. I learned a lot. https://t.co/bFU0R9J30o

Grassroots Jerusalem fits in well with Tamika and the other Jew-hating leaders of the Women’s March. As explained by NGO Monitor, the organization is a supporter of the anti-Semitic boycotts, divestment, and sanctions (BDS) movement. It also promotes the Palestinian narrative of a “right of return,” which if implemented would allow the original Palestinian refugees, their children, in-laws, first-cousins twice removed, etc. to move into Israel. Thus they have increased the initial estimate of 720,000 refugees (less than the 900K Jewish refugees from Arab countries) to over five million. Only 30-50K of the original refugees are still alive. Israel-haters push for the “right of return” because the 5 million crowding into Israel would effectually mean the elimination of Israel as the nation-state of the Jewish people).

Writing during her trip to Israel, the New York Post called Mallory one of the new faces of anti-Semitism

“But, they, too, are the new faces of anti-Semitism. Mallory is currently in Israel on a propaganda tour organized by a left-wing outfit. On Sunday, she blamed President Trump’s travel ban and border wall on the president following Israel’s “playbook. (…) That campaign seeks to isolate Israel and illustrate the intersectional ideology at the heart of the alliance between Black Lives Matter and anti-Zionist groups. Supporters of intersectionality [connection] falsely assert a link between the struggle for racial equality and gay rights with the war on Israel.”

When Starbucks planned its afternoon of anti-bigotry training, it included the Anti-Defamation League as a contributor. But Tamika called for a boycott of Starbucks for including the very liberal ADL. She wanted Starbucks to include organizations such as Jewish Voice for Peace (JVP) which was named by the ADL as one of the ten most anti-Israel organizations in the country. The other groups recommended just as bigoted as JVP.

“My people…don’t be fooled… Pay close attention to the entire CHESS BOARD! #boycottstarbucks pic.twitter.com/jWYF3Xt80j — Tamika D. Mallory (@TamikaDMallory) April 17, 2018,” she tweeted, along with pictures that read:

Mallory directed her venom at the ADL because began as a Jewish organization. Anyone with the slightest knowledge of the ADL knows it doesn’t now, and never has attacked “brown and black people.” In fact, the only people the ADL hates are people that do not agree with their progressive-politics first, policies.

Tamika Mallory’s latest anti-Semitic speech should be a reminder to anyone who supports the Women’s March organization that Jew haters lead it. While Linda Sarsour’s hatred has received more attention, Mallory’s anti-Semitism disguised as anti-Israelism is just as dangerous. One of the other original Women’s March leaders Rasmea Yousef Odeh was deported later in 2017. She’s a woman who spent a decade in an Israeli jail for her involvement in two terrorist bombings made as a member of the Popular Front for the Liberation of Palestine (PFLP). One of those attacks, a 1969 bombing of a Jerusalem Super Sol Market killed two Hebrew University Students Edward Joffe and Leon Kanner while they were shopping for groceries.

In other words, while many believe the Women’s March group was founded to garner more rights for women, it was founded by terrorists and anti-Semites.  Think about their leadership before you participate in their next event. Because unless you agree with their anti-Semitism, you probably should not associate with the Women’s March.