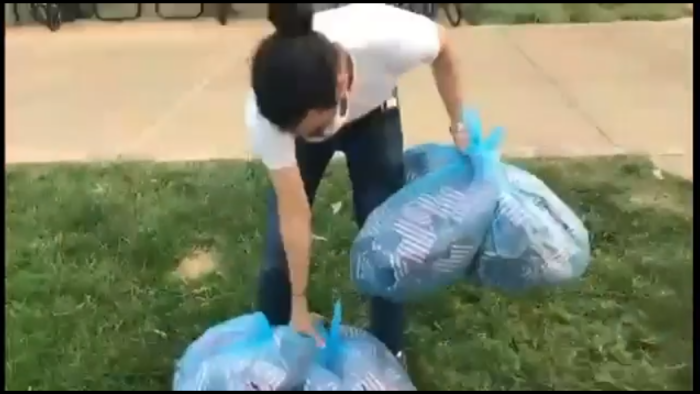 Fadel Alkilani, a student in leadership at WUSTL (Washington University St Louis), was videoed taking down 2,977 American flags that were set up for the College Republicans ”Never Forget” project. He defiantly stuffed the flags in trash bags. When confronted by the young man who took the video, he said, “Kinda weird when some random person just walks up and photographs you.” Then he proceeded to walk away with the trash bags full of flags. (YAF) Campus police were notified.  takes 9-11 memorial flags

Campus police warned him about the vandalism twice, the first time on Friday, the 2nd time after they were notified on Saturday. Then they advised him he would be arrested if he did it again. The flags were then re-planted in the display by the College Republicans who originally put up the memorial.

Further research revealed that Alkilani is chairman of the student senate finance committee, which is charged with doling out funds to student organizations.

Some members of the College Republicans want him removed from his position and even the college itself. Truth be told, the man bun alone should have gotten him expelled.

Alkilani bragged on his Twitter account before turning it to private that he wanted to “protest against American imperialism and the 900,000 lives lost as a result of post 9/11 war.”  What he did is not a “protest” it is vandalism.

When questioned about what he did by the Young Americans Foundation (YAF), he responded, “I did not violate any university or legal policy. Now go away.”

Students say that Alkilani had attempted to destroy the memorial on Friday night but was told to stop by campus police.

The WUSTL issued the following statement:

“We were disappointed to learn about the disruption to the 9/11 display on Mudd Field. We condemn the interference with the expression of support by the College Republicans for the victims of the national tragedy that took place 20 years ago today. The actions surrounding this incident were not on behalf of the university or a university-sponsored organization. We value freedom of expression in all forms and will work to ensure that all students are able to express their points of view through appropriate channels without disrupting the rights of others to show support for causes they care about. This is a critical component of our core values and we are committed to facilitating free speech on our campus.”

They did not mention any disciplinary action. (Also not surprising).

Alkilani has no clue what really happens in the ‘post 9/11 war’ Middle East countries. The Taliban, for example, do not allow any effeminate actions by a male (that man-bun, and the note about ”he/him” on his Twitter account gives him away) – they murder people for violating Sharia Law. They have continued to behead people and/or shoot them (not necessarily in that order) after we left. Brainwashing has left many of our college youth completely oblivious to the truth by indoctrinating them with talking points that have no basis in reality.