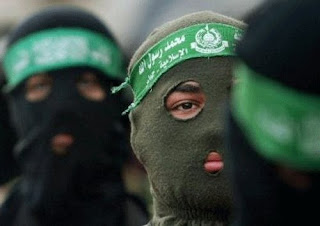 No, the headline is not the opening joke for a new Palestinian comedian. According to a Yahoo news story. The “rank and file” Palestinian Arabs have grown tired of being ruled by terrorist organizations and bullies wearing black ski masks, especially Hamas variety. They are refusing to close their business when told by the sparring factions and just want some sort of law and order imposed.

The situation has degraded to the point where many of the militias formed by Hamas and Fatah are now out of control–getting no direction from their command. In fact there are some Palestinians that are so fed up they want Israel to take back the PA controlled territories and give the West Bank to Jordan. If that were to happen, do you think that the British would boycott Jordan?

Palestinians say fed up with gunmen

For most Palestinians, black-hooded gunmen have long been respected symbols of resistance against Israeli occupation.

Now, frequent internal fighting and lawlessness gripping the Palestinian territories have transformed the militants into no more than gangsters in the eyes of many of those who once saw them as heroes.

“It’s very ironic but I’m relieved the Israelis have started a bombing campaign. The gunmen killing each other on the streets were forced to go into hiding,” said Mai, a Gaza housewife, referring to strikes aimed at halting rocket attacks on Israel.

Reflecting mounting public concern over recent fighting between Islamist group Hamas and his Fatah faction that killed some 50 people, President Mahmoud Abbas said this week Palestinians were on the verge of civil war.

The threat posed by internal bloodshed, he said, rivaled the dangers presented by Israeli occupation.

Gunmen, who once battled Israeli soldiers in the alleyways of towns and refugee camps in the West Bank and Gaza, have turned against each other in an on-going power struggle between Hamas and Fatah — partners in a unity government.

Some of the militias formed by Fatah and Hamas are no longer controlled by their political leaderships and owe loyalties to clans or criminal gangs that enforce their own rules.

“Many of these groups are now a burden on society. They were created to fill a security vacuum under the pretext of national resistance, said legislator Nasser Jum’a, once a leading member of Fatah’s al-Aqsa Martyrs Brigades.

“They then blackmailed people, attacked them and confiscated their freedoms as the weak official security forces failed to punish them,” he said.

Jum’a said ordinary Palestinians were so fed up with the armed groups “they now wish the Israeli occupation would take over in Gaza or hope for the return of Jordanian rule in the West Bank” to get rid of them.

In one recent incident in the West Bank city of Nablus, gunmen told shopkeepers to close their businesses as a sign of solidarity with a Fatah leader arrested the day before in an Israeli raid.

The gunmen shot in the air, stole a bulldozer from the Nablus municipality and closed the main road with mounds of sand, dividing the city in the same way Israeli forces had during their operation.

For the first time in the city, a bastion for militants, most of the shop owners refused to close down.

“These people have caused us a lot of suffering and are not involved in national resistance,” said Najah al-Jabaji, who works in an advertising agency in Nablus.

But while sentiments seem to have turned against the militants, Israeli raids to detain them elicit strong public condemnation among Palestinians, who have long demanded the release of those held in Israeli jails.

Gunmen spearheaded a Palestinian uprising that began in 2000 and gained strength when Israeli military operations effectively destroyed the infrastructure of the official security services, some of whose members also belonged to militant groups.

The power vacuum was filled by militias loyal to a variety of political factions and rivalries spiraled into bloodshed after Hamas trounced Fatah in a January 2006 election.

More than 600 Palestinians have been killed in factional fighting since the vote, the Palestinian Independent Commission for Citizens’ Rights says, a figure approaching the number of Palestinians killed by Israeli forces in the same period.

In a poll conducted by the Palestinian independent pollster NearEast Consulting in the West Bank and Gaza in May, 70 percent of those surveyed said they feel more insecure since Hamas came to power last year.

The poll, which coincided with a surge in internal fighting, also found 92 percent of respondents described themselves as depressed or very depressed, up from 22 percent in April.

“The internal crisis in the occupied territories was the main issue that made Palestinians feel depressed in May. It can also be noted that the problem of the Israeli occupation took a back stage in May,” commentary accompanying the poll said.

“The message is that people are tired of inter-Palestinian fighting. They are fed up with both Fatah and Hamas, and all they want is to live in security before any thought of fighting Israel,” Palestinian analyst Bassem Izbedi told Reuters.