Take That Establishment!!! 64% Of GOP Voters Would Join Trump If He Started A New Party 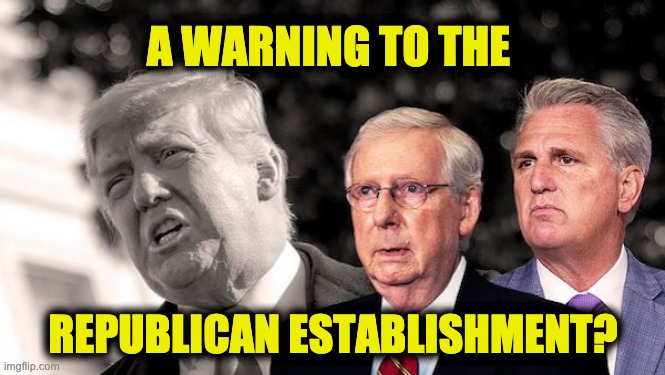 This should be a message to the GOP establishment.  A new Hill-HarrisX poll shows an overwhelming percentage of Republican voters would join a new political party established by former President Donald Trump. The poll and ones like it should be a message to the GOP establishment.  The same establishment that rejected the Tea Party is now trying to throw out the MAGA Trump supporters. And those supporters a ready to bolt if Trump does.  I don’t believe that President Trump will form a new party or even run in 2024, but it’s still early.

The Hill-HarrisX poll survey asked how likely voters would be to join a Trump-led party.

Sixty-four percent of Republican voters said they would be likely to cross over, with half of those saying they would be “very likely” to join. The survey also found that a surprising chunk of independent voters (28 percent) and Democrats (15 percent) said they would sign up for a third party formed by Trump.

Will Trump Form a New Party?

The Wall Street Journal reported in January that Donald Trump is interested in creating a new third party once he leaves office – with rumors indicating it would be dubbed the ‘Patriot Party.’ The Journal points out that Trump “has a large base of supporters” but adds the effort “would require a significant investment of time and resources.” And a third party effort would split the conservative vote–guaranteeing that Biden will be followed by another extreme leftist.

The Wall Street Journal is reporting that Trump has discussed starting a new political party, to be called the Patriot Party. https://t.co/lSlebhuiOh via @wsj

Dritan Nesho, CEO and chief pollster at HarrisX, notes the latest poll shows “Trump remains a political force to be reckoned with.”

How much sway does he have?

“If Trump were to split from the GOP and create his own party, polling suggests he might well create the second largest political party in the country, knocking the GOP down to third place,” Nesho added.

92% of Trump voters want him to be the 2024 nominee. Don't believe corporate media myths about some massive GOP split — the voters unite behind an America First workers' party…https://t.co/c7Z8A33QA2

Has The Establishment Been Chastened?

Reports last month indicated Senate Majority Leader Mitch McConnell (R-KY) had signaled support for impeachment, thinking the trial could help the GOP get rid of Trump and his movement.

The Daily Mail at the time said GOP sources indicated there is a “better than 50/50” chance McConnell votes to convict Trump in next week’s impeachment trial because he “wants him purged from the GOP.”

McConnell would later vote that the House impeachment was unconstitutional but has still not said whether or not he would vote to convict. We will find that out within the next few days. But based on the reaction to the Daily Mail article McConnel who is the consummate establishment political operative has probably been chastened and will vote against conviction.

He has seen what happened in the house. An earlier report earlier this week that 7 out of the 10 Republican lawmakers who voted in favor of impeaching Trump are already facing primary challenges for their congressional seats.

Rather than seeing him purged, however, Republican voters aren’t wavering on their support of Trump, and this new third-party poll is just another sign that he still holds political leverage whether within the GOP or not.

A poll from Axios-Ipsos shows voters are taking sides – and it isn’t with the establishment.

The results show a vast majority of Republicans do not hold Trump responsible for the Capitol riots (perhaps because he isn’t). The Axios poll adds that Republicans believe he had a right to challenge the election, and a whopping 92 percent still see him as their preferred nominee in 2024.

Republicans across the U.S. are siding with President Trump over Senate Majority Leader Mitch McConnell — big time — according to a new Axios-Ipsos poll. https://t.co/jqkhRlfE6O pic.twitter.com/CgnV3xLttp

Personally I do not believe that Trump will run again. Does he really need to fight the slanders and lies all over again?  In fact one report says he is actually happier that he is no longer President.

“The president has said he feels happier now than he’s been in some time,” said former Trump campaign strategist Jason Miller in an interview with the UK’s Sunday Times.

“He’s said that not being on social media, and not being subject to the hateful echo chamber that social media too frequently becomes, has actually been good,” Miller told the outlet.

“That’s something the First Lady [Melania] has backed up as well. She has said she loves it, that he’s much happier and is enjoying himself much more,” the ex-aide said.

Trump has also benefitted from no longer being under the pressures of the highest office, Miller said.

Since Trump left the White House, it’s been “the first time in years that I saw the president truly relaxed,” Miller told the paper.

It’s a good thing that President Trump is happier now that he’s out of office…America, on the other hand is much sadder now that we are stuck with dementia Joe.