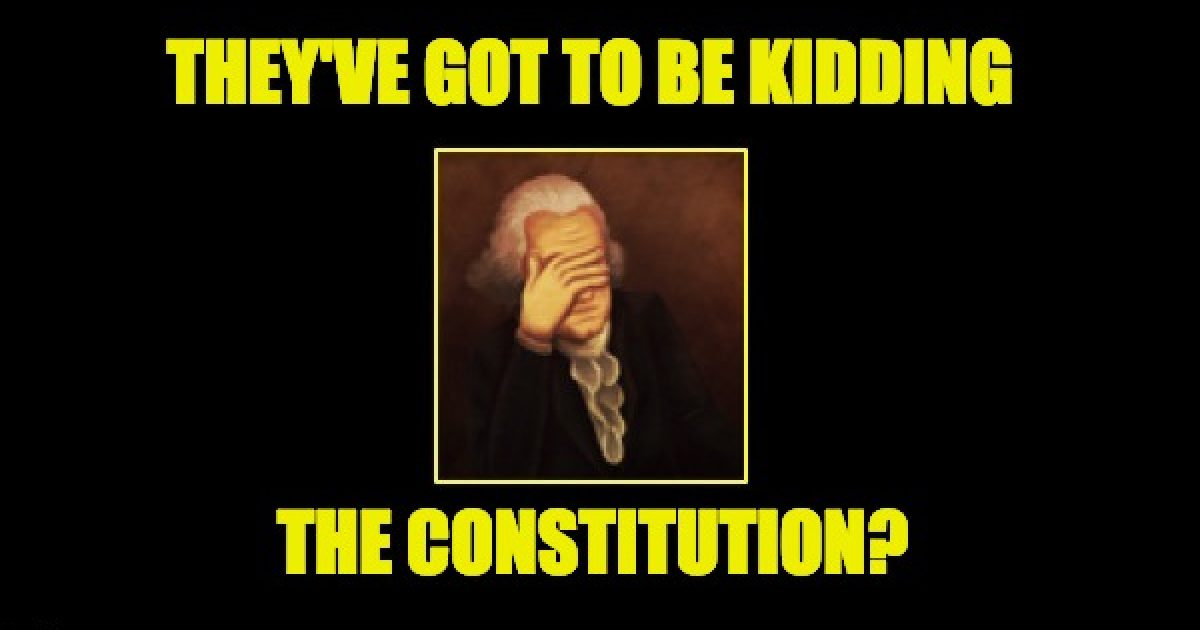 Syracuse University in upstate New York denied a grant for the YAF, a conservative student group because the group asks students to believe in the U.S. Constitution.

Per the YAF “The Sharon Statement continues to function as the foundational document for every YAF chapter across the country.” The statement explains the group’s allegiance to the U.S. Constitution:

We, as young conservatives, believe (…)

(…)That the Constitution of the United States is the best arrangement yet devised for empowering government to fulfill its proper role, while restraining it from the concentration and abuse of power;

That the genius of the Constitution—the division of powers—is summed up in the clause that reserves primacy to the several states, or to the people, in those spheres not specifically delegated to the Federal government;

Based on that statement Syracuse University insists that the YAF would not get school funds because it was “exclusionary” to “international students” because of the group’s fealty to the U.S. Constitution.

That’s right, Syracuse University denied school recognition and funding for Young American’s Foundation  (YAF) because the school contends that believing in the U.S. Constitution is “discrimination.”

The Syracuse Office of Student Activities denied YAF’s application, in part because members must support the “Sharon Statement,” which is a statement of support for the U.S. Constitution. Syracuse took issue with the Sharon Statement, alleging that adhering to it violates the college’s policy of non-discrimination.

“The Board considers the ‘Sharon Statement’ to be contradictory to Article XI Statement of Non-Discrimination,” Syracuse’s RSO Review Board stated in its rejection email to the group, according to documents obtained by Campus Reform. “Additionally, requiring students to agree in the superiority of the U.S. Constitution is exclusionary to international students and other individuals.”

The school’s board went on to attack YAF’s national association:

Additionally, Syracuse’s RSO Review Board took issue with the fact that Young Americans for Freedom is associated with its parent organization, Young America’s Foundation, which the board claims has “extensive control” over the former organization.

Young America’s Foundation has a “pattern” of promoting discourse through “inflammatory” means, according to the Board.

Koen Weaver, who is the group’s vice chairman, told Campus Reform, “while I understand the important job of the Office of Student Activities in confirming RSOs on campus, I am concerned by the bias and almost anti-Americanism displayed by our rejection.”

“I cannot fathom how an American University could find fault with students upholding and promoting the ideals of the U.S. Constitution,” Weaver added. “Calling the constitution non-inclusive, while completely ignoring the inflammatory rhetoric of the anti-Capitalist and anti-Israeli [rhetoric] of the university’s International Socialist Organization, shows the obvious political bias, if not the liberal indoctrination agenda of the Office of Student Activities.”

Weaver was referencing the fact that the board previously approved an application by the International Socialist Organization to be an RSO. As an RSO, the group promotes open borders on its Facebook page, which is linked from the official university website. The group’s cover photo states, “let them all in,” a reference to the caravans at the border. The group has also posted graphics that read,  “Capitalism Sucks” and, according to Murray and Weaver, put up flyers on campus that read, “from the river to the sea, Palestine will be free,[calling for the destruction of Israel]. 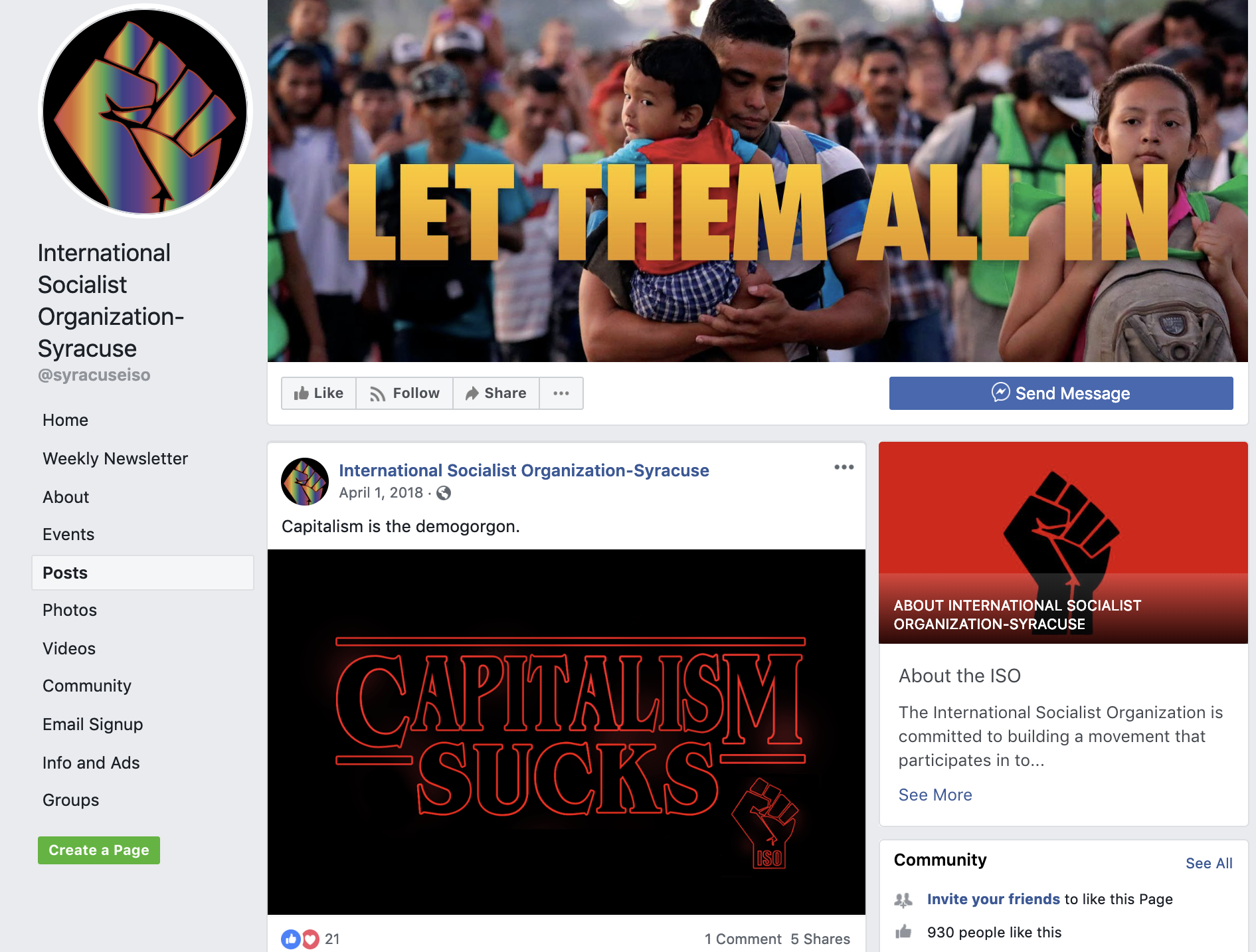 Interestingly another YAF chapter located at a University near Syracuse, Oswego State (where I started my college career) is also in the news because its members received threats after creating a “build the wall:” table on campus.

Might be snowy outside but that’s not stopping leftist from getting heated at our Build The Wall Table! #YAFonCampus #WinWithYAF pic.twitter.com/lbqfPphNeG

However, in the case of the SUNY Oswego YAF, the University supported their right to free speech.

The University president Deborah F. Stanley released a statement that said in part.

Yesterday, several violent threats were posted on social media against a recognized student organization and its members who were appropriately permitted to table in Marano Campus Center. University Police immediately opened an investigation and requested information from the social media host site. (…)The principles of free speech and expression are fundamental to an open society. As an academic community, we know that the building blocks of learning are based on the quest for information and analysis in the context of open inquiry, skepticism, and debate. While some ideas and opinions are vastly different from our own and may be an anathema to what we think and believe, I strongly encourage all students, faculty and staff who wish to rebut expressions of others to use their words and voices to add their experiences and understandings to the public “marketplace of ideas” that is the soul of SUNY Oswego. An ill-tempered and threatening response, even if provoked, may very well bolster those ideas you wish to debunk and may make you subject to judicial proceedings. Please know we will continue to encourage all members of our campus community to embrace diversity in all its forms–diversity of people, thought and expression.

Don’t you wish Syracuse and other liberal Universities believed in the diversity of thought?