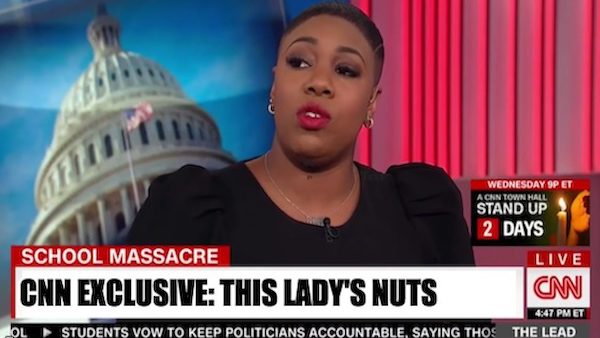 One of the most disgusting things happening during the spread of the Wuhan coronavirus is that leftists everywhere are trying to use the crisis to call President Trump racist while they stupidly parrot Chinese propaganda.

Symone Sanders, a senior advisor on Joe Biden’s campaign, was doing just that on The Story with Martha MacCallum. Sanders was criticizing the President for saying “Chinese virus,” which she considers being a “racial slur.”

Sanders is the same woman who said the FBI purposely let Parkland H.S. shooter Nikolas Cruz slip through their fingers because he was a white supremacist.

MacCallum interrupted Sanders and asked why it was a problem to acknowledge where the virus originated.

Sanders responded that it was offensive to many Americans, and it was “name-calling” and “pointing fingers.”

MacCallum was not having it. She interrupted again, and this time she put Sanders on FULL BLAST.

SANDERS: You tell me, Martha, you brought it up.

MACCALLUM: It’s called the Middle Eastern Respiratory Syndrome because that’s where it originated. So, this idea, this sort of rabbit hole of getting into this whole issue of racism, I just think is so counter-productive to what we’re trying to do here. And I just talked to this amazing scholar on China just moments ago, who said absolutely, China, at the leadership level has tried to obfuscate and be everything but transparent since the very beginning they lied and lied and lied about this situation. So, why is it not okay to recognize where it originated?

SANDERS: This is not about if China has been forthright and forthcoming. The reality is

MACCALLUM: Yes, it is. That’s exactly what it’s about.

SANDERS: Chinese government denied the reality — not in terms what the President of the United States is referring to this virus from the podium — the reality is, yes. The Chinese government refused to let American scientists in to research to see what was going on. That is a stark difference than what happened with the Ebola crisis, when the United States government demanded to come in into African countries, and so that is something that we should have and have to continue to push for. But my only point is — and I think the point of folks across the country that have raised an alarm or a question about this or a concern — is that they have noticed that it is offensive to them. And in times of strife, particularly when we’re dealing with a pandemic, that is currently affecting people that have had no contact with anyone overseas, there are people who —

MACCALLUM: No one is suggesting that American Chinese people are responsible. Every thinking human being who looks at this understands that the reference is to the origin of the virus and also the leader in terms of how that virus was handled in the country of origin. So, I’m gonna leave it there.

That was a thing of beauty, right there.

Symone Sanders is literally spouting Chinese propaganda to paint Trump as racist. She must not mind being a Useful Idiot for an authoritarian regime. Or perhaps she didn’t think it through because her Trump Derangement Syndrome has impaired her ability for rational thought. Whatever the reason, she’s one of Xi’s Puppets. Well….either that or an imbecile.

At CNN, Symone Sanders once claimed that the murder of Iowa college student Mollie Tibbetts who was kidnapped and killed by an illegal alien named Cristhian Bahena Rivera, had nothing to do with illegal immigration  (or as she called it, a person without papers).  Symone says poor Mollie would be home with her family today if it weren’t for “toxic masculinity.” Hey, Symone, if Rivera was where he was supposed to be (in Mexico),  Mollie Tibbetts wouldn’t have been separated from her family.

Mollie Tibbetts was murdered b/c she told a man to leave her alone while she was jogging. Her murderer happens to be undocumented. This isn’t about border security. This is about toxic masculinity. Mollie Tibbetts lost her life b/c a man couldn’t take her saying no. Full stop.