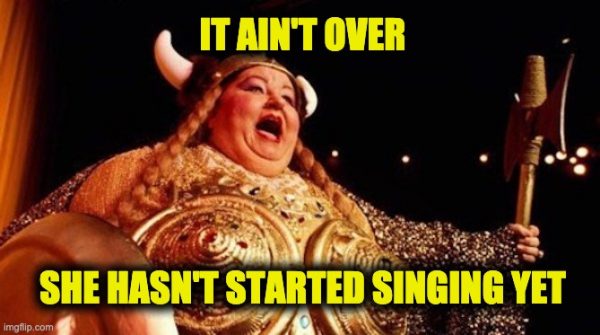 Right now, Joe Biden seems to be as cool as a cucumber, thinking he’s the next president of the United States. Hold the phone, Joey boy. It ain’t over ’til the fat lady sings’ and she isn’t even warming up. The Trump campaign and RNC have provided 131 sworn affidavits showing voter fraud, with possibly another 2,800 in the wings.

Here’s some voter fraud news out of Nevada and Michigan

NEW: election fraud lawsuit was filed in Detroit with affidavits alleging backdating ballots, no matching signatures. It includes an affidavit from a city employee claiming she was asked to backdate ballots:

The lawsuit is asking all evidence including computers and documents to be immediately preserved and for the certification of votes to pause.

Michigan Secretary of State’s office tells me it does not have a response right now because it’s not named in suit. May have statement later today.

Here’s a little more on Nevada, via News 3:

“There are hundreds of dead people who voted in Clark County,” said Matt Schlapp, the chairman of the American Conservative Union.

Schlapp named two examples: Fred Stokes Jr. and Rosemarie Hartle, both of whom died in 2017. Information from the Clark County Registrar’s Office does show that they received ballots for both Stokes and Hartle, but it’s unclear whether the votes were counted or rejected.

If that one isn’t voter fraud, it raises a question that no one has ever been able to explain -what happens when Americans die that makes them want to vote for Democrats.

The evidence is starting to come in. Monday Trump Press Secretary Kayleigh McEnany and GOP Chair Ronna McDaniel had a press conference where they presented 131 signed affidavits of voter irregularities just in Michigan.

Thank you all for coming. I am going to start with some of the irregularities we have seen in the state of Michigan specifically and then I’ll go a little bit broader but Michigan is my home state and in the county, Wayne County, Republican poll watchers were denied their legal right to monitor the election and purposely kept in the dark, both literally and figuratively, poll watchers or election workers blocked windows and padlocked doors. Obviously, that’s not going to instill confidence. There are thousands of reports of poll watchers being intimidated and unable to do their job and as of 4:00 p.m. this afternoon, 131 affidavits have been completed just in Michigan with over 2,800 incident reports that have been submitted to us since Election Day. Two new lawsuits were filed today by people who were working in Detroit and a whistleblower who has gotten their … We have gotten their information at the Eastern District Court of Michigan.
As you guys can understand with 2,800 incident reports, this is a lot to track down. It means we’re interviewing these people, we’re getting their statements and we’re turning them into affidavits, but that takes a lot of time and effort. As Matt has mentioned, there’s a canvas process and a certification for a reason but I will just tell you the distress that I’m hearing in my state from people who were at TCF and the way they were treated is deeply alarming. I hope you go and look at this. I hope you look at these affidavits and I hope you hear from the people that were there who feel like they were denied transparency and saw wrongdoing in Detroit. We should all be alarmed by this, no matter where you are on the political spectrum.

The affidavits, along with the lawsuits, were shared with the press—but don’t expect the MSM to read/report about them.

I cannot guarantee that these affidavits collected by the campaign, or the other ones to come,  will be substantial enough to prove that President Trump won the election. However,  the affidavits collected so far, and the ones the RNC is still collecting do indicate some funny business that went on with the 2020 presidential vote.  No matter who ends up winning the election, all of the claims must be investigated to ensure that the election and the person who takes the oath of office on inauguration day will be seen as legitimate. A clean election representing the will of the people is the foundation of our constitutional republic.