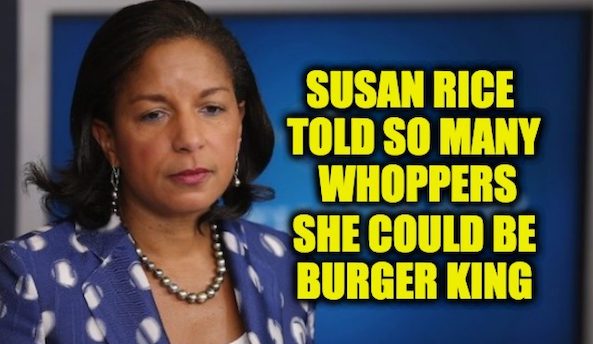 During his all-too-short time as director of national intelligence, Rick Grenell proved himself as someone not afraid to shine a harsh light on any DC swamp creatures… and that includes the power players and mucky-mucks. Thankfully he hasn’t stopped because as Joe Biden is kicking off what will effectively become Obama’s third term in office, he’s getting the band back together. Susan rice shadow president

Theories are already floating around as to who will really be running the show… because Quid Pro Joe is a lot of things, but ‘leadership material’ isn’t one of them. Hell, he doesn’t even seem to know his own mind half the time. He’s too busy licking his finger and testing the winds of political opinion.

With the Senate at such an even split, Kamala will be too busy keeping the plates spinning there to be running the show anywhere else.

But that leaves room for another blast from the past to step into the gap.

“I think you need to watch Susan Rice very closely,” Rick Grenell said on “Sunday Morning Futures.” “She will be the shadow president.”

Grenell called Biden’s pick “interesting” considering Rice has no experience in domestic policy but nonetheless will be “incredibly influential” under the new administration.

“I think the reality is, she’s going to be running foreign policy, domestic policy,” he said. “She’s probably extremely happy that Kamala Harris is going to be preoccupied with the Senate… and won’t have a lot of time to get into policy issues.”

…”We saw him raise his hand during the Democratic primary for some really radical ideas,” he said. “The progressives have clearly taken over him… And Susan Rice being right there at the White House to be the shadow president is probably exactly where she wants to be.”

Susan Rice is a serial liar. This is the same woman who ran from one Sunday show to another, trying to convince us all that Benghazi was NOT an orchestrated attack against an American target, but that it was actually a spontaneous mob uprising in response to incendiary, provocative, and lousy YouTube video. Note: for those who want to know more about that incident, read Ken Timmerman’s book “Deception: The Making of the YouTube Video Hillary and Obama Blamed for Benghazi. “

Rice is also someone who doesn’t believe in the constitution. In April 2017, the Daily Caller reported that Susan Rice ordered U.S. spy agencies to produce “detailed spreadsheets” of legal phone calls involving Donald Trump and his aides when he was running for president,

And let’s not forget that four years ago, on inauguration day, Rice wrote a memo to herself memorializing a meeting that occurred weeks earlier when she stressed that then-FBI Director James Comey assured Obama that they had run things “by the book.” Another lie.

Susan Rice will fit right in with the new leftist administration. She will continue to lie and continue to cover things up.