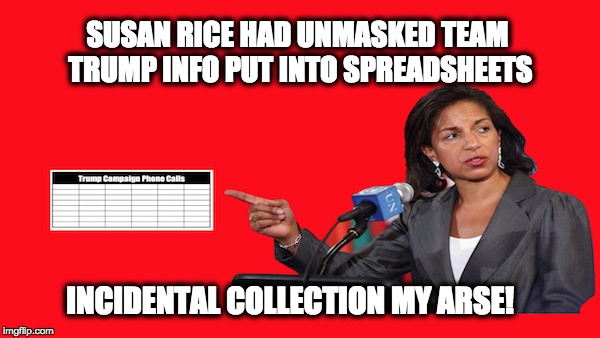 As the saying goes (or should go) incidental collection my butt!  Yesterday we learned that former Obama National Security Adviser Susan Rice was the high level intelligence who unmasked the names of the Trump team and other civilians for over a year before he because president. Today’s revelation is that she ordered the U.S. intelligence agencies to create detailed spread sheets about those legal team Trump phone calls.

“What was produced by the intelligence community at the request of Ms. Rice were detailed spreadsheets of intercepted phone calls with unmasked Trump associates in perfectly legal conversations with individuals,” diGenova told The Daily Caller News Foundation Investigative Group Monday.

“The overheard conversations involved no illegal activity by anybody of the Trump associates, or anyone they were speaking with,” diGenova said. “In short, the only apparent illegal activity was the unmasking of the people in the calls.”

Other knowledgeable official sources with direct knowledge and who requested anonymity confirmed to TheDCNF diGenova’s description of surveillance reports Rice ordered one year before the 2016 presidential election.

The demand of a spread sheet takes away any illusion that the unmasking was anything but an attempt to monitor the opposition. That is not just immoral but it is illegal. While it might be legal to collect the phone call information that involved foreign diplomats, that information is classified. The unmasking of the names for political purposes and leaking them to the press is illegal.

“That’s a felony, And you can get 10 years for that. It is a tremendous abuse of the system. We’re not supposed to be monitoring American citizens. Bigger than the crime, is the breach of public trust.”

Col. (Ret.) James Waurishuk, an NSC veteran and former deputy director for intelligence at the U.S. Central Command, told them that it had to go beyond Ms. Rice, “many hands had to be involved throughout the Obama administration to launch such a political spying program.”

Which raises the famous Howard Baker question “What did the President know and when did he know it?”

The fact that this information may have been used for political purposes is a major governmental crisis. It reeks of Watergate, only worse. More than a break-in of the opposition’s headquarters by a team of lousy burglars the Obama administration was spying on the Trump campaign, and tracking them with spread sheets. Certainly one piece of information was leaked, the General Flynn phone call with the Russian ambassador.

And for the rest of America it is an indication that the controls we were promised, that the names of private citizens would be kept secret when monitoring the phone calls of foreigners. Yes the question of team Trump’s ties to Russia should be answered.  But even more worrisome IMHO is did the Obama administration act like Russia by spying on their political opponents and/or other private citizens.

Along with getting to the bottom of the Obama administration’s spying on team Trump, congress needs to enact additional controls to insure that private American citizens’ names are not unmasked without a court order.