Susan Rice: I Am Not A Liar (I Wouldn’t Take a Check From Her Anyway) 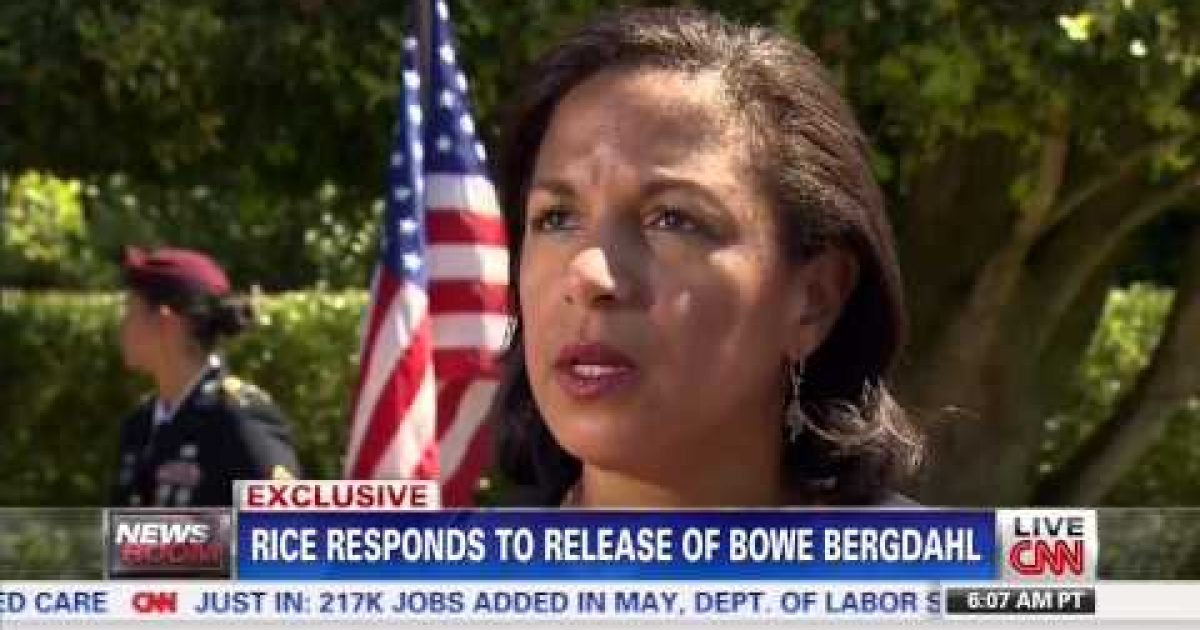 Jim Acosta, CNN’s White House correspondent, interviewed National Security Advisor Susan Rice about her praise of Army Sgt. Bowe Bergdahl as serving with “honor and distinction” even though his fellow soldiers said he was a deserter and possible collaborator with the enemy. “I was referring to was the fact that this was a young man who volunteered to serve his country in uniform at a time of war. That, in and of itself, is a very honorable thing.”

The administration has changed its story about its reasons for making the Bergdahl deal without the necessary 30 day notice to Congress, first he was too sick, that was followed by Congress was told and even if they weren’t Obama had added a signing statement when signing the legislation that he did not agree with the 30 day period, and finally the Administration said they were told by the Taliban if Congress leaked word about the deal they would kill Bergdahl. Rice seemed to agree with the third excuse while negating he second when she said, “We had reason to be concerned about his life. We also had reason to be concerned that the 30-day period that would normally be honored was too long.”

This is a young man whose circumstances we are still going to learn about. He is, as always Americans, innocent until proven guilty. He’s now being tried in the court of opinion after having gone through an enormously traumatic five years of captivity, his parents the same. I think what we need to care most about is his health and well-being and recovery. There’ll be an opportunity and the military has committed to review the circumstances of his capture. If there is a consequence that results from that, that will be delivered, but in the meantime, let’s remember this is a young man who volunteered to serve his country. He was taken as a prisoner of war. He suffered in captivity. He’s now trying to begin the process of recovery. Let’s let that happen and let’s know the facts including his side of the story and then we can make a judgment.

Acosta turned to the question of Rice’s bad track record on Sunday news shows, first blaming the Benghazi attacks on a YouTube video and her most recent comments about Sgt. Bergdahl.

Jim, I’m up front with the American people. I always do my best on behalf of my country and do my best with the facts, as we know them. In the case of Bowe Bergdahl, for me to condemn him without any opportunity for him to have the chance to tell his side of the story, without any due process that we accord any American, that would be inherently unfair. Similarly with Benghazi, as has been recounted on many occasions, I provided the best information that the U.S. Government had at the time. Parts of it turned out to be wrong. I regret that the information I was provided was wrong and that I delivered it to the American people. That doesn’t make me a liar. That makes me a public servant trying to say what we knew at the time and when I gave that information I caveated it and noted it was what we knew then and there, but it could well change.

Perhaps that doesn’t make her a liar, but I still wouldn’t take a check from our National Security Adviser unless it was guaranteed by a bank.  Watch the video of the interview below.