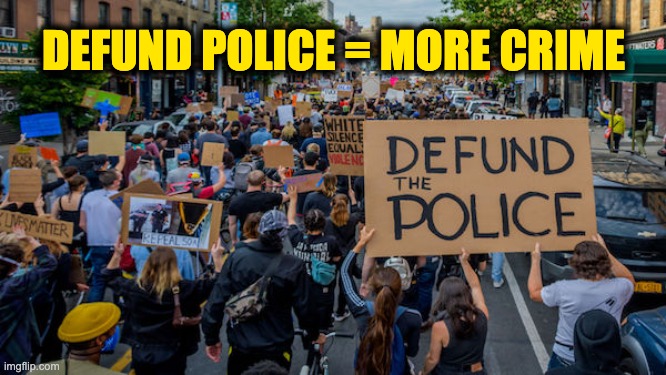 “Our police are not Superman. They have families like the rest of us. They cannot do their jobs when their hands are tied behind their backs.” – James Fotis, Police Officers Defense Coalition. surge in murders

Police advocates say the Defund the Police movement is responsible for the nearly 30 percent increase in murders in 2020, the most significant single-year jump since the FBI began recording crime statistics six decades ago.

The change in murders was widespread — a national phenomenon and not a regional one. Murder rose over 35 percent in cities with populations over 250,000 that reported full data.

Police advocates note that 372 police officers were killed in the line of duty in 2020 compared with 151 the previous year, a 146 percent increase.

“When police are in fear of being criminally charged for doing their jobs, they can’t do their jobs,” said James Fotis, president of the Police Officers Defense Coalition, a group that defends officers charged in the line of duty.

Fotis said that police are simply not responding to calls out of concern for their own safety in many large cities. “They are only responding to major crimes. We had a recent case in Florida where a 29-year old officer was shot and killed in a routine traffic stop. These officers don’t know what will happen to them when they go out on a call. Police are not Superman,” Fotis added. “They have families like the rest of us. They cannot do their jobs when their hands are tied behind their backs.”

Kyle Reyes, the national spokesman for Law Enforcement Today, said, “anybody with a head on their shoulders knew that if you remove funding from police, there is going to be a negative impact.”

Reyes explained that, unlike past murder spikes, last year’s crime wave was not isolated to major cities.

“Crime is spreading from these big cities that defunded their police into outlying communities and small towns and neighborhoods,” Reyes explained. “Because cities like Philadelphia, Los Angeles, and New York aren’t arresting criminals, these thugs can continue their crime sprees in the smaller communities. It’s a ripple effect.”

In addition, the Associated Press reports the mass protests and Defund Movement have taken their toll on officer morale. The rate of retirements at some departments rose 45% compared with the previous year, according to new research on nearly 200 law enforcement agencies conducted by the Washington-based Police Executive Research Forum and provided to The Associated Press. At the same time, hiring slowed by 5%, the group found.

“We have a very aggressive push to remove qualified immunity from law enforcement, and so all of the sudden you have officers that are facing losing their careers, their homes, their families, their retirements, for simply doing their job,” Reyes explained.  “A lot of these guys are looking at it thinking, ‘If I stay an extra two years, I might get a few extra points on my retirement. Forget it, it’s not worth the risk that I’m going to lose it all.’”

Both Flotis and Reyes said the only way to save our cities and communities is by getting involved and holding our elected officials accountable.

We need people to stop being the silent majority,” Reyes said. “As concerned patriotic Americans,  we’ve been silent as this Defund movement has spread. People have taken the Thin Blue Line stickers off their cars because they were afraid of being accused of being racist. It became cool to attack police.”

Flotis said if we don’t change leadership at the state and local levels, crime will only worsen. “Being a police officer is not a job anyone wants anymore.”

Americans for Limited Government President Richard Manning said woke activists are to blame for violence and the civil unrest across the country. “This is exactly what they wanted. The Left wants to destroy America.  We, as law-abiding Americans, can do two things, first provide for our own protection if the government can’t or won’t do it. That’s already happening, as evidenced by the record number of Americans who purchased firearms for the first time last year.  And second, we must elect leaders who will restore funding to our law enforcement officers.”