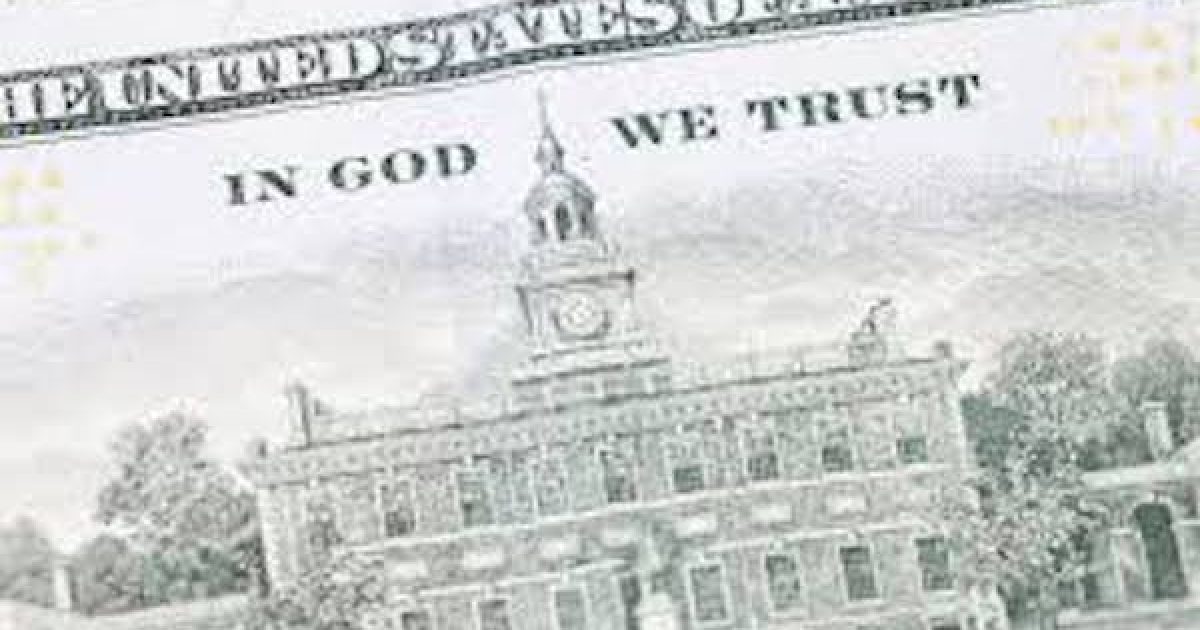 The Supreme Court rejected a suit brought by atheists to remove “In God We Trust,” the national motto, from all U.S. coins and currency.

Michael Newdow, the same activist attorney who tried to remove “under God” from the Pledge of Allegiance, lost his case, arguing Congress’ mandate to inscribe “In God, We Trust” on currency was a government endorsement of religion and a violation of the First Amendment.

Newdow argued in his petition to the Supreme Court that because his clients are all atheist individuals or atheist groups, the government violated their “sincere religious belief” that there is no God and turned them into “political outsiders” by placing the phrase “In God We Trust” on their money.

If it really offends, they should send me their money, I will take their money off their hands so they don’t have to look at it anymore.

Atheists and liberals love to talk about what they claim is a First Amendment separation of church and state. The first amendment was never meant to stop religion from influencing government. The founding fathers wanted to ensure that the government wouldn’t have undue influence/pressure on religion.

Let us with caution indulge the supposition that morality can be maintained without religion. Whatever may be conceded to the influence of refined education on minds of peculiar structure, reason and experience both forbid us to expect that national morality can prevail in exclusion of religious principle. George Washinton’s Farewell Address, 1796

And if the atheists are offended, too bad. As Ed Brodow wrote in an earlier Lid post:

In a democracy, there can be no right not to be offended. If anyone can claim that another person’s speech is offensive and ought to be prohibited, there is no limit to the restrictions that can be placed on free expression. As the late author, Christopher Hitchens said, “Freedom of speech must include the license to offend.” Wherever it is sanctioned, the “right” not to be offended invalidates the Bill of Rights and the Constitution. The difference between the U.S. and Cuba has to do with the right to say and think whatever you like even if someone is offended by it. “What protects people’s rights to say things I find objectionable,” Jodie Ginsburg wrote in The Guardian, “is precisely what protects my right to object.”

“Nobody has the right to not be offended,” said Salman Rushdie, the author targeted for murder by Islamic authorities who were offended by his novels. “That right doesn’t exist in any declaration I have ever read. If you are offended, it is your problem, and frankly, lots of things offend lots of people.”

In a well-publicized media interview, Canadian psychology professor Jordan B. Peterson was asked why his right to freedom of speech should take priority over a person’s right not to be offended. “Because,” he answered, “in order to be able to think, you have to risk being offensive.” Then he added, “You’re certainly willing to risk offending me in the pursuit of truth.” The interviewer was stopped dead in her tracks by Peterson’s astute reply.

I am happy the Supreme Court told the atheists that the motto of the United States “In God We Trust,” will be staying on our money.  And In return,  I promise I will never put handcuffs on an atheist and drag them to Synagogue to hear us pray to God all day.