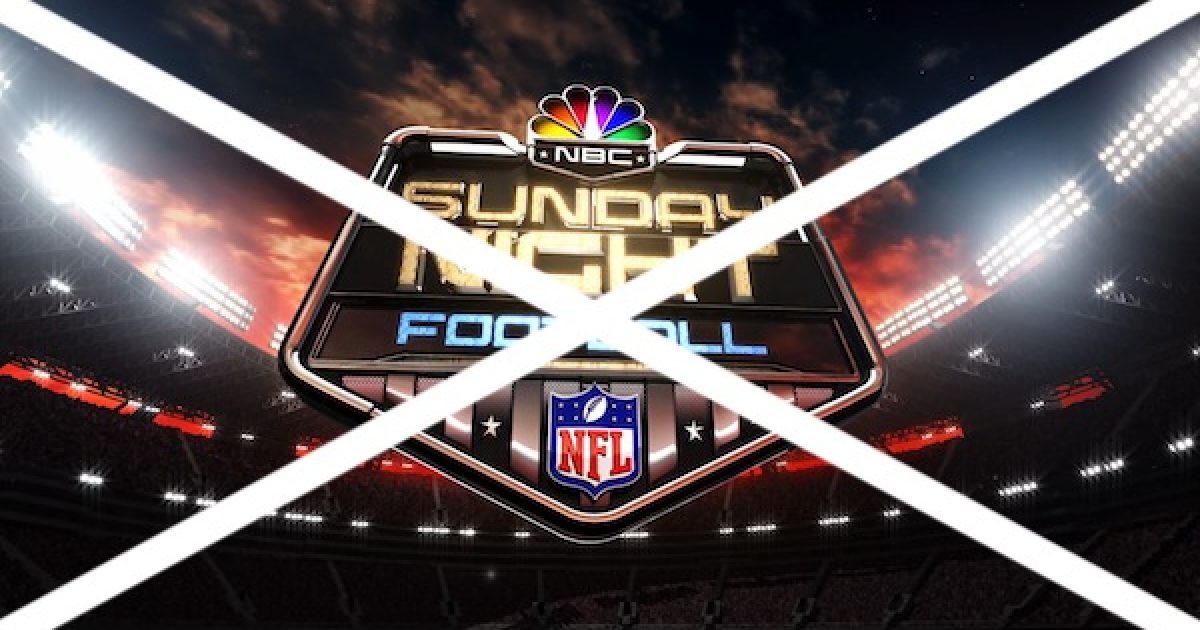 Sunday Night Football has been canceled for the end of the season…or will it be gone for a longer time?

Late in the 2016 season, the NFL underwent a seismic shift in their culture when Colin Kaepernick was allowed to disrespect the National Anthem with his political antics.  Kaepernick’s preferred method of disrespecting the song was to kneel, but his misguided temper tantrum spread throughout the league where a bevy of bratty, overpaid players found themselves doing all manner of things during the playing of the Star Spangled Banner.  Stretching, chit-chatting with other players, and sitting on the bench were all behaviors observed by the American people who were absolutely outraged.

As this nonsense continued into the 2017 season, (a slate of contests that Colin Kaepernick was deemed too poor a player to participate in), fans turned away from the beleaguered league in droves.  Ratings plummeted.  Television advertisers jumped ship by the dozen.  The NFL became the laughing stock of American sports.

Now, as the league continues to fail miserably in the eyes of the We The People, there are adjustments to be made in order to maintain some semblance of profitability.  The latest desperate ploy by the NFL to stop the bleeding comes as the league announced a change to their upcoming holiday schedule and the cancelation of Sunday Night Football.

“After an entire season spent battling anthem protests, collapsing ratings, and other political controversy; on the final scheduled primetime game of the year, the NFL has decided to say: No Mas.

“The NFL has decided to cancel the Week 17 edition of Sunday Night Football.

“While the league says that their decision to cancel the game is based on being “fair” to the fans. By ensuring that all games with playoff implications are played at the same time. There are other, more substantive reasons for the NFL to reschedule.

“To put in perspective how bad the ratings have been for NBC’s SNF, the Christmas Eve edition of SNF, tied a 6-year low in the ratings. The week before that, saw a 35% percent ratings drop from the previous year.”

This horrific downward spiral will have massive implications moving forward as well, with Americans realizing just how little they cared for the NFL in the first place now that they’ve stepped away.

Between the exorbitant salaries of the players, overpriced tickets, television monopolization of the cable companies, and the wholesale mismanagement of the entire league, there is little hope that America will come running back to the NFL once these pedantic protests fizzle out in a year or two.