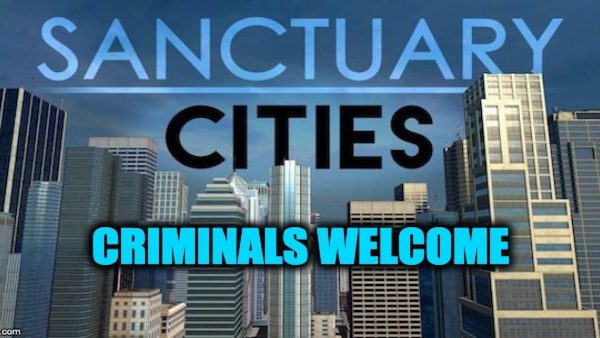 A new Rasmussen survey released Thursday reveals slightly more support among voters for a law that would allow victims of crimes committed by illegal immigrants living in so-called sanctuary cities while showing much larger opposition to such sanctuaries. sue sanctuary cities

The report said this new survey shows very little change over similar polling over the past three years. This time around, 49 percent of likely voters say they are opposed to living in a sanctuary city, while 36 percent of survey respondents favor living in such a community.

When it comes to holding such communities liable for crimes committed by illegal aliens living there, the spread was 44 percent in favor of such a law, and 40 percent are opposed. Sixteen percent aren’t certain.

President Donald Trump expressed support for such legislation during his State of the Union address earlier in the month.

The political breakdown is not surprising. Sixty percent of identified Republicans favor Trump’s proposal while only 31 percent of Democrats do. Forty-five percent of independents also support such a law.

Rasmussen’s survey found some other things. According to the latest weekly Immigration Index, 40 percent of voters think the government is not doing enough to reduce illegal border crossings or “visitor overstays.” By contrast, 35 percent of the respondents think too much is being done and 18 percent believe the level of action is “about right.”

Illegal immigration is a sensitive subject. An opinion piece in The Hill Thursday alleges that a House bill called the “New Way Forward Act” now in the Subcommittee on Immigration and Citizenship would use tax dollars “to import crime.” The measure, H.R. 5383 would, according to author Nolan Rappaport, “would allow dangerous criminals to remain in the United States, and it would use tax dollars to bring deported criminals back.”

“It is…the most ill-advised immigration legislation I have ever seen,” Rappaport stated.

There has been considerable debate about sanctuary cities since the 2015 slaying of Kate Steinle on a San Francisco pier. She was struck by a bullet fired by Jose Inez Garcia-Zarate, a convicted felon, and recidivist illegal immigrant. He was charged in the case, but was found not guilty of first- and second-degree murder, involuntary manslaughter, and lesser crimes, and a San Francisco appeals court overturned his conviction for being a felon in possession of a firearm.

Garcia-Zarate said he found the gun, which had been stolen from a federal law enforcement officer, wrapped in a T-shirt. He claimed the gun discharged when he picked it up.

Immigration reform will likely be a component of this year’s federal elections, along with gun control, while Democrats scamper to avoid talking about the economy, which has been booming under President Trump.