State Rep. Calls for Illinois to Stop Teaching History-Curriculum Leads To ‘A Racist Society’ (NOT Satire) 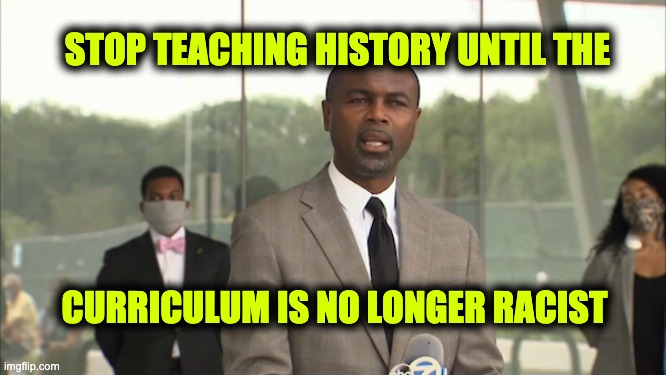 “Those who cannot remember the past are condemned to repeat it.”

Most revolutionaries wait until a government is toppled before they try to erase the national history of the previous government. Do these ‘educators’ think that battle is already won? Illinois State Rep. LaShawn K. Ford is calling for the Illinois State Board of Education to stop teaching history until the history curriculum at schools statewide can be changed.  Per Ford, the current curriculum leads to white privilege and a racist society (and kids doing history essays at the last minute).

Activists are leveraging the nation’s revulsion to bigotry to force an agenda down our throats. They have a straightforward and ruthless system for forcing that change: find something they don’t like, call it ‘racist’ and demand it be removed.

Granted, it was four decades ago, but when I took history in high school, we learned of great Americans of all races. In fact, I still remember that the first man killed in the Boston Massacre was Crispus Attucks, who was of African American descent.

Fredrick Douglas, Rev. Martin Luther King Jr., Harriet Tubman, Madam C. J. Walker,  George Washington Carver, and many, many others were not remembered for their race and sex primarily — there are plenty of men and women of their peers whose names are lost to history — but they are taught in history classes because the things they DID that changed the world around them.

Activists are leveraging the nation’s revulsion to bigotry to force an agenda down our throats. They have a very simple and ruthless system for forcing that change: find something they don’t like, call it ‘racist’ and demand it be removed.

Just last week we saw that tactic employed by Rep. Alexandria Occasional Cortex, trying to claim that a priest who intentionally risked — and eventually gave — his life in service of an isolated Hawaiian leper colony is the embodiment of racism and colonialism… she insisted that a Hawaiian political leader (female) would be a far more appropriate representation.

Setting aside for the moment, what a woman of Puerto Rican heritage from the NYC suburbs does or doesn’t know about what’s ‘best’ for the people of Hawaii— this is precisely the game that ‘intersectional’ politics plays. Set one group against another with the ‘victim group’ always being the sympathetic character in their story– facts be damned.

Maybe the woke culture doesn’t like the history curriculum because it also includes some stories of White guys doing things that might be viewed as decent, and world-changing.

That just won’t do. They want to stop teaching history until such time as they can wipe away those stories and replace them with stories as dishonest and historically disreputable as the New York Times’ discredited 1619 Project.

Leaders in education, politics and other areas gathered in suburban Evanston Sunday to ask that the Illinois State Board of Education change the history curriculum at schools statewide, and temporarily halt instruction until an alternative is decided upon.

At a news conference, State Rep. LaShawn K. Ford said current history teachings lead to a racist society and overlook the contributions of women and minorities.

Before the event Sunday, Rep. Ford’s office distributed a news release “Rep. Ford Today in Evanston to Call for the Abolishment of History Classes in Illinois Schools,” in which Ford asked the ISBOE and school districts to immediately remove history curriculum and books that “unfairly communicate” history “until a suitable alternative is developed.”

Rep. Ford Today in Evanston to Call for the Abolishment of History Classes in Illinois Schools

Concerned that current school history teaching leads to white privilege and a racist society, state Rep. La Shawn K. Ford, D-Chicago, will join local leaders today at noon at the Robert Crown Center in Evanston to call on the state to stop its current history teaching practices until appropriate alternatives are developed.

“When it comes to teaching history in Illinois, we need to end the miseducation of Illinoisans,” Ford said. “I’m calling on the Illinois State Board of Education and local school districts to take immediate action by removing current history books and curriculum practices that unfairly communicate our history. Until a suitable alternative is developed, we should instead devote greater attention toward civics and ensuring students understand our democratic processes and how they can be involved. I’m also alarmed that people continue to display symbols of hate, such as the recent display of the Confederate flag in Evanston.”

Attendees at Sunday’s press conference will discuss how current history teaching practices overlook the contributions by Women and members of the Black, Jewish, LGBTQ communities and other groups. These individuals are pushing for an immediate change in history changing practice starting this school year.

“The miseducation of our children must stop,” said Meleika Gardner of We Will. “It is urgent that it comes to an end as we witness our current climate become more hostile. Miseducation has fed and continues to feed systemic racism for generations. If Black History continues to be devalued and taught incorrectly, then it will call for further action.”

Evanston Mayor Steve Hagerty notes “As Mayor, I am not comfortable speaking on education, curriculum, and whether history lessons should be suspended. This is not my area. Personally, I support House Bill 4954 because I am interested in learning more and believe the history of Black people should be taught to all children and include all groups, Women, LatinX, and Native Indians who helped to build America.”

Their emphasis just happens to be centered on all the preferred groups of the Intersectional political coalition the Left has been trying to cobble together for a hard turn toward socialism.

Forget the fact that the significant numerical majority of Americans in history do NOT fit neatly into one of their interest groups. And it so happens that, by definition, they played important roles in our development as a nation. That is how history works.

There have been men and women of greatness, across all manner of ethnic, socioeconomic, and cultural backgrounds. The point is, they are usually remembered for their DEEDS, not their skin color or gender.