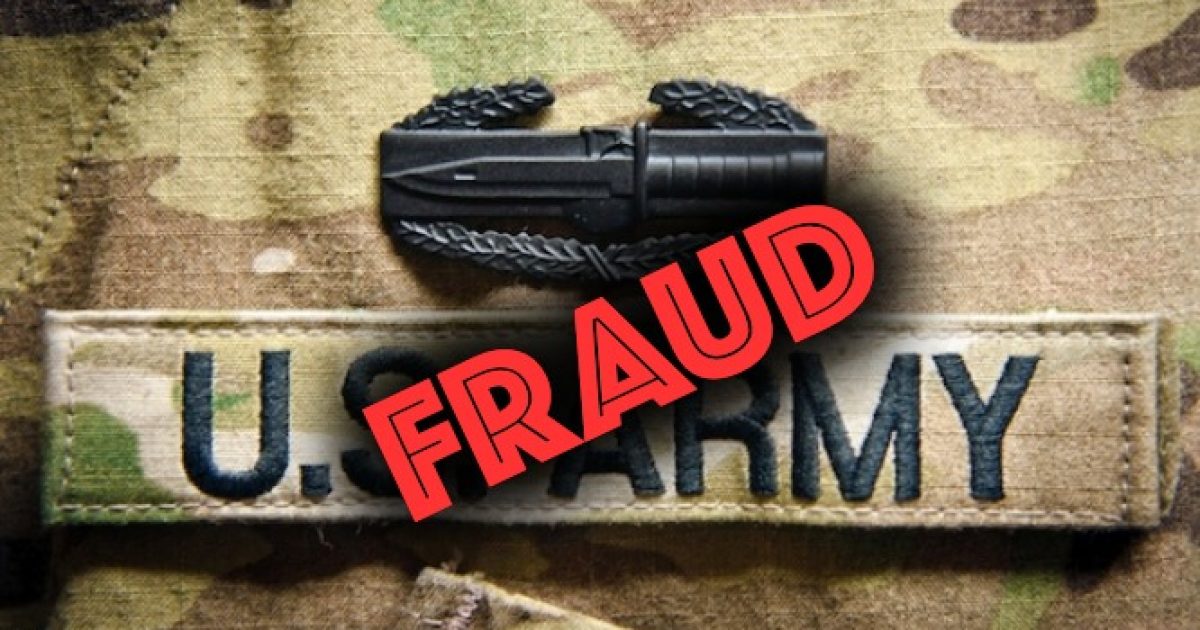 It’s called stolen valor, but to be perfectly honest it should be called a special kind of coward.

NYPD officer Jay Park is a US Army Veteran…a real one. While working a detail at a New York grocery store on Memorial Day, he ran across a stolen valor case – a man who was posing as a decorated service member. The officer took care of what he described as a “highly decorated douche bag.”

The imposter was wearing an Air Force patch on an Army uniform. He also had special ops patches haphazardly placed, and award ribbons on a field jacket. Definitely a stolen valor case. Though Officer Park’s cell phone video has been removed from YouTube, Blue Lives Matter captured the conversation for us all:

The officer identified himself as an Army veteran and asked him where he served.

“I served in Iraq,” the man stuttered. “The first Gulf War…the first one. Desert Storm.”

Officer Parks noted the impostor’s Purple Heart, and the man then told him about the significance behind his other ribbons and medals.

He told the officer he later served in “the reserves,” and launched into a history about the previous styles of uniforms he had supposedly been issued.

He also claimed that he was a commissioned Air Force officer before he abruptly offered to show his identification.

Officer Park told him he didn’t need to see his ID, but the man suddenly flashed what appeared to be a state-issued identification card.

“Let me ask you something,” Officer Park interrupted. “How many people came to you today and said, ‘Thanks for your service?’”

“Actually,” the impostor responded with a smile, “I came from a parade, so I got a few.”

He explained that he had been at the Memorial Day parade in Manhattan just prior to coming to the store.

“You sure you didn’t get burned over there?” Officer Park asked him.

“Yeah,” the officer replied. “For wearing your fake s–t?”

The impostor laughed nervously, but denied the officer’s allegation.

Officer Park then asked the man if he had ever heard of stolen valor.

“Yes, I have heard of a stolen valor,” he responded. “Stolen valor is when you use somebody’s else’s, um, things.”

Officer Park pointed out that such an act would be a federal crime.

“Yes. It is a federal crime,” said the man, who was no longer smiling and laughing.

He said he did not have his “paperwork” with him, then offered to remove his military attire.

“Yes. Go ahead,” Officer Park agreed, as the man removed his Purple Heart.

The officer then instructed him to remove the top portion of the uniform altogether.

“You know how disrespectful this is? On Memorial Day?” he asked the impostor. “Take off the dog tags, too. You never served, obviously.”

The man briefly and weakly argued that he has a “veteran’s card,” then quickly scurried away.

“Pay for your s–t, and get out of the store,” Officer Park firmly ordered.

A Stolen Valor case is a federal crime, but only the highest levels of imposters are ever prosecuted. So Officer Park’s method was a good one. What is most unfortunate is that medals, patches, ribbons, and uniforms are often readily available at thrift stores and pawn shops. I once thanked a man for his service who was wearing a USAF uniform with a patch …he said he wasn’t military. I asked him where he got the uniform, and he said, “thrift store.” I advised him that it probably was not a good idea to be running around wearing that uniform. He thought it was “cool” and walked away. It’s too easy to deceive, too easy to obtain awards that do not belong to the person.

The people who serve in the military are heroes. They aren’t looking for glory, they just want to do their job to protect America and our freedoms. In doing so, they recognize they’re putting their lives and limbs on the line.

People who fake having served at, or like Senator Blumenthal say they served in combat but didn’t are the total opposite of the people in the military.  Unlike the heroes who earn glory by volunteering to put their lives and limbs on the line but don’t want, the valor thieves are looking for glory by sitting on their backsides and claiming it for themselves.

Perhaps stolen valor is a correct term, as they are cowards who attempt to elbow in on the esteem of the heroes who so bravely earned it, whether they served in combat or not.

Parts of this post were seen initially at ConservativeFiringLine