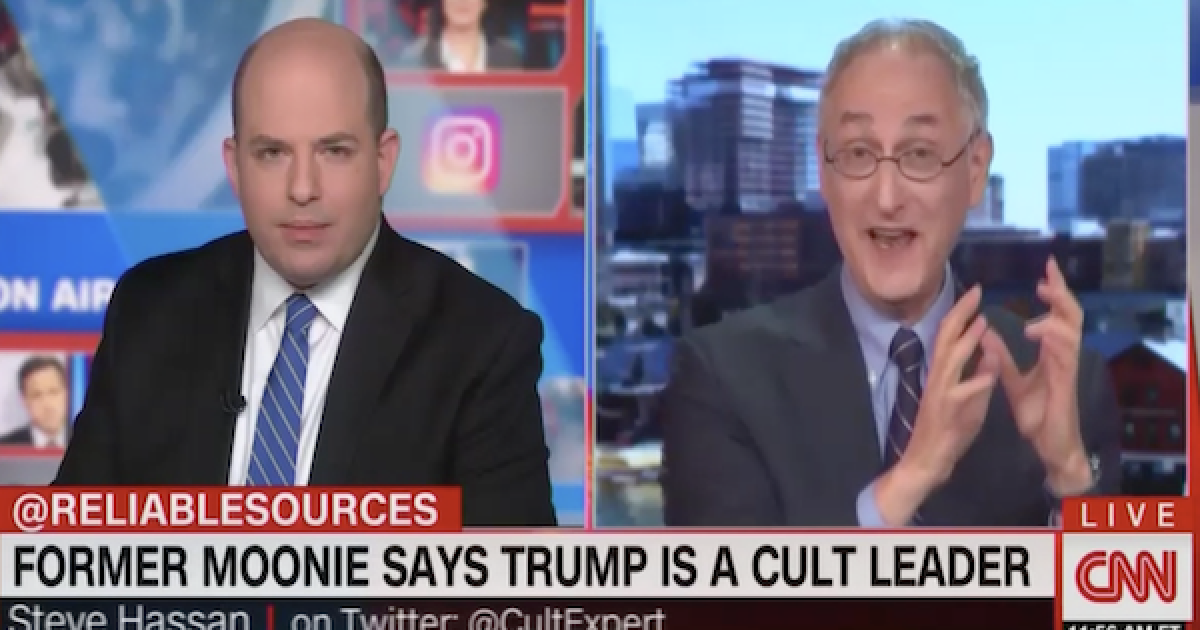 This isn’t political—it’s NUTS CNN’s Brian Stelter on Sunday hosted with an “expert” who believes that supporters of President Trump are in a “destructive cult” and are the victims of “mind control.” Stelter interviewed a cult expert, Steven Hassan whose psychological pedigree comes from the fact that he’s a former “Moonie cult leader. ”  Hassan suggested instead of watching football and stuffing oneself with turkey and carbohydrate-loaded side dishes, thanksgiving gatherings would be a great time to stage an intervention to take “the first step of deprogramming” Trump voters.

No Thanksgiving is a great time to watch football and stuff oneself with turkey and carbohydrate-loaded side dishes. However, this paranoid former cult leader thinks we need an intervention because:

“I define a destructive cult as an authoritarian pyramid-structured group with someone at the top who claims to have total power and total wisdom that uses the deception and control of behavior, information, thoughts, and emotions to make people loyal and dependent and obedient followers

So, for me, the issue between an ethical healthy cult, where you’re free to think and free to leave, versus a destructive cult … I’m referring to Trump’s organization and followership as a destructive cult, where people are being fed propaganda and they’re not being encouraged to think for themselves. They’re not being encouraged to really explore and look at the details and arrive at their own conclusion.

Much of what they’re hearing is emotionally driven, loaded words, thought-stopping and thought-terminating-type clichés like ‘fake news’ or ‘build the wall’ or ‘Make America Great Again.’”

Trump didn’t invent calling the press fake news. Conservatives have been complaining about the MSM for years. During the 2012 primary race, Newt Gingrich’s poll numbers spiked up when he slammed the press. In 2006 Congress voted to build a wall and Democrats like Hillary Clinton, Chuck Schumer, and Joe Biden.  Former President Bubba Clinton used, “make America Great Again”

If anything, the liberals who are obstructing everything that Trump is trying to do are the victims of some cult-like mind control.

Former Moonie Steven Hassan was on the Stelter show to promote his new book “The Cult of Trump.” According to the Amazon description:

In The Cult of Trump, mind-control and licensed mental health expert Steven Hassan draws parallels between our current president and people like Jim Jones, David Koresh, Ron Hubbard and Sun Myung Moon, arguing that this presidency is in many ways like a destructive cult. He specifically details the ways in which people are influenced through an array of social psychology methods and how they become fiercely loyal and obedient. Hassan was a former “Moonie” himself, and he draws on his forty years of personal and professional experience studying hypnosis and destructive cults, working as a deprogrammer, and a strategic communications interventionist. He emphasizes why it’s crucial that we recognize ways to identify and protect ourselves and our loved ones.

Really? Does he think that Trump is like Jim Jones and he has mystical cult leader properties that eventually will make his supporters drink poison kool-aid? Sorry Steven Hassan, but I am not drinking anything unless it is spiked with a perfectly aged single malt whiskey. If Trump is a cult leader! Maybe he should use his mystical powers on the Bug-eyed Bullsh*tting Barrister of Burbank, Adam Schiff.

Hassan is another establishment type trying to tell us that people are either crazy or hypnotized if we support someone who doesn’t bow down to the political establishment. Trump doesn’t use mind control, he uses marketing, Perhaps because of his paranoia over his years as a Moonie, Hassan can’t comprehend the difference.

The paranoia driving Hassan reminds me of a secretary I worked with for a bit during my time at an advertising agency. She had maintenance remove all of the fluorescent lights above and near her desk because they transmitted evil waves that were trying to control her mind. Eventually, she was laid off so she could become a full-time cat lady.

Based on his suggestion that Trump is a cult leader, I would suggest that it’s time for Steven Hassan to retire and start raising fifty cats. It better suits his paranoid mind.

And it’s just like CNN and especially Brian Stelter to invite a paranoid former Moonie on his show to bloviate about President Trump. Hey, Brian answer this. If Trump is so good at mind control, how are you able to lie about him all the time?

Below is a video of the Stelter/Hassan interview courtesy of MRC TV: