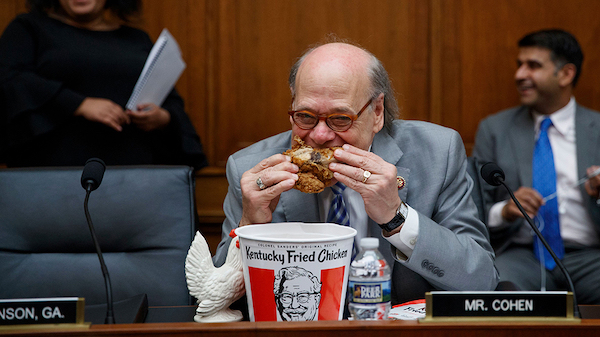 While appearing on fake news CNN, Rep. Steve Cohen, D-Tenn., suggested — without any evidence whatsoever — that white male members of the military are seditious conspirators against Joe Biden because many in the military supported Trump.   steve cohen attacked the military

“The [National] Guard is 90 some-odd percent male, and only about 20 percent of white males voted for Biden … there are probably not more than 25% of the people there protecting us that voted for Biden,” he alleged.

Translation: White male military members who voted for Trump should be profiled

.@RepCohen on his concerns w/ the National Guard securing the Inauguration: “The [National] Guard is 90 some-odd percent male; and only about 20 percent of white males voted for Biden … there are probably not more than 25% of the people there protecting us that voted for Biden” pic.twitter.com/ofQfLuCw8I

“The other 75% are in the class that would be the large class of folks who might want to do something. And there were military people and police who took oaths to defend the Constitution and to protect and defend who didn’t do it who were in the insurrection. So it does concern me,” he said.

Cohen added that people on social media had referenced and reminded him of the assassination of former Egyptian President Anwar Sadat in 1981.

Host Jim Sciutto pushed back on his claims, saying that all people who voted for President Trump don’t pose a threat, and asked if he’s seen evidence of an insider attack. Cohen said he had not seen that evidence.

Got that?  Cohen has no evidence, but he’s willing to smear every member of the military just because they may have voted for Trump.

Response to Cohen’s smear was fierce and justified:

Dem Congressman believes some of our troops are a threat merely because they’re white & male.

Our military members dedicate their lives to serving & protecting our country. Anyone who questions their ability to do so based on ignorant assumptions such as these should be ashamed. https://t.co/Ocfqgh5ulr

*Chairman of the Subcommittee on the Constitution, Civil Rights, and Civil Liberties* just stating w/out a tiny shred of evidence that our guardsmen cld be a threat to us since some of them presumably voting for the Republican ticket.

There is nothing more destructive than a US rep suggesting the only American soldiers that can be trusted are those politically aligned with your party.

They all voluntarily signed up to serve this country, not an individual.

Applying political litmus tests to military personnel is an awful insult to people who serve their country. @TheDemocrats should drop this concept immediately.
This is not “unity.”

Democrats don’t care about “unity.” What they want is submission. And if you dare disagree with them, they want you profiled, de-programmed and cleansed. Just like good totalitarians. Hey, it worked so well for Mao, Castro, and Stalin, right?

Army Secretary Ryan McCarthy told the Associated Press that he and other officials have not seen any evidence of threats and the vetting process hasn’t led to any red flags.

”We’re continually going through the process and taking second, third looks at every one of the individuals assigned to this operation,” McCarthy said.

Cohen’s comments were met with swift condemnation on social media, with some saying him “questioning the loyalty” of the military is irresponsible, “reckless,” and “stupid.”

That’s because it IS irresponsible, reckless and stupid.  But we’ve come to expect nothing less from Cohen and the Democrats.