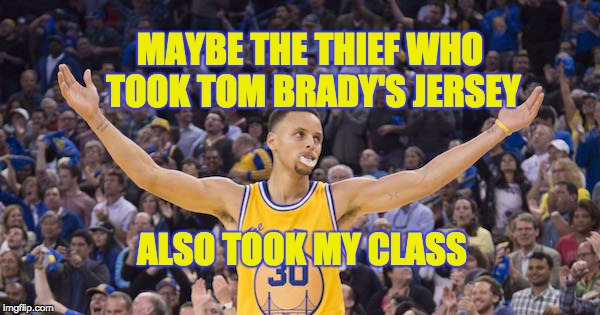 Stephen Curry, star point guard of the San Francisco Warriors had a reputation of being a real classy guy (the operative term being “had’).

I like Steph for all of the reasons I usually gravitate toward a professional athlete; he was work-man-like in his demeanor, he treated his opponents with respect, he was soft spoken but confident, he was respectful without being a pushover, and he excelled, even dominated, at the highest levels of his profession. What made Curry even more attractive for a sports fan like me was that he openly professed his Christianity. Steph Curry, like his father Dell, has always been a responsible and gracious man of character whose personality offered a winsome perspective on the faith we share…

Sadly, Curry may have undone much of his work with a few simple, and callous words.

Recently, the CEO of Under Armour, Kevin Plank, was heard praising President Trump as a real “asset” for America’s business community.

“To have such a pro-business president is something that is a real asset for the country. People can really grab that opportunity,” Plank told CNBC’s Scott Wapner.

Plank also mentioned his meeting with President Donald Trump to discuss jobs in U.S. Plank described Trump as “highly passionate” and a pro-business man who is a “real asset” for U.S. companies.

Last month, Plank said in a speech that “We should be bringing jobs back, not just to America, but tightening supply chains all over the world. We have the ability to do it better. It’s time for all of us to make an investment.”

The comments have sparked the expected rage from the militant left who believe that anyone who supports Donald Trump is an evil monster.

However, it was the response from Under Armour’s most important celebrity talent, Stephen Curry, that was the real cause for surprise and concern. On Thursday, Curry spent much of the morning criticizing Plank for his support of Donald Trump and hurling rude insults at the President himself.

When asked what he thought about Plank’s comments on Trump being an “asset,” Curry responded by saying “I agree with that description, if you remove the ‘et’” from asset.”

Ha-ha-ha! You get it? An asset minus the “et.” Oh boy, that Stephen Curry is a real card, he shouldn’t have gone into basketball, the guy should be doing standup.

Curry then said that he had spent most of Wednesday on the phone speaking with executives at Under Armour trying to understand why Plank would openly support President Trump, and that Plank had reassured him he was only speaking from a “business perspective,” and that he did not necessarily agree with anything else that President Trump had ever said or done.

Whatever was said, Curry seems to be placated about the company’s politics for now…

Curry, who has a contract with Under Armour that runs through 2024, said Plank working with Trump isn’t a deal-breaker for him.. He is more concerned about Under Armour adopting Trump’s values, he said.

“It’s a fine line but it’s about how we’re operating,” Curry said, “how inclusive we are, what we stand for. He’s the President. There are going to be people that are tied to them. But are we promoting change? Are we doing things that are going to look out for everybody? And not being so self-serving that it’s only about making money, selling shoes, doing this and that. That’s not the priority. It’s about changing lives. I think we can continue to do that.”

“I feel like if you know who I am, you know what I stand for, and I can live with that,” Curry said. “I feel when you see my name, when you see people wearing my stuff, when you see anybody attached to me, that they share that same passion for people that I do. And that’s what I’ve been really serious about using this platform to share. I don’t get in people’s faces and out in the streets with a bullhorn doing it that way. But every opportunity I have to show love, to show respect, to show just that positivity, I feel like that’s my job and that’s what I stand for.”

As much time as Curry spends speaking about being loving, being respectful, and showing positivity, it’s amazing how little of that he actually expressed in this interview.

Let me be clear, I have no problem with Curry opposing President Trump’s politics. However, his comments on why he was so upset that Under Armour’s CEO said something supportive of the President expose the reality of Curry’s thinking. In Curry’s mind, anyone who expresses support for President Trump or his policies must immediately be “unloving,” “disrespectful,” and “negative.” While Curry may wrap his distaste for the President in a kinder veneer, the truth is that his thoughts on the subject of Trump are the same as even the most virulent and violent liberal – anyone who stands in Trump’s camp must be a horrible person.

Stephen Curry your decline from classy to intolerance of other opinions is reminiscent of a song from the musical Chicago called “What Became of Class:”