WRONG!!! The Statue Of Liberty Does NOT Stand For Open Borders 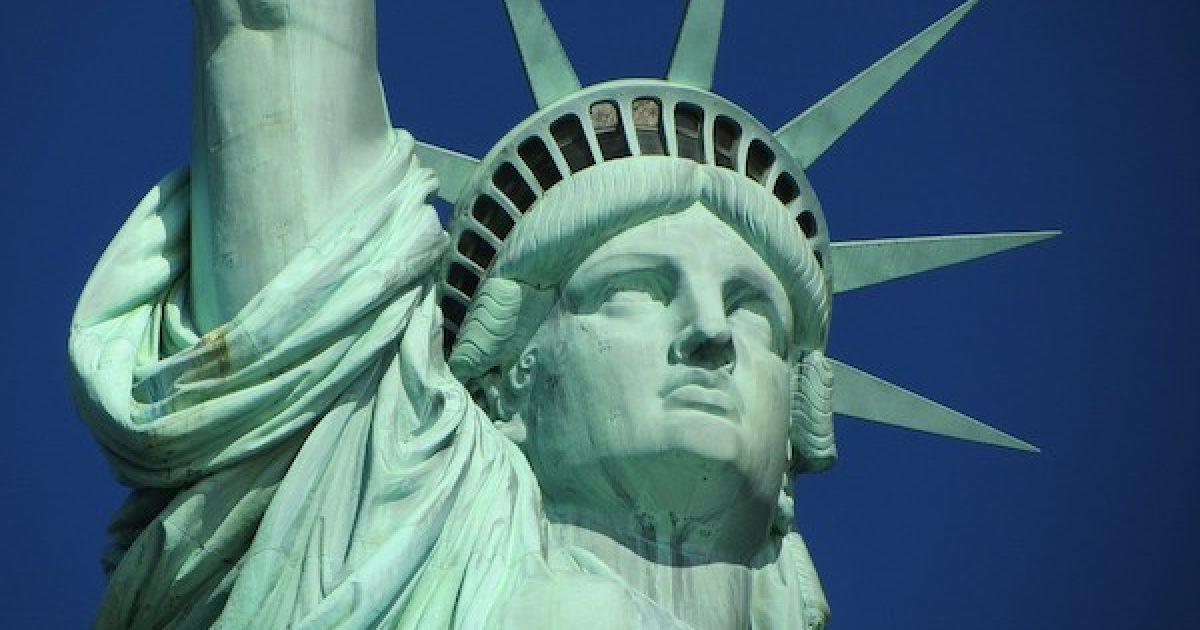 Facebook Twitter Flipboard
Once again liberals are claiming that the airy poem — “give me your tired, your poor, Your huddled masses yearning to breathe free” — on the Statue of Liberty means that America is all about open borders and untrammeled immigration. But the truth is, that cute little poem has always been practically meaningless where it comes to our border policies.

The poem was initially only tangentially connected to the famed Statue of Liberty. Emma Lazarus, who wrote “The New Colossus” in 1883, donated the poem to an auction of art and literary works conducted by the Art Loan Fund Exhibition in Aid of the Bartholdi Pedestal Fund to raise cash for the Statue of Liberty. It was then forgotten for a time.

Not like the brazen giant of Greek fame,
With conquering limbs astride from land to land;
Here at our sea-washed, sunset gates shall stand
A mighty woman with a torch, whose flame
Is the imprisoned lightning, and her name
MOTHER OF EXILES. From her beacon-hand
Glows world-wide welcome; her mild eyes command
The air-bridged harbor that twin cities frame.

“Keep, ancient lands, your storied pomp!” cries she
With silent lips. “Give me your tired, your poor,
Your huddled masses yearning to breathe free,
The wretched refuse of your teeming shore.
Send these, the homeless, tempest-tost to me,
I lift my lamp beside the golden door!”

While the poem was written during the time that the Statue was being planned and erected, in reality, it had nothing to do with the Statue of Liberty — which was dedicated in 1886. It wasn’t even officially published until 1901 when both The New York Times and the New York World printed the ode in their pages.

But, after its publication, one of Lazarus’ friends began a campaign to get the thing recognized. The efforts bore fruit when a plaque bearing the words was finally added to Liberty’s pedestal in 1903.

So, that is where the poem came from. As you can see, it only tangentially had anything to do with the statue and had nothing at all to do with its erection or its dedication. And it didn’t even appear on the base for 17 years after the great statue was raised.

While many today want to pretend that the Statue of Liberty is our national monument to immigrants, the truth is the statue itself has nothing whatever to do with immigration. It was initially conceived by French abolitionist Edouard de Laboulaye as a celebration of President Abraham Lincoln’s emancipation of the slaves, the end of the Civil War, and the abolition of the institution of slavery. De Laboulaye hired sculptor Frédéric Auguste Bartholdi to begin planning what would become the Statue of Liberty.

Indeed, since it was a celebration of the end of slavery, African Americans have more right to claim the Statue of Liberty than immigrants do.

There was nothing about welcoming anyone, nothing about borders, or poor people, or bringing any “huddled masses” anywhere. It is a more straightforward message about liberty and liberty has nothing, in particular, to do with immigration. It has to do with the power to act with autonomy and self-determination. But even more to the point it is about creating a government that allows its citizens that liberty. The original purpose of the statue was to celebrate American republicanism (not the party, the concept), not its immigration policy.

But, that aside, the real point here is, that America had many and varied immigration policies before the statue was conceived, while it was being built, and after it was dedicated. At no point in time did the statue stand for or act as a guide for our immigration policies nor does it represent any sort of immigration “first principle” or any previous “American tradition” where it concerns immigration.

There have been many times that America has created specific limits or even outright temporary bans on groups of foreign émigrés.

In 1882, for instance (and remember, this was before the statue was built), President Chester Alan Arthur signed the Chinese Exclusion Act. This legislation banned “skilled and unskilled laborers and Chinese employed in mining,” and it kept them from entering the U.S. for 10 years. The law even puts restrictions on Chinese people who were already here, forcing them to get work permits and other requirements. It was extended another ten years in 1892, but the bias really didn’t fade until the U.S. entered WWII and the Chinese became our allies in the fight against the Japanese.

Speaking of WWII, Franklin Roosevelt’s administration notoriously puts a ban on Jews entering the U.S. from Europe. One excuse was that FDR feared Nazi spies from entering with immigrant Jews, but really FDR was just trying not to anger Hitler before we entered the war. In 1939, the U.S. even turned away the St Louis ocean liner that had onboard nearly a thousand Jews hoping to find refuge from the Nazis. Many later ended up dead in Hitler’s gas chambers after FDR refused them entry.

Our other presidential Roosevelt, Teddy, also put a ban on a group of immigrants. In 1903 TR put the kibosh on people he feared were anarchists. This was during a time when anarchists were bombing targets all across the U.S. and killing Americans.

In two more cases, after WWII in 1950, Congress passed a ban on communists and Jimmy Carter banned Iranians during the Iranian Hostage Crisis in 1980.

There were also times when Catholics and Irishmen were frowned upon, and while no federal rule prevented them by name from coming here, many states and cities passed local regulations to prevent them from landing comfortably in the United States. Germans also felt the sting of this bias before the Civil War as did Nordic folks afterward.

And all this isn’t even to mention the restrictions on Europeans placed on those coming in through Ellis Island. Many Europeans were turned away for various reasons including health reasons. So, the door to the U.S. was never so wide open that everyone was welcome all the time.

Now, whatever you feel about these policies, whether you think they were good or bad, the fact is Emma Lazarus’ little artsy poem had absolutely no part in our immigration policy. Not even a tiny bit.

So, when liberals throw the words at you written decades after our nation was founded, almost two decades after the Statue of Liberty was dedicated, and amidst a series of restrictions on immigrants before, during, and after, and written by a socialist on top of all that, tell them of this article. Show them that they haven’t a clue what they are talking about.