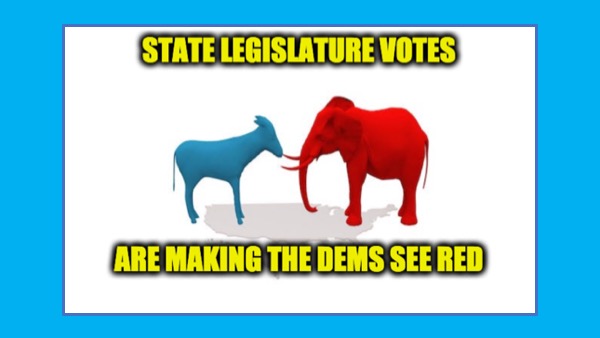 The Washington Post reported just days before the election that the Democratic Legislative Campaign Committee (DLCC) was “hoping to flip as many as seven legislative chambers this year” in an attempt at creating “a wall of power.”

Not only did the GOP resist those efforts (the progressive party has yet to flip a single chamber), but they managed to gain a majority in both chambers of the New Hampshire Legislature.

As Fox News reports, it was a historic failure for Democrats, “the last time fewer than five legislative chambers slipped was in 1946.”

Republican State Leadership Committee Deputy Executive Director David Abrams mocked Democrats for spending millions to flip state chambers. “So far, they don’t have a damn thing to show for it,” he gloated.

Joe Biden's win would give Democrats 4 years of power. State legislatures could give them 10. https://t.co/7QYqVIBL2i – @PhilMcCausland

Republicans With A Decade Of Power

The defense of state legislatures is a major victory for the Republican Party, with effects that can reverberate for a decade or more.

“Down-ballot races could define North Carolina politics — and those in Pennsylvania, Arizona, Iowa, Minnesota, Michigan, and even Texas — for the next decade,” NBC News reported just before the election, explaining why Democrats were desperate for the win.

“That’s because the winner will have the power to redraw state electoral maps now that the 2020 census is done,” they added.

Redistricting will help their party in congressional races.

NPR's story below is 1 of 4 key reasons why GOP gerrymandering is set to become even more potent than last decade, & I'll have a new post out on it soon https://t.co/QajSbNYYSV pic.twitter.com/ZUGFFL1N6N

Politico reports that Democrats’ “abysmal showing” in the election “put the party at a disadvantage ahead of the redistricting that will determine the balance of power for the next decade.”

Another Repudiation Of Obama-Biden?

It’s impossible to note the significant defeat for Democrats at the state-level without noting the similarities the last time it happened at historic levels.

That all happened under then-President Barack Obama with Biden as his vice president.

Obama would frequently remind voters that while he wasn’t on the ballot in 2010 or 2014, his policies were.

The American electorate responded by delivering historic losses for the Democrat Party at every single level of government.

Of course, Obama spent a significant amount of time on the campaign trail for Biden in recent weeks.

Perhaps it was a good reminder to voters about a legacy of failure, at least when it came to state votes.