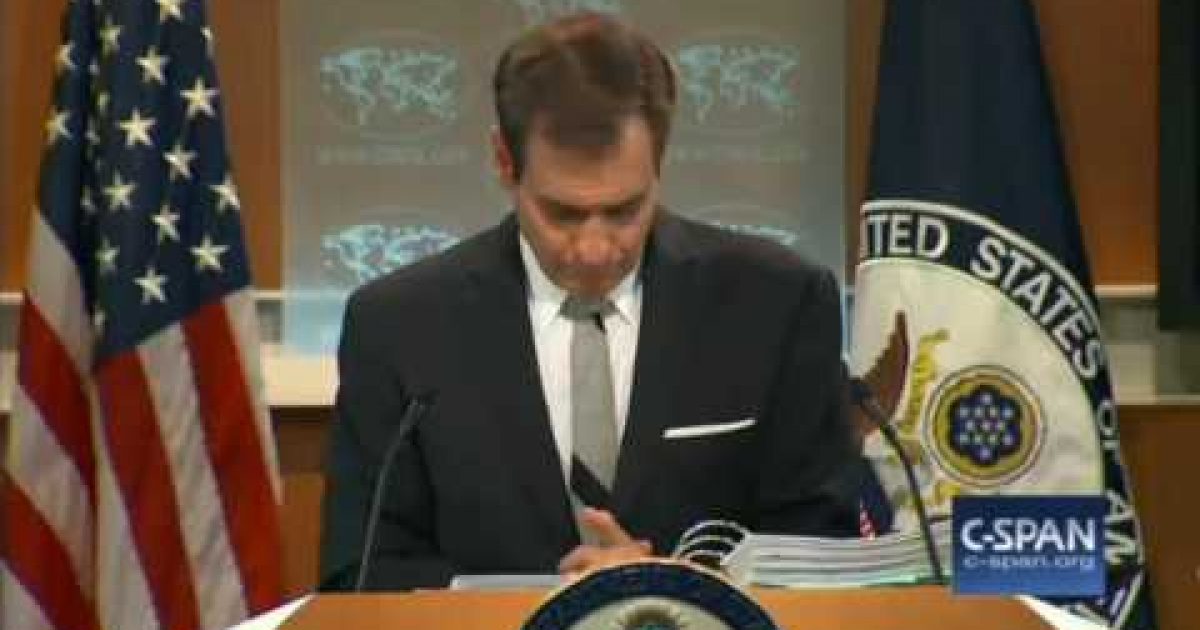 The Obama administration acknowledged for the first time today that the  $400 million payment to Iran was used as “leverage” in the release of several American prisoners. But don’t call it a ransom.

The State Department SPOX John Kirby admitted on Thursday that the US would not hand over $400 million in cash to Iran until it released four American hostages — two weeks after President Obama insisted the payment was not a “ransom.”

Kirby was asked at Thursday’s press briefing: “In basic English, you’re saying you wouldn’t give them $400 million in cash until the prisoners were released, correct?”

Kirby added, “Because we had concerns that Iran may renege on the prisoner release…we of course naturally…sought to retain maximum leverage until after the Americans were released. It would have been foolish, imprudent and irresponsible for us not to try to maintain maximum leverage. So if you’re asking me was there a connection in that regard in the end game? I’m not going to deny that.”

However Kirby continues to  maintain“the two negotiations were separate,” referring to the hostage release and arms deal.

U.S. officials wouldn’t let Iranians take control of the money until a Swiss Air Force plane carrying three freed Americans departed from Tehran on Jan. 17. Once that happened, an Iranian cargo plane was allowed to bring the cash home from a Geneva airport that day.

Additionally we learned from one of the freed prisoners, Pastor Saeed Abedini when he was interviewed:

“I just remember the night at the airport sitting for hours and hours there, and I asked police, ‘Why are you not letting us go,’ ” Abedini said. “He said, ‘We are waiting for another plane so if that plane doesn’t come, we never let [you] go.’ ”

Once it was established that the cash and the hostage release were connected, Brad Klapper of AP and James Rosen of Fox were trying to get Kirby to admit the hostage release was a quid pro quo for the cash, read the conversation below as John Kirby tap danced around the truth.

KLAPPER: Beyond saying there’s no ransom, you’ve said several times, a lot of people from different podiums in this government, have said there was no quid pro quo. What you just described is by definition a quid pro quo, is it not?

KLAPPER: How is it not? You said they would not get the money until they were released. Quid, quo.

KLAPPER: I mean, what am I missing in a quid pro quo that you have just outlined?

KIRBY: Brad, they were gonna get this money anyway, because The Hague Tribunal decided that they were going to get their money back. And-

KLAPPER: No, they hadn’t decided-

KIRBY: There was a negotiation inside The Hague Tribunal that they were going to cover the $400 million principal and then some interest that we negotiated, which saved the taxpayers a lot of money. That process was moving forward and it was moving forward on an independent track. Separately and distinctly we were also in talks with them about getting our Americans back. That was also done by a different team and moving forward. These two tracks came together in a very finite period of time.  And it would have been- given the fact that Iran hadn’t proved completely trustworthy in the past, it would have been irresponsible for us to not, since we- since we knew this payment was coming and coming soon, to not hold it up until we made sure we had our Americans out.

KLAPPER: Which is why everyone called it a quid pro quo at the beginning, and you disputed that. So I don’t quite understand how that changes anything. You’re saying it would have been imprudent not to link the payment, the delivery of the money, to the release of the prisoners, but you’re saying the delivery of the money wasn’t a quid pro quo related to the release of the prisoners because there’s a back story.

KIRBY: Because The Hague Tribunal had decided, the negotiation had been settled. That process was moving forward and would have moved forward regardless. But because it all happened in a short period of time, yes, we took advantage of that to make sure we had the maximum leverage possible to get our people out and get them out safely.

KLAPPER: So it was a quid pro quo?

KLAPPER: You took advantage of it and you made it a quid pro quo.

KIRBY: We took advantage of leverage that we thought we could have to make sure that they got out safely and efficiently.

ROSEN: So you were holding the Iranians’ money hostage?

KLAPPER: They paid the ransom. Because they released the prisoners.

ROSEN: Would you at least agree, John-

KIRBY: Look, guys, we had to, you know, if we hadn’t done that, and if for some reason the Iranians did play games and we didn’t get the Americans out, and we hadn’t tried to use that leverage, then I could understand the disdain and the criticism here. But this was a sound decision made in the end game of two separate negotiation tracks.

KLAPPER: I’m making no value judgment on the decision. I’m just trying to get you to say what it is, which is very simple.

KLAPPER: Listen, this happened in January and this if the first time you’ve ever said flat out that they wouldn’t get the money until the prisoners were released. That took, let’s count it, what, seven months? Why all the beating around the bush?  If it was such a great and noble decision?

KIRBY: The only reason that we’re having this discussion is because of the press coverage, Brad. We’ve said all along-

KLAPPER: So, evil reporters have made you dredge this up?

KIRBY: No. I’ve never called you guys evil, I’ve called you other things, but never evil.

KLAPPER: I mean, you can’t blame press coverage because you didn’t say what this was seven months ago.

KIRBY: We did describe it seven months ago.

KLAPPER: – flatly out that this was, this payment was contingent on the release of the prisoners.

KLAPPER: You did not say that in January.

KIRBY: I said this was, as I said before, we of course wanted to seek maximum leverage in this case as these two things came together at the same time.

ROSEN: John, you said that everyone all along, at all points, has been completely above board about this. But you would agree that what you’re telling us today represents a new factual disclosure from the administration, does it not?

KIRBY: I certainly would agree that this particular fact is not something that we’ve talked about in the past, but if you go back and look at the press coverage, your own coverage, of this when it happened, nobody made any bones about the fact that these two process [sic] were coming together at the same time and we took advantage of the opportunity we had, with the closure of the nuke deal, with The Hague Tribunal, and with talks to get our Americans back, we took full advantage of that, and I don’t think anybody in the administration is going to make any apology for having taken advantage of those opportunities to get these Americans home.

ROSEN: And would you agree that a reasonable observer could look upon a situation in which cash is withheld until prisoners are released, as something akin to ransom?

KIRBY: Well, an observer, whoever he or she may be, can look at this however they want. I’ve described now over the last 10 or 15 minutes what happened and what our thought process was going through that, and I’ll let others decide for themselves. I got to get going here, guys.