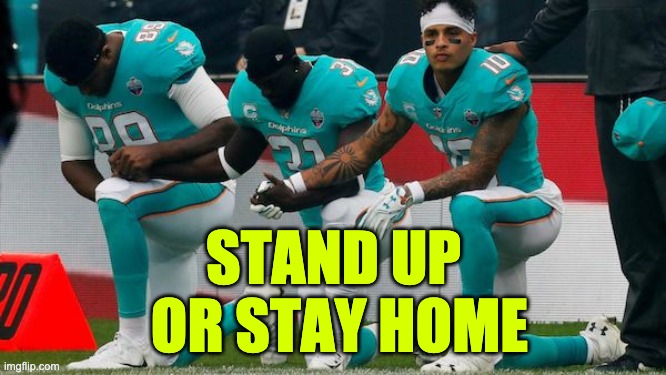 President Donald Trump has taken a hard stand against the kneeling of NFL players during the National Anthem by stating that he hopes the season doesn’t happen if they don’t stand for the song and honor the country. stand for the anthem

Trump had a chat with Fox Sports Radio on Tuesday morning, where he continued his now long-standing feud against the NFL over this issue.

Check out the details from The Washington Examiner:

The league is expected to host the season opener in less than a month. Several players have opted out of the upcoming season over concerns about spreading the coronavirus.

Many athletes are expected to kneel during this upcoming season after the issue of racial injustice was thrust back into the country’s spotlight following the deaths of George Floyd, Breonna Taylor, and Ahmaud Arbery.

Late in the 2016 season, the NFL underwent a seismic shift in their culture when Colin Kaepernick was allowed to disrespect the National Anthem with his political antics.  Kaepernick’s preferred method of disrespecting the song was to kneel. Still, his misguided temper tantrum spread throughout the league where a bevy of bratty, overpaid players found themselves doing all manner of things during the playing of the Star-Spangled Banner.  Stretching, chit-chatting with other players, and sitting on the bench were all behaviors observed by the American people who were absolutely outraged.

The nonsense continued into the 2017 season, fans turned away from the beleaguered league in droves.  Ratings plummeted.  Television advertisers jumped ship by the dozen.  The NFL failed miserably in the eyes of the We The People, and many Americans stopped watching the NFL. The revenue for the league and the networks took a dive. Things got so desperate, to stop the cash bleeding the last two weeks of Sunday Night football were canceled.

Now it seems the players will be trying to kill their revenue streams again. They don’t understand that the flag isn’t just a piece of cloth. It’s a symbol of the core principles and values of our nation, the beliefs and ideas that have allowed America to become the beacon of hope for the entire world.

It represents the freedom that we cherish, which has done so much for all of us. When these individuals kneel during the National Anthem, they are essentially saying they are ashamed of their country, which is a sign of disrespect not only to the flag and what it stands for, but to all those folks who have shed blood to protect the way of life it represents.

These players make millions playing a child’s game, an opportunity made possible by the principles they are eschewing by kneeling. It’s hypocritical and annoying.

The President is correct. If the players are going to start kneeling again, the league would be much better off not playing.