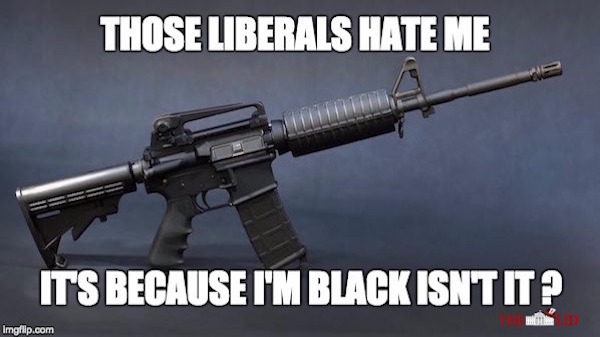 I’ve known Stacy Washington for almost as long as I have been blogging, she is a warm friendly person, a talented conservative writer, an excellent radio host, and a patriot who has served this country in the USAF.

Last week Stacy ran into a bit of a problem. She had a gig writing a column for the St. Louis Post Dispatch. Her April 28th column defended the NRA against charges that it was worse than ISIS and accused the mainstream media of lacking a diversity of thought regarding gun ownership.  A leftist editor named Tod Robberson decided to suspend her for writing the column accusing her of having inaccuracies in the column and not revealing that she had a professional relationship with the NRA. Knowing that she was being unjustly disciplined upon being told about her suspension Stacy Washington resigned from the paper.

In a column called, “Guns and the Media,” Washington points to what she calls “the homogeneity of America’s newsrooms” when it comes to gun owners. She also called out by name George Kennedy a former professor at the University of Missouri’s School of Journalism.  Kennedy (who can’t be related to the actor of the same name because he lacks talent)  wrote a column in the April 20th  Columbia Missourian claiming the NRA was more dangerous than ISIS. As a dues paying member of the organization I can assure you that the NRA has never ordered me to behead Christians or sell women as sex slaves.

I know what you are thinking, no one could be that liberal, ignorant, or hyperbolic to believe that the NRA is worse than ISIS. However it’s true, unless he was lying Kennedy believes what he wrote. Even worse is the fact that along with writing the column, this shmegegge was a professor teaching future journalists, which may explain the state of today’s main stream media leftist bias. Note, for those who are Yiddish challenged,  shmegegge means buffoon. My late mom always taught me if you can’t say anything nice, say it in Yiddish.

Along with a feeling of incredulity about Kennedy, it is natural to also be thinking that no newspaper editor could be that ignorant– that biased as Tod Robberson was to suspend a columnist for defending the NRA against a nonsensical slander. But this is America –where stupidity is allowed–and sadly as comedian Ron White is famous for saying, “you just can’t fix stupid.”

Robberson’s assertion that there were errors in the column were a figment of his leftist imagination. Read the column yourself you will see that it contains outright errors of fact, no wild exaggerations, etc.. And as for not revealing her relationship with the NRA to the newspaper, perhaps the editor should read his own paper.

For example,  this particular article which appeared in his paper less than three months before Stacy Washington joined the paper. 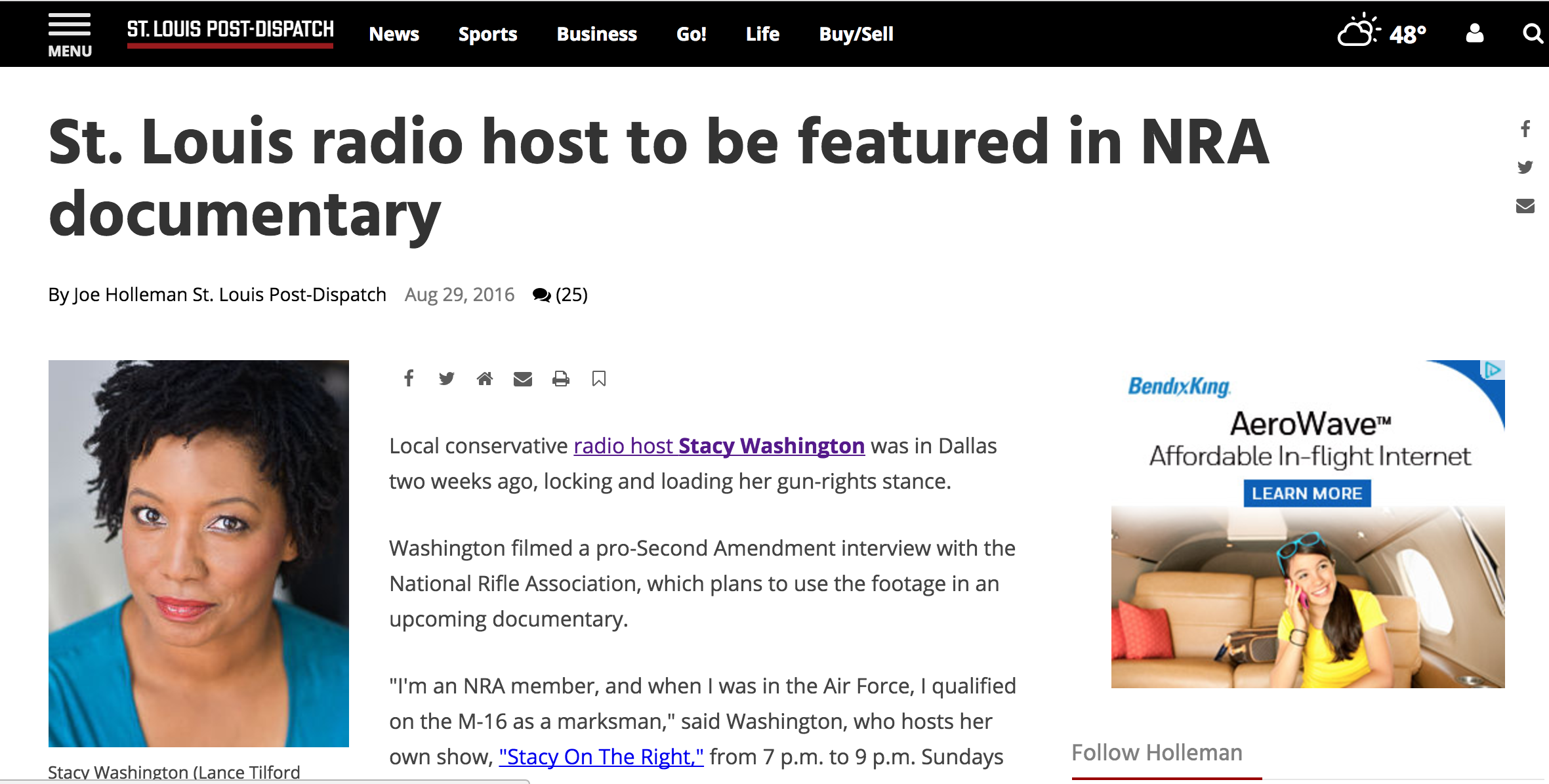 Along with talking about the documentary, this piece published before Stacy Washington started writing for the paper said:

“This is not Washington’s first work for the NRA; she regularly appears on NRA News, a show on Sirius Radio.

She also is not the first STLer to put face to film for the gun group. Nationally syndicated radio host Dana Loesch, who now lives in Dallas, has done several videos for the armed cause.”

A second column, that ran six weeks before her first column in the Post Dispatch, mentioned Ms. Washington‘s relationship with the NRA again.

“Last month, she filmed an interview with the National Rifle Association for a pro-Second Amendment documentary.”

When I went to the Post Dispatch website to read the above article, I found someone else who had a professional relationship with the NRA–the paper itself.

A search of NRA on the St. Louis Post Dispatch website, also turned up this advertising insert that ran in the paper: 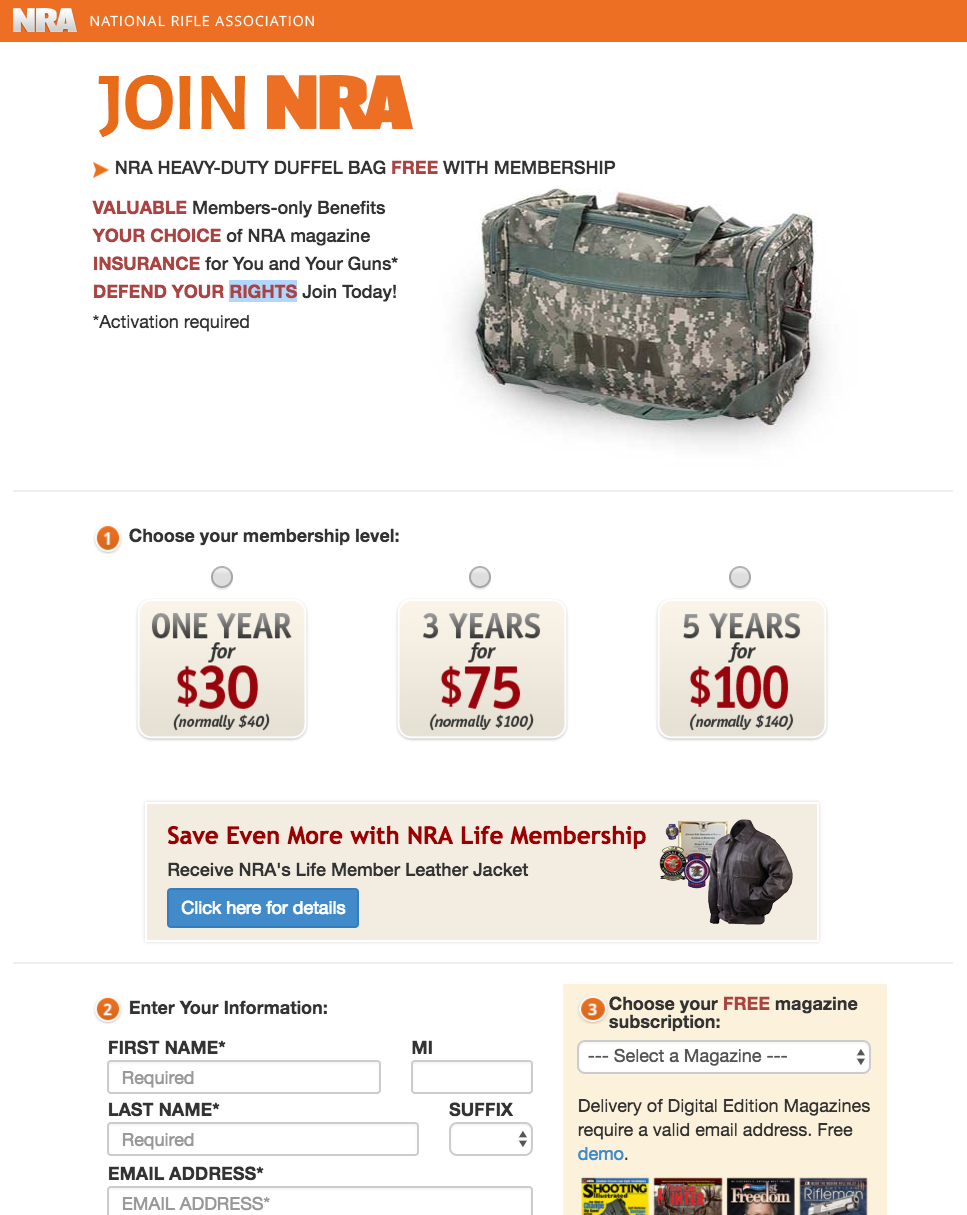 And by the way, Stacy was honest with her readers about the fact she is a gun enthusiast. In her initial Post Dispatch column, she described how important the second amendment was to her:

“With my father on active duty, guns were always a part of life, so I considered the Second Amendment second in importance only to the religious protections afforded to us in the Constitution.”

Nevertheless in two columns before she joined the paper Stacy Washington was described as someone who had a professional association with the NRA, and in her very first column she related the importance of the second amendment to her.

The bottom line is that or Tod Robberson to claim he didn’t know Stacy Washington had a professional association with the NRA, he had to be suffering from some type of dementia, or possibly some mental disorder due to having a feeling of inadequacy because his parents named him Tod but didn’t love him enough to give him two “d”s in his first name. The only other options are that he hates the NRA, or hates Stacy.

But the rationale for his action isn’t really important. The important part is that Tod Robberson did what he accused Stacy Washington of doing—he lied the paper’s readers. In doing so he deprived the readers of the opportunity to read Stacy Washington’s column every Friday. But they don’t really have to miss out (and neither do you). Stacy Washington’s radio show (Stacy on the Right) is syndicated by Urban Family Talk.  You can listen to it live; Mon-Fri from 2-3 PM and Saturdays from 4-5 PM, either on one of the broadcast stations or at Urbanfamilytalk’s website You can also read her written pieces at her great website  StacyOnTheRight.com, and follow her on twitter @staceyontheright and Facebook.