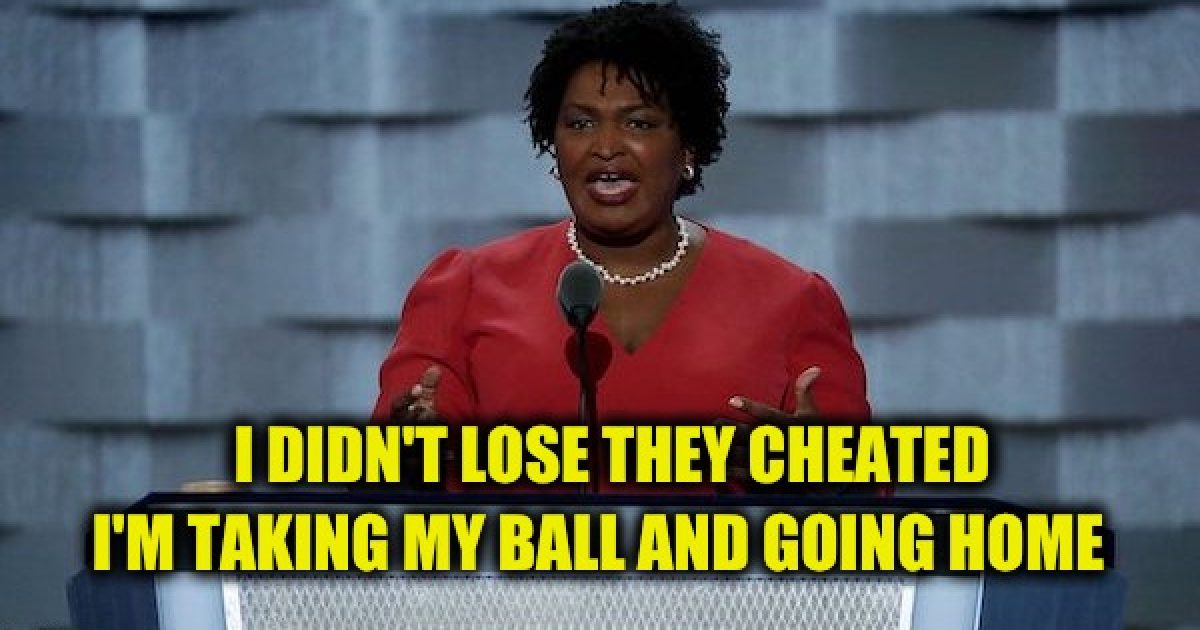 Maybe they are tired of pushing the false claim that President Trump wasn’t legitimately elected. Because now it seems that many Democratic Party leaders have switched and have joined losing gubernatorial candidate Stacy Abrams acting like childish crybabies declaring that the only reason she lost the Georgia race was the other guy cheated.

The local protests about the Georgia results started about the same time big shot Democrats cried foul with no evidence.

Georgia State Senator Nikema Williams was arrested Tuesday as protesters filled the State Capitol to demand ballots be recounted from last week’s election, including the hotly contested race for governor.

The Democratic state senator was hauled off to Fulton County jail as supporters of Stacey Abrams tried to persuade officials to count thousands of disallowed votes so she could force a runoff against Republican Brian Kemp.

It is the latest in a long line of examples in which Democrats seem incapable of accepting election results and are trying to rewrite history from last Tuesday.

Williams was led out of the rotunda with hands zip-tied behind her back after Capitol police ordered the protesters out. Lawmakers had met to discuss disbursing funds for hurricane relief when the mob activity broke out. The law prohibits people from interrupting the state legislature with “loud, threatening, or abusive language.”

This morning police arrested state Senator Nikema Williams during rally at the Capitol demanding every vote be counted. via @MurphyCBS46 pic.twitter.com/XbyYaH5TvZ

Breaking the Law While Complaining About Supposed Election Corruption

Williams’s arrest comes while nationally recognized Democrats are trying to portray the election system in Georgia as corrupt.

Sen. Sherrod Brown, an Ohio Democrat, recently claimed that if Abrams isn’t declared the winner of the gubernatorial contest, it’s because Republicans stole the election.

The official Democratic party line is that if a Republican wins they must have cheated if a Republican sees voter fraud, they’re racist trying to prevent everyone from having a voice.

This is how unhinged Dems are right now. @SherrodBrown thinks that just because they lost the #GAGov election, that means Republicans stole it. As Americans we have to accept the results of elections even if they don’t go our way. This is dangerous. https://t.co/eE4wK9C87R #gapol

Hillary Clinton, the queen of being utterly incapable of accepting election results, claimed Abrams would have already been declared governor “if she had a fair election.”

.@HillaryClinton: “I know @StaceyAbrams well – she was one of my really strong surrogates in the campaign. If she’d had a fair election, she already would have won.” https://t.co/Y3wmlnHCBT pic.twitter.com/4f40svxi6i

On the bright side, crooked Hillary wasn’t talking about the 2016 presidential election for a change.

Yet, here we have a Democrat breaking actual laws in an attempt to get ballots that have been declared null and void added to the recount. Where’s the integrity in this election? It’s certainly not coming from Abrams corner.

You’re going to be shocked to hear this. Williams, a Democrat African-American female, believes she was arrested because … wait for it …

“There are countless Georgians who cast their ballots and still don’t feel like their voices are heard,” she said in a statement. “I joined them down on the floor, and I was singled out as a Black female senator standing in the rotunda with constituents.”

Williams was so “singled out” that 14 other people were arrested alongside her.

Lo and behold, here’s a couple (courtesy of CBS 47) who joined Williams in the clink: one who is most decidedly not a female, and the other who is not black but is willing to dress up in a mock orange face to protest President Trump.

The fact is, Williams wasn’t arrested because she’s black, or female; she was arrested because, like so many in her party, she has no respect for laws and those who enforce them.

But then again Stacey Abrams says she lost because of racism and voter suppression.

In the end, Stacey Abrams showed herself to be a crybaby sore loser.  She lost by about 54,723 votes and believes that the election was stolen from her. With 100 percent of precincts tallied, the state’s official election website showed Governor-Elect Kemp with 50.22% of voters or 1,978,408 votes. Abrams, by comparison, had 48.83 percent, or 1,923,685.

While she declared the election over she refused to concede:

“I acknowledge that former Secretary of State Brian Kemp will be certified as the victor in the 2018 gubernatorial election,” Abrams said in a fiery 12-minute address. “But to watch an elected official … baldly pin his hopes for election on the suppression of the people’s democratic right to vote has been truly appalling. So let’s be clear,” Abrams concluded, “this is not a speech of concession.”

During an interview with CNN’s Jake Tapper on “State of the Union,” Abrams said Kemp was “the person who won an adequate number of votes to become the governor””

“You’re not using the word legitimate,” Tapper said. “Is he the legitimate governor-elect of Georgia?”

And am I the only one who notices that in Florida the MSM were demanding that Republicans explain where is any proof of fraud (it’s here guys), but no one is asking the Democratic Party where’s the proof of fraud or voter suppression in Georgia?