For Some. Southwest Is The Grinch Who Stole Christmas 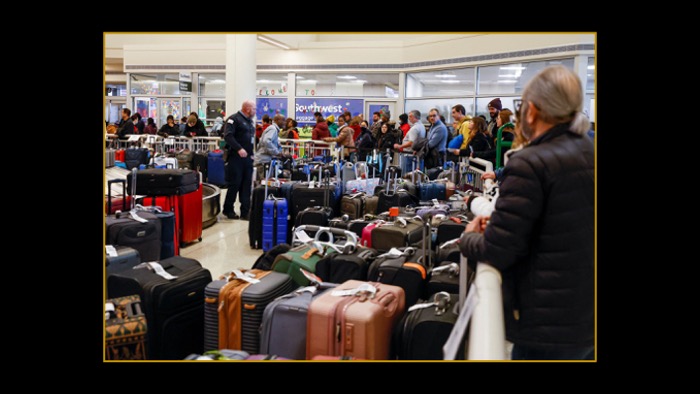 Over this joyous holiday weekend, a massive and turbulent bit of angst has been simmering at our nation’s airports.

Southwest Airlines, a popular, quasi-budget air travel provider, appears amid some sort of implosion, with a large winter storm acting as the first domino to fall.

Southwest Airlines scrubbed thousands of flights again Tuesday after the massive winter storm that wrecked Christmas travel plans across the U.S. The federal government said it would investigate why the company lagged so far behind other carriers.

A day after most U.S. airlines had recovered from the storm, Southwest called off about 2,600 more flights on the East Coast by midafternoon. Those flights accounted for more than 80 percent of the 3,000 trips that got canceled nationwide Tuesday, according to tracking service FlightAware.

And the chaos seemed certain to continue. The airline also scrubbed 2,500 flights for Wednesday and nearly 1,200 for Thursday as it tried to restore order to its mangled schedule.

At airports with major Southwest operations, customers stood in long lines hoping to find a seat on another flight. Some tried to rent cars to get to their destinations sooner. Others found spots to sleep on the floor. Luggage piled up in huge heaps.

Late Monday, the Transportation Department tweeted that it would examine “Southwest’s unacceptable rate of cancellations” and whether the airline was meeting its legal obligation to help stranded customers.

Southwest spokesman Jay McVay said the cancellations snowballed as storm systems moved across the country, leaving flight crews and planes out of place.

“So we’ve been chasing our tails, trying to catch up and get back to normal safely, which is our number one priority, as quickly as we could,” he told a news conference late Monday in Houston. “And that’s exactly how we ended up where we are today.”

Southwest’s troubles will likely continue well into the New Year, with many travelers unable to reach their final destination for several more days still.