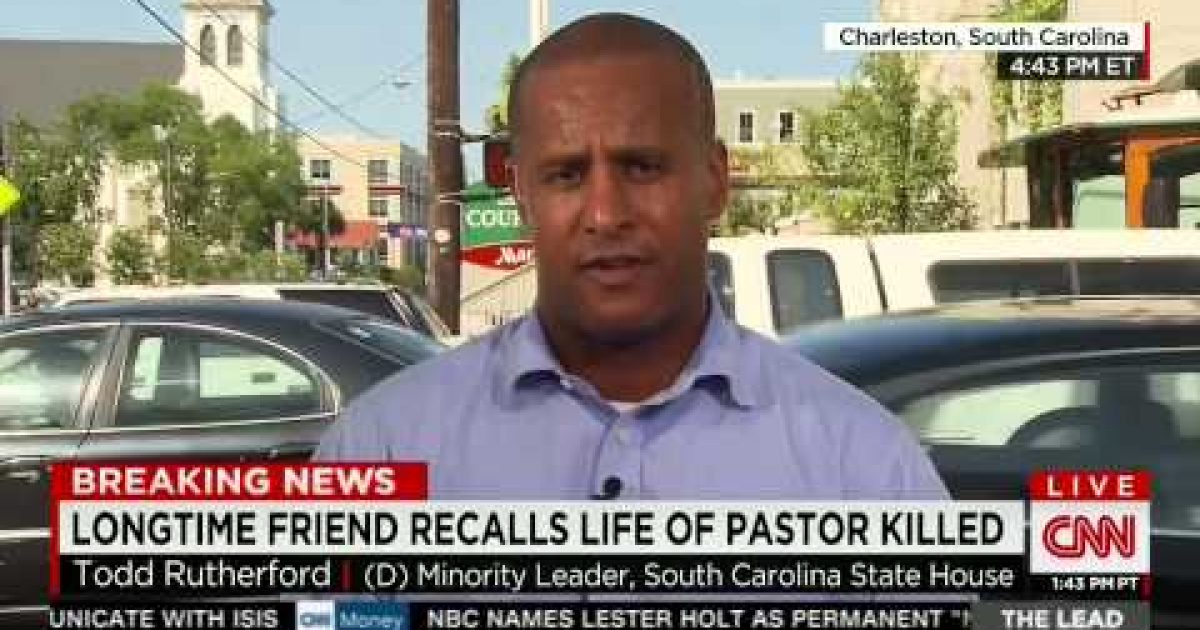 According to J.Todd Rutherford Democratic member of the South Carolina House of Representatives, the horrible man who massacred nine people in a church last night Dylann Roof is not guilty of a crime. Rutherford appeared on “The Lead” with Jake Tapper Thursday afternoon and blamed the shooting on the fact that South Carolina flies the confederate flag by its state house, does not have a hate crimes law, and of course the “coded language” broadcast on Fox News.

If one is to follow Rutherford’s argument than the psycho who shot up the church should be immediately released, after all it wasn’t his fault the blame should be placed on Roger Ailes. This reluctance to place personal responsibility on the people who commit crimes is one of the reasons we have shootings like what happens in Charleston.  The shooting had nothing to do with Fox News and everything to do with the maniac who did the horrible act.

Read the transcript and watch the video below:

Rutherford: The president called me this morning and wanted to wish condolences on behalf of himself and the first lady for Senator Pinckney, the church family and the community at large. He was telling me then — this was before the young man was caught — that all the assistance the federal government could offer would be given to make sure the person was caught. As we know, he was. We thank the president for that. The president wanted to make sure we had everything we needed, and of course right now we do, and we’re grateful for that. The problem is this, the rhetoric in South Carolina, the rhetoric nationwide has led people to believe like this young man, it’s okay to walk into a church and take nine lives. It’s okay to take the life of a state senator, it’s okay to sit in a church and pray with people for an hour before you decide to take their lives. That’s not okay. It needs to change.

Tapper: Tell me what you mean, sir, when you say the rhetoric nationwide has had this impact on this twisted racist maniac who made this act. What rhetoric, are you talking about?

Rutherford: South Carolina is one of five states that does not have a hate crimes law. South Carolina is the only state that I am aware of that still flies a confederate flag in front of the statehouse dome. South Carolina represents and is emblematic of the problem, which is, words can come from these networks that broadcast what they call news, but it’s not. It’s really hate speed and coded language and leads people to believe they can walk into a church, because it’s no longer a house of God, but a killing ground. It’s a place they can feel free to desecrate and leave blood everywhere, and that’s what this young man did. He did so on some ill-gotten belief, on a wrong belief that it’s okay to do that. He hears that, because he watches the news and things like Fox News, where they talk about things that they call news, but they’re really not. They use that coded language, they use hate speech, they talk about the president as if he’s not the president. They talk about churchgoers as if they are really not churchgoers. And that’s what this young man acted on. That’s why he could walk into a church and treat people like animals when they are really human beings.